It has been a fairly newsy week this week, from Washington to Wall Street. The main event has been the fight over Trump’s Tax Cut plan, with news yesterday that Republicans likely had enough votes in the Senate to pass the plan, which resulted in gains in the S&P 500 (SPX) yesterday at its highs of nearly 2.25% on the week. This morning news of former National Security Advisor Mike Flynn’s plea deal with the Special Prosecutor investigating the Trump campaign’s ties to Russia quickly caused investors to weigh which was more important, sending the SPX down 1% in a quick. 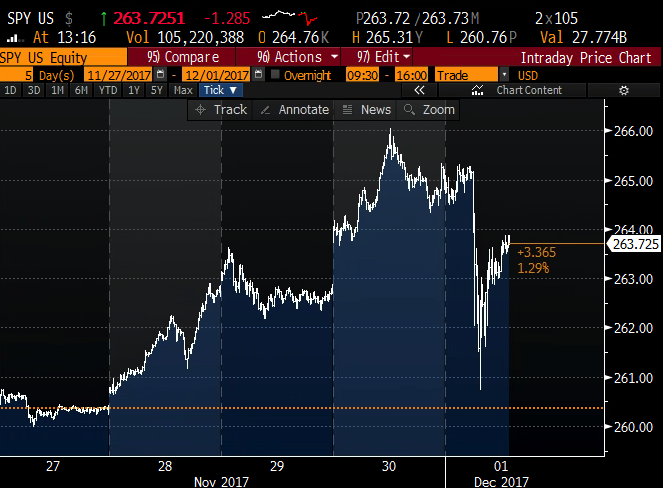 As I write the market has recovered a bit, but I wonder if we get a sort of sell the news if the bill does pass, as the news cycle this weekend will be dominated by whether or not Flynn will be ratting out his former boss.

From this point on, I’d be very surprised if the SPX has much more to the upside in 2017 and I worry that early January could see some sharp selling pressure as investors might look to offset paying taxes on gains in the new year where it looks like tax rates will be lower.

While short-dated options prices in the SPY, the etf that tracks the SPX have shot up this week from multi-week lows, options prices in dollar terms still look relatively cheap for those looking to slap on some near-term protection on an index that is up more than 20% in the last year. 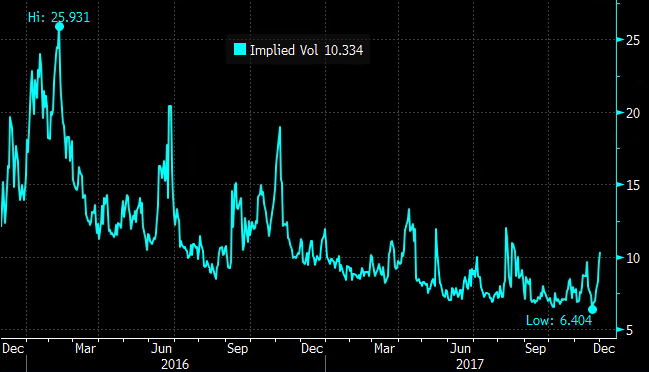 30 day the money implied volatility at 10.3% is starting to get near 1% daily implied movement, and if this week’s sell-off in leadership sectors like semis and FANG are a sort of preview of what could come to the S&P 500, then 10 vol will be cheap… just look where options prices were in Q1 2016 in the SPY (above).

To my eye, a pullback to $250 in the SPY would mark a 5% sell-off, something the market has not done peak to trough in more than a year, its longest period without doing so in more than 50 years. $250 looks like a reasonable downside target, which is the intersection of the early October breakout and the 1yr uptrend: