Yesterday on CNBC’s Fast Money I quickly detailed a short-term bullish trade that I saw trade in the market in the S&P Regional Bank etf, the KRE, click here to watch: 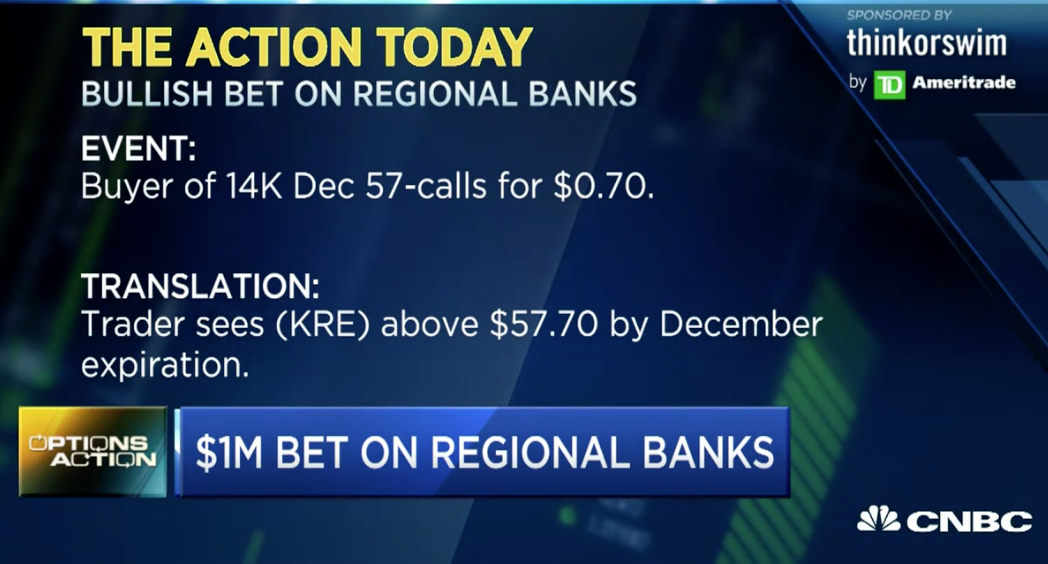 When the etf was trading $56.11 shortly after the open yesterday, there was an opening buyer of 14,000 of the Dec 57 calls, paying 70 cents. These calls break-even at $57.70 up about 3% from the trading level. Regular readers know that we do not place any special emphasis on unusual options activity as we have no idea what the trader’s intent may be or what the options may be against (an existing position etc). But we do find such activity useful as it relates to idea generation, identification of potential market catalysts and sentiment. In this case, without any identifiable single stock catalysts for bank stocks in the next couple weeks I suspect this trader is targeting the Fed’s Dec 13th meeting where Fed Fund futures are pricing a 95% chance of a quarter-point rate increase, which some feel should be beneficial to regional banks as net income margins could improve during a rising rate cycle.

The technical set up lends credence (if in fact the call purchase above is an outright bullish bet) to the choice of strike with a break-even at $57.70. If the KRE were to run into the Fed’s Dec 13 meeting, targeting a breakout above $58 looks like the way to play.

Taking a longer-term view the stock’s consolidation this year after the late 2016 breakout looks like a fairly healthy bullish flag that might be setting up for another leg higher in 2018, especially if we have an improving economy with a gradually rising rate environment:

So what’s the trade? If I were inclined to play for a breakout in the new year, I might consider selling short-dated out of the money calls helping to finance the purchase of out of the money long dated calls.

Break-Even on Dec expiration: This trade performs best with a gradual move towards the 58 strike over the next couple weeks. If the stock is below 58 on Dec expiration the short Dec 58 call will expire worthless and the and the trade will be left naked long the March 58 call. If the stock is close to $58 then the March 58 call should have appreciated as it will have picked up deltas. At that point it might make sense to further reduce the premium at risk by selling a higher strike call in March turning the trade into a vertical call spread. The max risk f this trade is the $1.40 premium paid, and would be at risk with a large move below the current level, or well above the 58 strike.