Last week prior to Square’s (SQ) Q3 results we had the following to say about the stock’s eye-popping year to date performance: 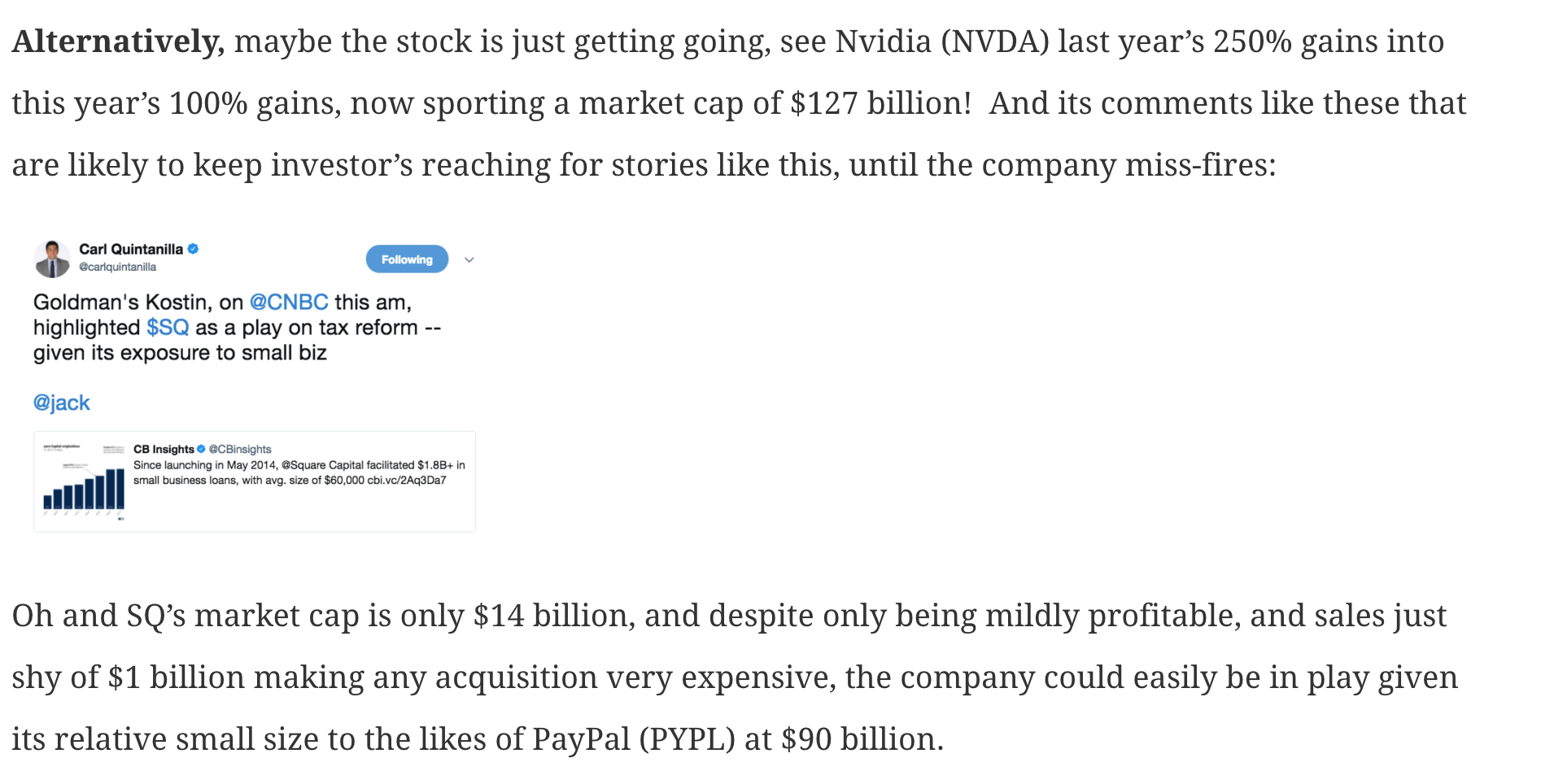 The stock is making new all-time highs as I write, placing this year’s gains at 205%. The latest bout of enthusiasm is based on the company’s guidance which was greater than expected, per Bloomberg:

Oh and of course Bitcoin!! The company on Tuesday announced an experiment with letting Square Cash App users buy and sell Bitcoin:

“We’re exploring how Square can make this experience faster and easier, and have rolled out this feature to a small number of Cash app customers,” the San Francisco-based company wrote in a statement Wednesday.

Jim Cramer sat down with Square’s CFO (and likely air apparent to CEO when Jack Dorsey goes all in on Twitter) on last night’s Mad Money to discuss the company’s wide-ranging success and their embrace of crypto, definitely worth your time (click image to watch): 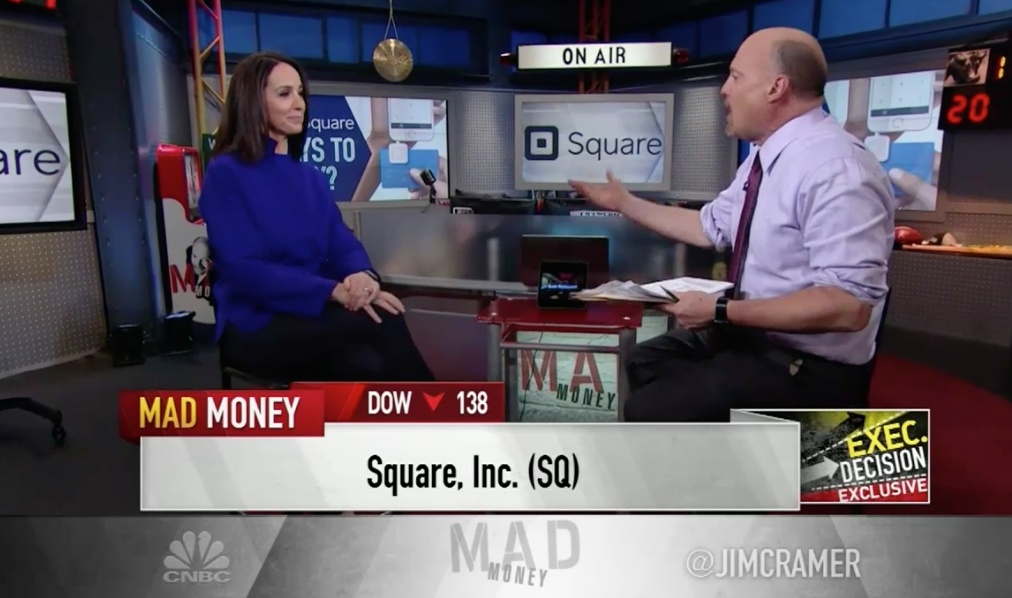 In the interview, Cramer references the Credit Suisse research note speaking about the potential opportunity for Square adopting crypto as a form of funding or payment, here are the highlights (new risks, but large possible upside), a view from an analyst who rates the stock a Neutral with a 12-month price target of $31: 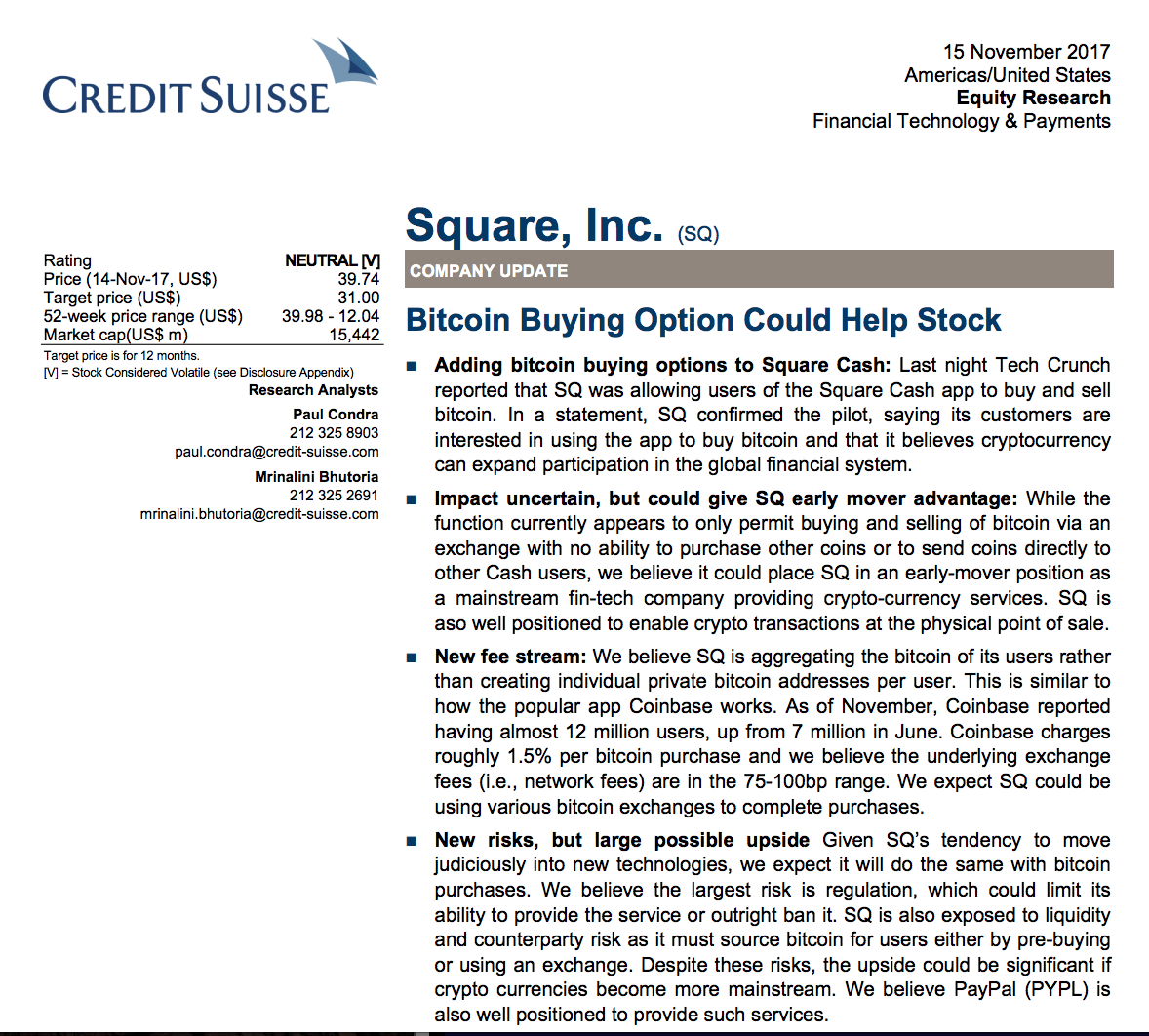 So my take on the stock is fairly simple, the company is doing little wrong, shown signs of risk-taking that might yield outsized rewards, and investors are willing to share some of that risk. For those who are asking can this stock continue its torrid gains in 2018 then I think the NVDA example above is worth keeping in the back of your head. But what about between now and year end? Without a broad market sell-off I see little reason why this stock will not keep going higher, and as long as Bitcoin keeps its upward momentum and broader adoption then the investor will clearly get a little giddy about the opportunity for SQ in 2018.

Its also important to note that while Bitcoin has been volatile this year with a few 20% peak to trough declines, the digital currency is now about to make a new all-time high, placing its ytd gains at 677%, sporting a market cap of $128 billion, equal to that of NVDA!

At this point, I would be shocked if this stock does not tick the nice round number of $50, but I would not buy it here with my worst Twitter troll’s money…

Outright Bullish: If I were inclined to play for a run up to arguably random $50 level between now and the year I end I might consider the following defined risk strategy:

Rationale: risking a little less than 5% of the stock price, a stock that is up 205% ytd to make up to close to 15% if the stock were to rally to $50 between now and the end of the year.

Kind of Bullish: Or If I were inclined to play for a near-term consolidation and a breakout in the new year I might consider a call calendar:

Break-even on Dec expiration: this trade plays for a consolidation of gains in and around 45, with the ideal scenario that the stock is 45 or slightly lower on Dec expiration and having that short call expire worthless, having helped finance the Jan 45 call, which should also pick up deltas as the stock moves closer to strike. This trade is a bit trickier but only risks 90 cents in the event of a large move above the strikes or below current trading levels.