On Friday’s Options Action on CNBC we quickly previewed the General Electric (GE) investor day (that is going on as I write). I offered a defined risk way to play for a bounce into the new year thinking that today’s news that would likely include a guide lower on earnings, the possibility of the much-rumored dividend cut and that those things could provide the final capitulation on the news front and in the stock. The idea there was that with the stock down more than 35% on the year, investors might start to discount the company’s fundamental issues and consider GE as a decent “Dog of the Dow” candidate into the new year. Click through here to watch: 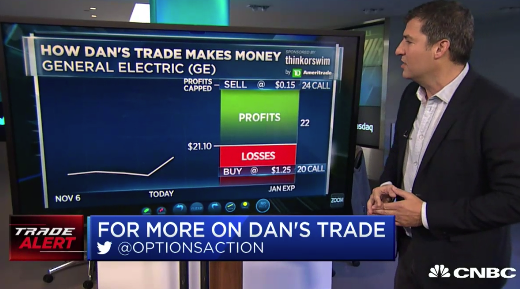 As the trade idea was given after the close on Friday, and the stock opened lower than Friday’s close and immediately dropped I will detail this trade idea at current prices:

Rationale: This is clearly a contrarian trade, and the news might get worse before it gets better which is why it makes sense to define one’s risk. At this point it may not make a ton of sense to sell the 24 call at 6 cents, but as described in the clip from Friday, options prices are steep so it makes sense to look to offset some decay on the 20 strike