Tomorrow, after the close, Snap Inc. (SNAP) will report their Q3 results, only the third report since going public in March of this year. The options market is implying about a $2 move in either direction (or about 13%) between now and Friday’s close (most being priced for Wednesday’s earnings reaction). The stock declined greater than the implied move the day following the last two reports, down about 14% on Aug 10th after the Q2 print and down about 21% on May 10th after the Q1 print.

The $2 implied move lines up pretty well with technical resistance and support on the chart, despite having very little to go on. On the upside, the $17 ipo price might serve as resistance as it was the breakdown level in July, and also the four-month high last month. While the Sept low near $13 might serve as near-term support:

Shares of SNAP are down nearly 12% from its IPO price, and down nearly 50% from its post IPO highs made on March 3rd. Investors and Wall Street analysts alike remain skeptical, with short interest at 24% of the float, and analysts overwhelmingly on the sidelines with 5 Sell ratings, 20 Holds and only 9 Buys with an avg 12-month price target of only $15.

One of those brave Buy rated analysts, RBC Capital’s star Internet analyst Mark Mahaney (who has a $20 twelve month price target), highlighted the following things to watch in the quarter in a note to clients on Friday: 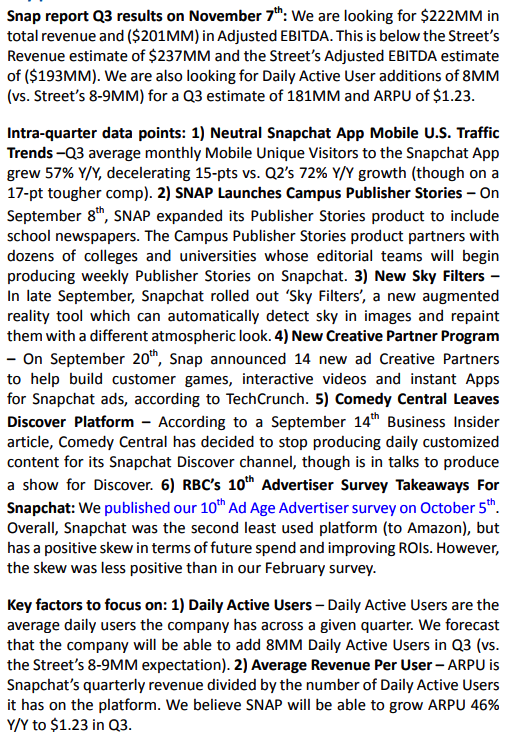 So what’s the trade? I am hard pressed to think that the SNAP’s management’s messaging will improve dramatically from last quarter, and I would also be surprised to see a meaningful acceleration in the metrics that so disappointed investors last quarter, or hear that the company has charted a quicker path to profitability. Nothing that big changed significantly in three months. However, I am optimistic about this young company’s prospects, its products and its opportunity. I think it is important to consider how few social properties there are with an audience greater than 100 million daily active users. While investors have been disappointed about the company’s stunted growth this year following Facebook’s copycat behavior of SNAP’s core offering, that same willingness to copy is also a reason I expect this company to get bought by a larger tech or media company, similar to my belief that Twitter will also be acquired.

Additionally, Snap is one of the few social media companies that will avoid the worsening headlines of fake news, Russian bots and Neo-Nazi trolls (plaguing companies like TWTR, FB and GOOGL) as they’re not really in that game.

All that said, and in the meantime, and miss and squishy guidance and I suspect the stock is on its way back towards $12.50 – $13.

Therefore any directional plays should define risk, even with options prices elevated. One way to offset elevated options prices playing for a post-earnings decline inline or greater than the implied move would be with a weekly put butterfly:

If you are inclined to play for a short squeeze on a surprisingly better than expected quarter and guidance then you might want to give yourself a little more time for the squeeze to play out, not too dissimilar than the post-earnings move we just saw in TWTR.