Since making a new all-time high in early June, shares of Starbucks (SBUX) have declined 15%, and are actually down 1% on the year vs the S&P 500 (SPX) which is up on the year, seemingly making new all-time highs daily. Since gapping lower to the tune of 9% on July 28th following the companies’ fiscal Q3 results the previous evening (that were highlighted than better than expected same-store sales in the Americas, but lower fQ3 guidance SSS guidance), the stock has spent the better part of the last three months trading between $53 and $55:

The recent consolidation and next week’s fQ4 earnings report got me considering what the conditions might be for the stock to breakout and attempt a gap fill? First, it makes sense to recognize what has caused the relative underperformance this year, and for starters, it might have had something to do with overly positive sentiment in front an unexpected weak guide given by the coffee seller. Prior to fQ3 earnings, and the three subsequent analysts downgrades (from buy to hold) there were 34 sell-side analysts covering the stock, 29 had Buy ratings and only 5 Holds with NO sell ratings (still none).

The day after the results Stifel analyst Mark Astrachan downgraded the stock from Buy to a Hold citing:

The number of active My Starbucks Rewards members is still rising — up 8% to 13.3 million people in the latest quarter — this expansion marked Starbucks’ slowest ever rate of growth.

The company’s membership program helps draw customers back to its stores by giving them free drinks if they make a certain number of purchases and sending them notifications to keep the brand on their minds. Management has said that continued expansion of the My Starbucks Rewards program is key to the company achieving its targets for sales growth at established locations

A few days after the print, Guggenheim Securities went from Buy to Hold citing the potential for another guide lower in SSS, per Barron’s:

We view this as a harbinger Starbucks management’s next update will lower long-term EPS guidance from 15%-20% (set in December 2016) to 12%-15% as mid-single digit (MSD) SSS has shown to be unsustainable despite the heightened investment in labor, technology and product innovation. With three of the four quarters in fiscal 2017 possibly yielding about 3% U.S. SSS, MSD SSS may be more of a stretch goal off today’s elevated store volumes.

And in early August, BMO Capital Markets downgraded the stock from Buy to Hold citing long ago cited cannibalization risk by The Simpsons, per WSJ:

cannibalization concerns in the U.S. Analysts mapped U.S. locations over the past one-, three-, and five-year periods, finding increased instances of overlap. “Not only does this analysis reveal challenges to reaccelerating the comp trajectory, but it also may imply the pace of U.S. development should be slowed going forward,” wrote analysts, led by Andrew Strelzik. Overlap with competing premium coffee purveyors also increased after remaining largely unchanged from 2012 to 2014. Specialty beverage orders in the U.S. have begun to decline, limiting the contribution from this part of the menu. And growth in breakfast sandwiches is slowing. Increased U.S. labor hours, up 10% over the last four to five years, is another margin risk.

Next week, on November 2nd after the close, SBUX will report fQ4 results and likely give 2018 guidance, which will largely determine whether or not these concerns are warranted. If they were, the stock is most certainly going to have another leg lower, possibly testing its 52-week lows near $51. But if the company were to beat their already lowered same store sales expectation, and just leave consensus in place for 2018 (16% eps growth & 10% sales growth) then the stock is likely to gap higher in an attempt to fill in the July earnings gap to the $59-$60 range.

The options market is implying about a $2.15 move between now and next Friday’s close, or about 4% in either direction. On Thursday’s close, just prior to earnings, if the stock were at $55 where it is now, I suspect the at the money straddle (the call premium + the put premium) would probably be around $2. The stock has sold off the day following the last three reports (down 9%, 2% and 4%, but the 4% implied move is essentially inline with the average one day post-earnings move over the last four quarters, and a tad above the 10 year average one day post-earnings move of 3.5%.

My inclination would be to play for a gap fill, not too different in what we saw this week with Nike (NKE) following its analyst day. NKE had similar gap following Foot Locker’s earnings miss in mid-August, but has since found its footing, rallying 10% from its 2017 lows made earlier in the month: 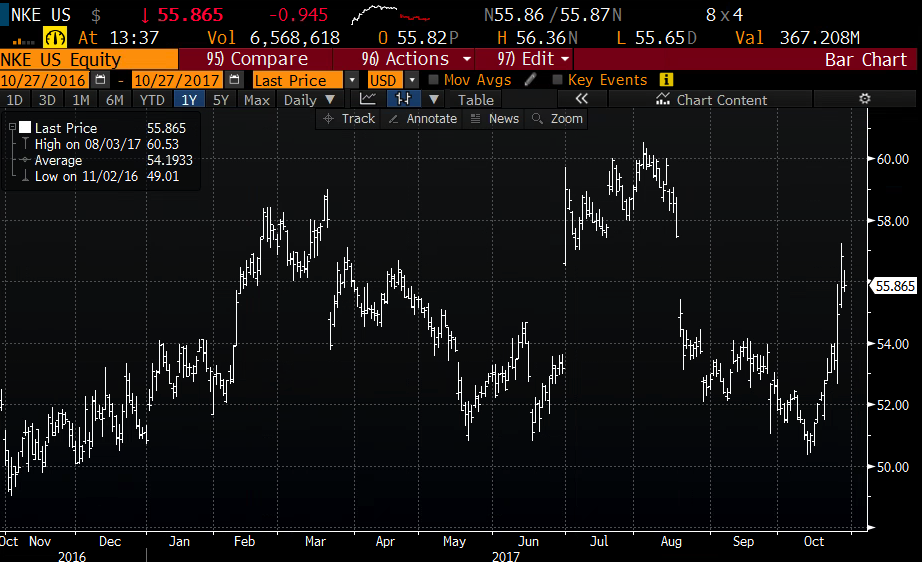 Rationale – This call spread defines risk to 1.30 (less than the expected move on earnings) but has a breakeven 1.30 higher in the stock. It targets a gap fill higher which could take the stock to 58 or higher, with 60 a good target into year end of the stock gets going. If the stock sells off following the report the most that can be lost is 1.30 and it’s unlikely that with a Dec expiration the trade is worthless even if the stock does sell off on the event.