Tonight after the close, the AG in FAANG report Q3 earnings, Amazon (AMZN) and Alphabet (GOOGL). The two stocks have a combined market capitalization of $1.17 trillion and makeup nearly 16% of the weight of the Nasdaq 100. These two stocks have been a massive force behind the Nasdaq 100’s massive ytd outperformance vs the S&P 500 (up 24.50% vs 14.5%) as these two stocks are up 30% and 25% respectively. It is worth noting that both stocks have yet to retake their prior all-time highs made earlier this year, and both stocks declined about 2.5% the day following their Q2 earnings the week of July 23rd and have traded below those levels ever since.

The implied move for AMZN tomorrow, following earnings is about $40, or about 4% in either direction which is a little rich to its average one-day post-earnings move of about 3% over the last four quarters, but well below its 8.5% one day average over the last 10 years.

The implied move for GOOGL tomorrow, following earnings is also about $40, or about 4% in either direction which is a little rich to its average one-day post-earnings move of about 2.2% over the last four quarters, but well below its 5.3% one day average over the last 10 years.

To my eyes, and ears, there is a couple very big differences between the trade and investment setup for these two stocks.

First let’s start with AMZN. From a technical perspective, the stock’s intraday reversal from an all-time high, the day of Q2 earnings on July 27th, and its subsequent follow through the next day will likely serve as staunch technical resistance for some time. Also the trading range from the start of the Summer, with the stock well below its all time highs (nearly 11% below) suggests the stock, which is up twice that of the SPX ytd may be a bit tired as investors look elsewhere for now.

From my perch the real question for investors to consider in the near term is the pace of AMZN’s spending at the expense of profitability, especially in areas like bricks and mortar retail, a segment that most investors a year ago might have assumed was NOT on their radar.

RBC’s Internet Analyst Mark Mahaney (who rates AMZN a Buy with an $1100 price target) highlighted the following things to watch for in the report in a note to clients this week: 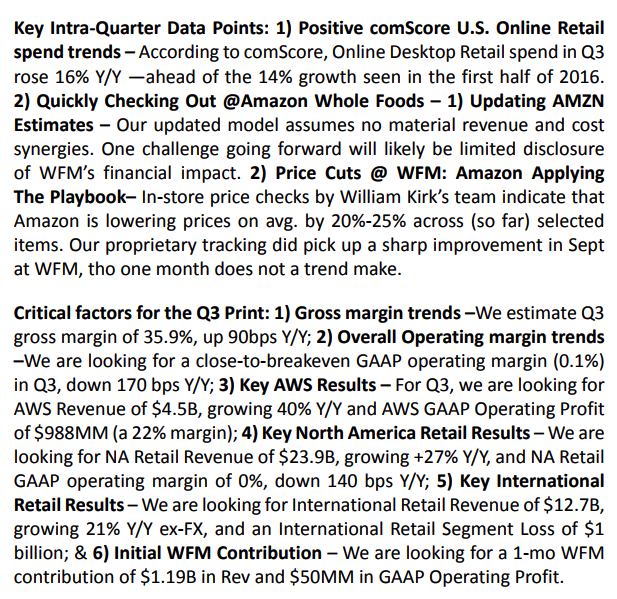 And now onto GOOGL. The technical set up is quite clear. Since their Q2 results in late July, the stock has actually shown very sound relative strength to AMZN, having just last week made a new albeit brief all-time high. The stock’s recent lows near $915 should serve as very healthy near-term technical support:

While there are few mega-cap tech stocks sporting 20% yoy sales growth off of $72 billion base like GOOGL, the gap between its expected adjusted earnings growth in 2017 and that of GAAP of more than $10 ($41.78 and $30.69 respectively) is quite large and the difference in earnings multiple is quite staggering (24x vs 30x). But I suspect investors are eyeing consensus estimates of almost $50 in eps adjusted in 2018, which would place the stock at 20x next year, which in this market is not particularly expensive.

RBC’s Internet Analyst Mark Mahaney who rates GOOGL a Buy with an $1050 price target highlighted the following things to watch for in the report in a note to clients this week: 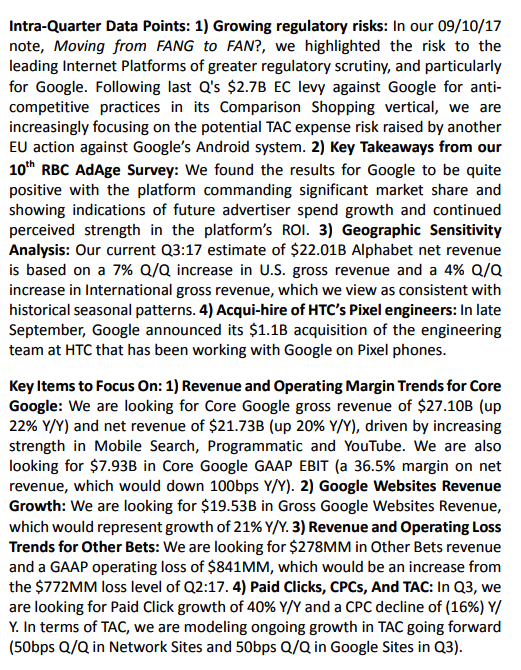 Where do I shake out? AMZN probably has the most squeeze potential to the upside given the seasonality of its retail business and its recent underperformance. GOOGL’s relative outperformance has been impressive so it would take a nasty miss and/or guide lower to see the stock back towards the summer lows near $915. i would be shocked if either massively out-performed the implied move to the downside as most investors who have enjoyed eye-popping gains ytd in both stocks would much rather pay tax on gains in 2018 once there is more clarity on what tax rates will be, (likely lower).

In both cases options are pretty cheap historically, and those with a directional bias could simply buy the atm calls or puts to define risk. For long holders in AMZN 1x2s for leverage back to the prior highs could make sense. For instance, the implied move to the upside would take the stock to about 1010. The Oct27th weekly 1010/1030 1×2 call spread is about even and that would provide leverage of up to $20 in addiitonal gains between 1010 and 1030 with a move above 1030 effectively a sale of the stock at 1050.

With GOOGL leverage is a little more difficult but long holders could look to cheap protection. For instance the Oct27th 965/925 put spread is about $6 and provides up to $34 in towards that support level mentioned earlier (915).