Despite shares of Wells Fargo (WFC) rallying 11% from its 2017 lows it early September, the stock is essentially flat on the year:

And it is still down about 8.5% from its 52-week, and all-time highs made a penny below the $60 mark on March 1st. Some technicians will view that as a massive double top (despite the apparent hold this year) and possibly the end of the long-term uptrend that has been in place from its early 2009 financial crisis lows:

Prior to the surprise result of the 2016 election, and the subsequent rally in stocks, with banks stocks in particular outperforming in Q4 of 2016, shares of WFC were down 25% from its then all-time high made in 2015 as the company was embroiled in a phony account scandal, per Dealbook from Sept 8, 2016: 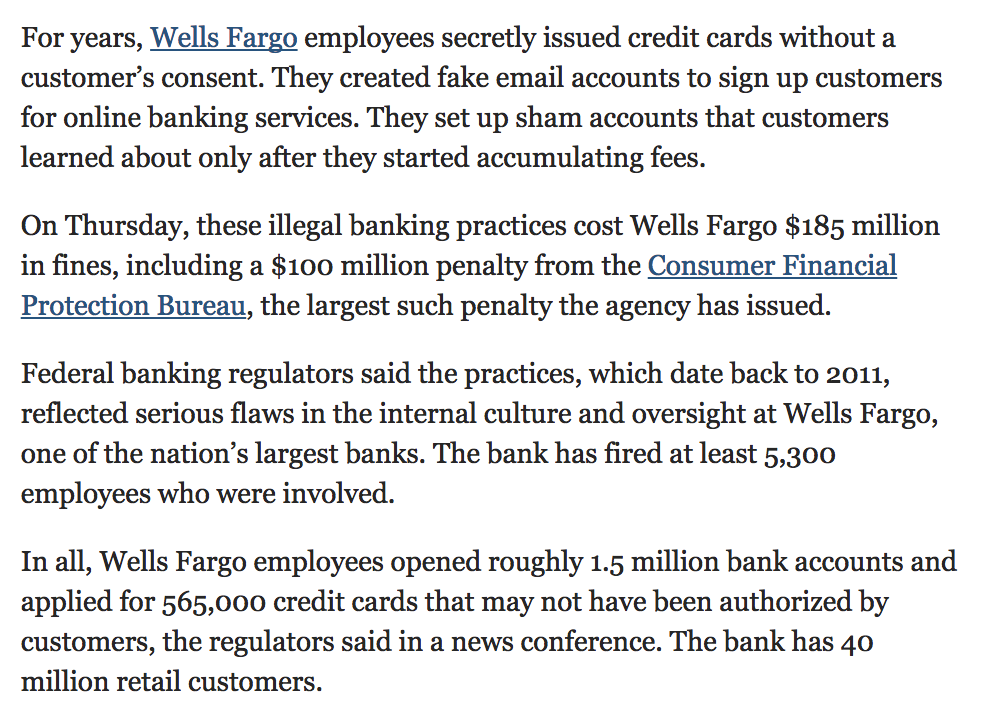 After massive fines, a purge, compensation clawbacks of the CEO and the executive in charge of the retail unit, the stock, and I guess more importantly the company and brand as “Main Street’s bank” has yet to fully recover as the further negative news has trickled out. Just this past June, in similar fashion to the prior scandal, impropriety was revealed in their mortgage unit, per the New York Times: 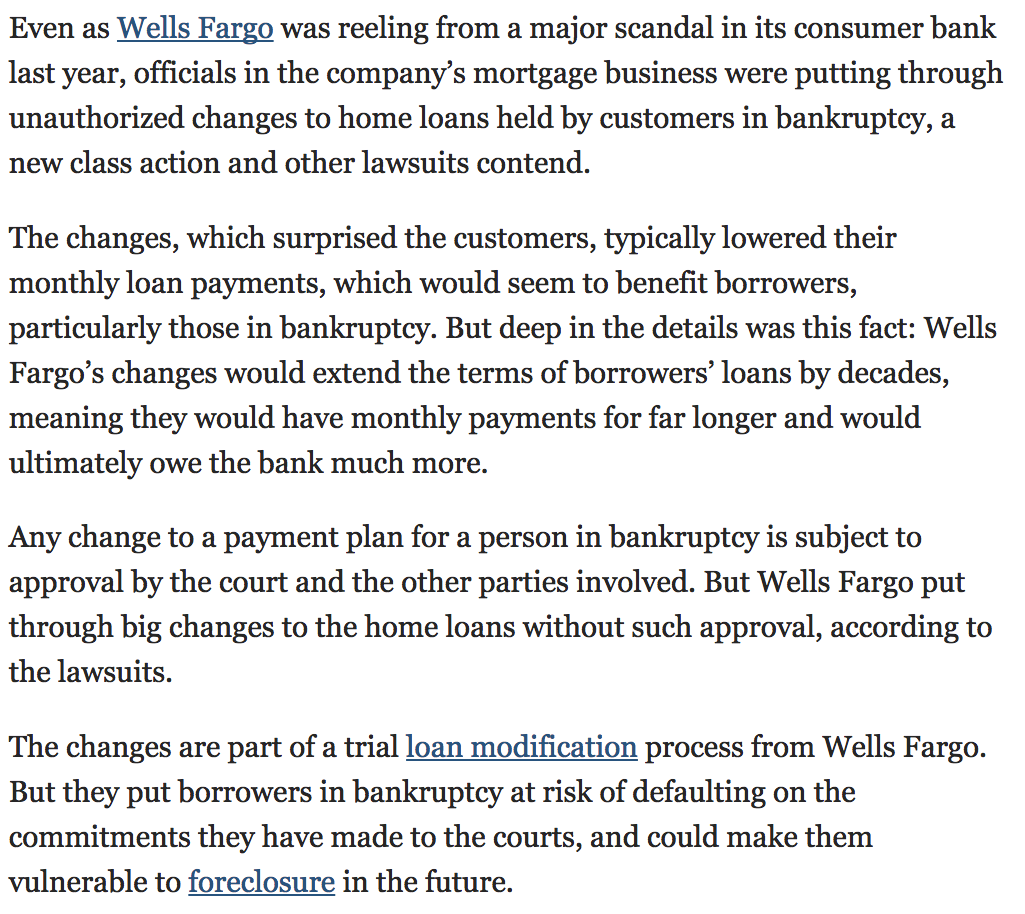 And we weren’t done yet, this past August it was revealed that Wells Fargo Review Finds 1.4 Million More Suspect Accounts, bringing to total unauthorized accounts to nearly 3.5 million!

Which brings me to last week’s reveal that financial stock guru Steve Eisman, (he was played by Steve Carrell in the movie “The Big Short” based on the book by Michael Lewis, which recounted his betting against U.S. housing prior to the financial crisis) is “betting against” shares of WFC, per an interview with CNBC:

A little more than a week ago shares of WFC sold off nearly 3% the day following its Q3 earnings that missed consensus on weaker than expected loan growth and high expense levels due to ongoing litigation and settlements from the scandals. I suspect this report only emboldened Eisman.

WFC stock has filled in its earnings gap, and for those who agree with Eisman that the banks recovery might take quarters, if not years, this could be a pretty good short entry for a retest of the uptrend near $49ish.

Despite all the noise, short-dated options prices are cheap, just off of 52-week lows with 30 day at the money implied volatility at 15%, and nearly half of it 52-week highs from December near 28%:

The next identifiable catalyst for bank stocks will really be out of their control, the Dec 13th Fed Meeting which Fed Fund futures price nearly an 85% chance of a 25 basis point rate increase, and then any wrangling in DC about debt ceiling and tax reform will be the other main macro events through year-end. And then, of course, Q4 earnings that should fall in the second week of January. If the government were to be shut down over politics surrounding DACA/Wall, and if Tax Reform fails like all other legislative priorities of the White House so far in 2017, then maybe stocks get more volatile, and that volatility causes the probability of a rate increase at the Dec 13th meeting to decrease. In this scenario fading the recent bank rally would make a lot of sense, and in particular under-performers like WFC.

Rationale: this trade idea is slightly in the money, offers profit potential down 3% with max gains down 13.5%, with profit potential of 10.5%. It captures all the macro events like FOMC and Congress, as well as the next big earnings event for the stock itself.