Its a weird day for retail stocks. Shares of Walmart (WMT) and Target (TGT) are each up more than 2% with the former making its second consecutive 52 week high (up a whopping 24% ytd) after yesterday’s gap n’ go: 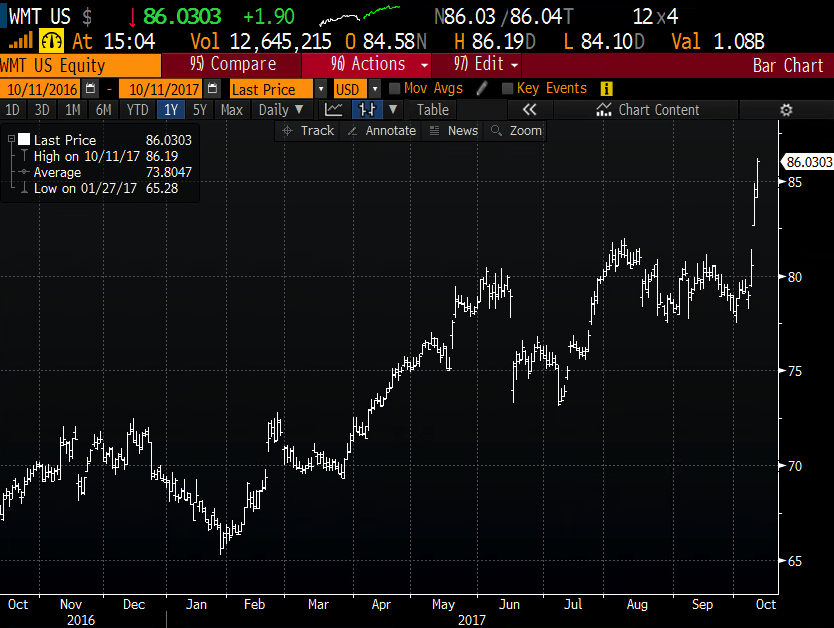 while the latter is quickly approaching a 7 month high, threatening a gap fill, despite being down 18% ytd:

2017 has certainly been a case of feast or famine for the retail sector as the S&P Retail sector etf is down 6% ytd vs the S&P 500 is up 14%. The XRT has been a bit of a project for us at RiskReversal this year, as we have looked to sell it on rallies as we view the fundamentals in the space and the technical set up in the chart equally troubling. The XRT after a healthy 10% bounce from multi-year lows in August was just rejected at $42 and likely sees a retest of the Aug lows in the coming months:

If the fundamental picture does not improve meaningfully this holiday season we expect a break of long-term support to occur confirming our long-held belief that this is the worst chart ever, a textbook head and shoulders top:

Speaking of worst charts ever, shares of Kroger (KR) which are down 40% of the year caught a short-lived bid this morning gapping up nearly 7% after the open after the company hinted it might sell-off its convenience store chain, only to spend most of the rest of the day giving back those early gains:

At least one trader used this pop to roll a large block of puts shortly after the open when the stock was $21.76, selling to close 25,000 Oct 21 puts at 15 cents and buying to open 25,000 Apr 21 puts for 1.85. These puts now break-even down at $19.15, or about 12% from the trading levels. As I write the stock is $20.95, only up 2% on the day, and those April 21 puts are now $2.15 bid, or 30 cent a contract resulting in a mark to market gain of $750,000! Your guess is as good as mine whether this trader was rolling a hedge against a long stock position or an outright bearish bet, but I don’t think it was a coincidence that the trader used the stock’s largest opening gap in a very long time to adjust positioning. That said the Oct 21 puts that the trader sold to close at 15 cents as part of the roll are also up 30 cents resulting a wash 🙁

The 6-year chart might be exhibit A why a frustrated long holder of KR might seek downside protection as there is little technical support down to $15-17 range: