In early August, after considerable weakness in the dollar, we considered the effect that a reversal and sudden strength in the dollar would have on multi-national corporations. We detailed a way to play in the consumer staples etf XLP:

These stocks trade well above a market multiple for single digit eps and sales growth and have been buoyed in 2017 because of the dollar weakness. To my eye, a bounce in the USD of even a few percent could cause a break of the uptrend that has been in place since early December and you would have a trade back to probably $53, maybe $52 in the coming months.

And here was the original trade, from August 7th:

After the short Sept puts expired worthless, and with the etf slightly lower, we turned the Dec puts into a put spread, further reducing risk. From Sept 20th when XLP was 54.35:

Breakeven/Rationale/Management – Our new breakeven is 53.45 and that is a good level to watch for trade management purposes. If the stock remains above that it may make sense to take profits at some point, if it goes below that level patience is in order as it can be worth up to $4 with the etf at or below $50.

Since then the dollar has continued its creep higher:

And XLP is hanging on, slightly lower: 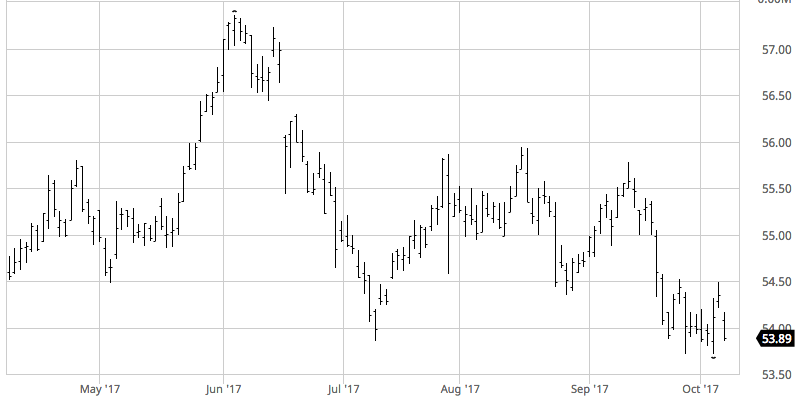 XLP’s low from a few days ago is the are to watch at this point. It’s very near the breakeven on this trade.

With XLP now 53.90 the Dec put spread is worth about .90, so almost a double from the current risk. But below that level is a bit of an airpocket and this has until Dec expiration. If we continue to simply see weak bounces patience could pay off.

So we’ll keep an eye on both the dollar (which whipped around a bit trying to digest today’s payrolls and is tracking news from Europe and DC) and XLP itself. A break below in XLP and this trade is in a good spot.