Yesterday I took a look at the Nasdaq 100 via the etf that tracks the index, the QQQ (here). The specific focus of the post was the concentration of the QQQ of its top 5 holdings Apple, Amazon, Alphabet, Facebook, and Mircosoft (about 42% of the weight), their collective eye-popping year to date gains, but their recent underperformance relative to the daily new highs in the S&P 500 (SPX) and the QQQ which is essentially at its all-time high.

The purpose of RiskReversal is to serve as an idea generator for self-directed investors and traders. We are not your money manager or broker, we don’t pretend to be market oracles or a can’t lose charlatan on financial TV or Twitter. Our niche is options, and our main goal aside from idea generation is education, specifically detailing ways how equity investors can express their market views using options to better define risk, add leverage and/or yield. Pretty simple stuff, but often times my views on markets or individual names get misconstrued as I sometimes tweet about them and am often offering one-liners on CNBC. My need for transparency about being misquoted on TV was the main reason I started RiskReversal all the way back in 2011.

Yesterday is a pretty good example of my frustration about expressing my market views so publicly, In my prior life as a proprietary trader at hedge fund, bank or on my own I would discuss market views and trades with a very small select group. The interesting thing about this, as any trader knows, is that they change their minds a lot. But changing your mind a lot on TV makes you look like a buffoon, so I generally stick to broad thesis and offer ideas on how to play maybe a consensus view that I don’t agree with or one that I am considering. After doing this for nearly 8 years I have come to the realization that viewers & readers will hear and see what they want and there is little use in trying to change their minds. And to be frank I really could give two shits about what some prop trader on Twitter thinks about my ideas and views, but I do want to be transparent.

SO back to yesterday. I write the post on the QQQ because I thought there is a pretty interesting divergence among its leaders and the broad market heading into what should be an important fundamental catalyst, earnings season.  After some facts then I say:

If you are inclined to think that positive earnings and guidance will serve as the catalyst for tech leaders to retest, or possibly make new highs, then you might want to consider financing Nov upside calls in the QQQ by selling shorted dated calls of the same strike

And offer a way to express this view with defined risk using options, for educational purposes.

Then on CNBC’s Fast Money later that afternoon we had a guest, Rich Ross a technician from Evercore make a bullish case for AAPL, the largest holding in the QQQ at about 12%, and why he thinks it gets back to its highs soon, and why that will be good for the QQQ, watch here: 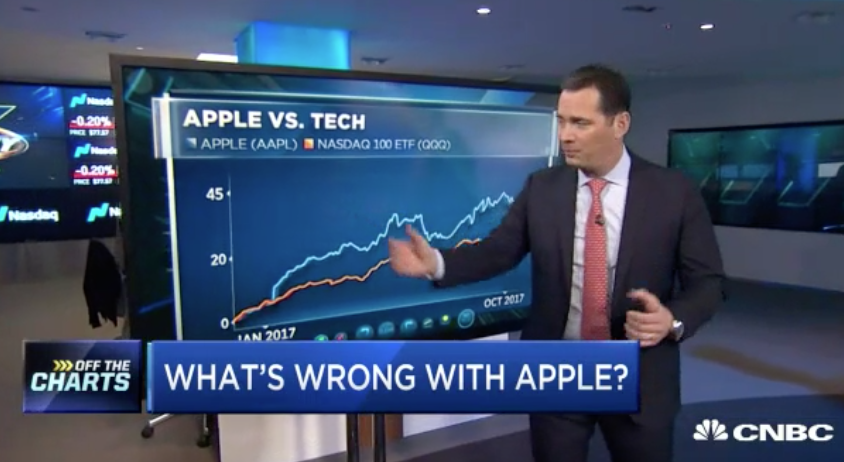 I followed up by detailing some options activity in the QQQ for our Options Action segment that suggested to me that a large holder of short-dated puts was giving up on a bearish view or closing a hedge, watch here: 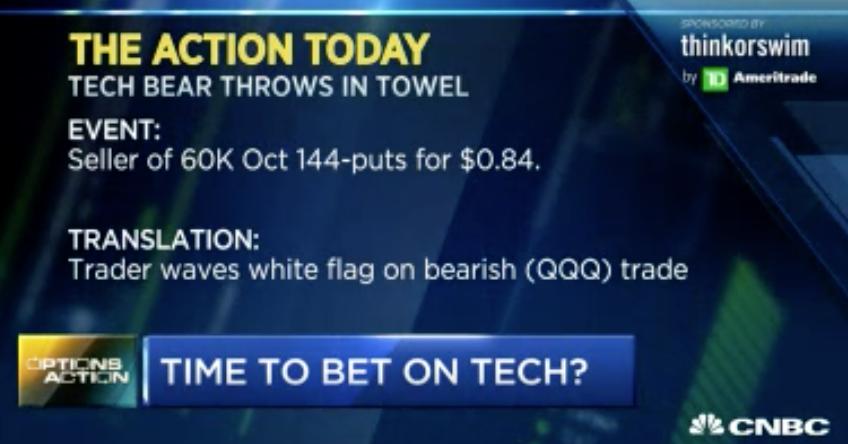 My view was that if you agree with Rich on AAPL and QQQ and agree with the bullish thesis from many of my co-panelists on AAPL specifically, then options prices in the QQQ are cheap in vol and dollar terms and a great defined risk to play for a breakout.

Soon after that segment, we had the sincere pleasure of Jim Cramer coming on the show for a quick hit and he caught my comment on the QQQs we had a little joke. The joke is that most of these guys know that I like to take a bit of a contrarian view, at least in an attempt to poke holes in what has been a fairly universally bullish (and correct) view on the markets. Which, from an options perspective, is not that weird. That’s what options are there for. 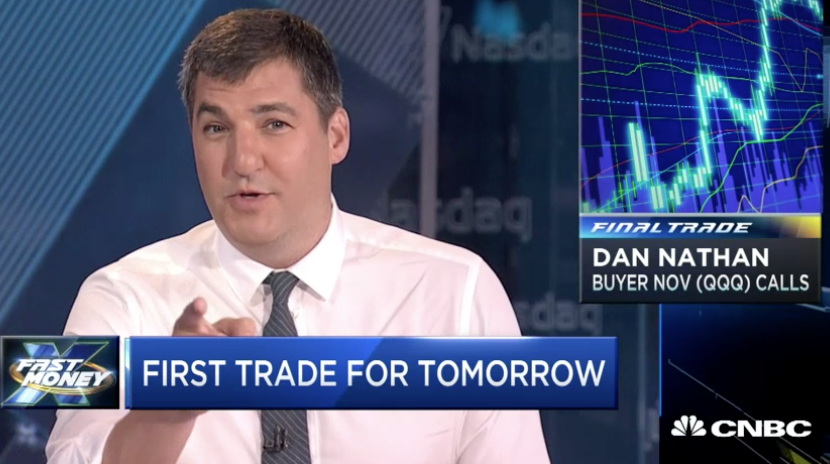 So for those at home, its about the ideas, its about learnings about different points of views and how others express those views in the markets. If you are an active market participant and you don’t get that then you might want to find a new hobby. If you get that and don’t understand what I was saying, how you could express a bullish view in mega-cap tech into Q3 earnings by defining your risk with an at the money QQQ call through November expiration you might want to shut down your twitter machine, drop the snark for 10 mins and read a little about options and how they can be an effective tool to better manage risk.

So don’t worry, your buy the dip trade is still in place, Dan Nathan did not go bullish “at the highs” but he did drop a little knowledge on you about options right now. Cheap is cheap, and this game is about batting average and capital preservation and there’s an opportunity to be there for higher highs without losing your shirt if wrong. 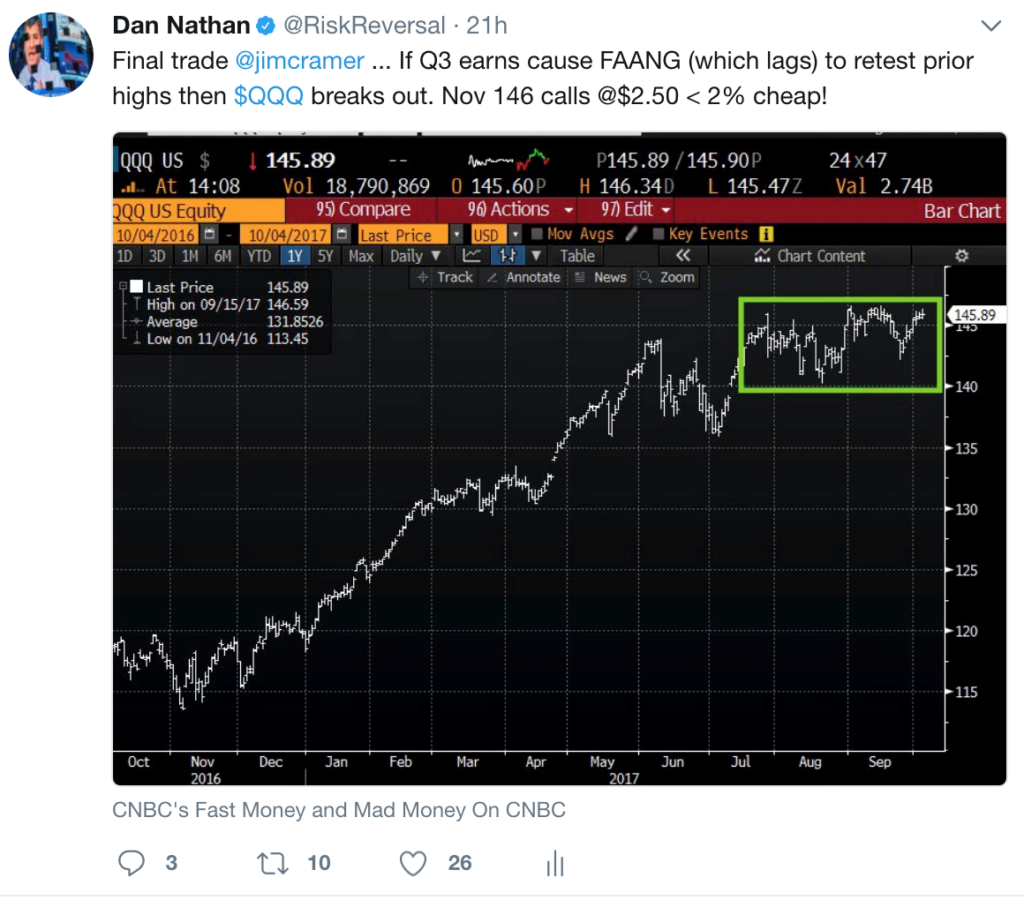