If the market closes here at 4pm, the S&P 500 (SPX) will make its 40th record close of the year, nearing a 13% year to date gain. What’s even more impressive is that some large stocks like Apple, Amazon, Facebook, Google and Netflix, all with outsized gains relative to the index this year, have all taken pause, failing to confirm the daily new highs in the broad market and allowing others to do so. Most market participants view this action as healthy, a sign that the rally is broadening out. It’s hard to disagree with that notion, especially when you see stocks like Netflix (NFLX), which is up 43% ytd, consolidate some of those gains, and now biding time till its next catalyst.

That next catalyst is Q3 earnings, which will fall on Oct 16th after the market close. The options market is currently implying about a $15.50 move in either direction between now and the close on Oct 20th, or about 8.7%, most being priced for the earnings response.

Following the company’s Q2 beat shares of NFLX rallied 13.5% the next day to a new all-time high. Although, within a month the stock has nearly filled in the entire earnings gap, having recently failed to make a new high, and now seemingly drifting back towards the low end of the 3-month range: 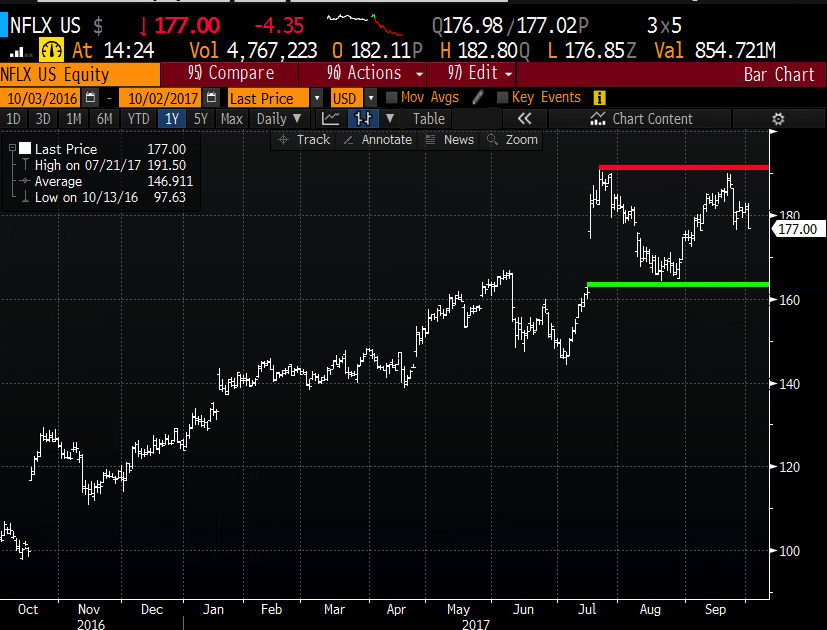 I suspect a new high will be confirmed, or a retest of the prior low post-earnings and everything in-between will merely be noise.

I think there are two ways to look at NFLX stock right now, what it will do until earnings, and what it will do after and how to play that near term consolidation from the long or short side.

If we see a continuation of the consolidation the stock would probably finding support somewhere around the August lows. Put spreads for Oct 13th expiration are dollar cheap because they do NOT catch the earnings event. For instance, with the stock at $177.70 you could buy the Oct 13th 177.50 / 167.50 put spread for $3. This put spread breaks-even down at $174.50 and offers profits of up to $7 between $174.50 and $167.50. Risking 1.7% to possibly make up to 4% with very near the money participation. That’s dollar cheap considering how the stock is moving (e.g. down $4 today alone).

Consolidation Into Earnings, Breakout After

Then there’s defined risk long for those looking for those breakout after this consolidation but also selling deltas (and protecting against decay) into the event itself.

If I were inclined to play for new highs after earnings I might consider a call calendar, assuming the stock would remain range-bound below the prior highs prior to results. I would look to sell and out of the money call in Oct 13th weekly expiration (prior to results) and buy the call of the same strike in the Oct 20th expiration that would catch the earnings event. For instance with the stock at $177.70 you could buy the Oct 13th / Oct 20th 185 call calendar for $4.50 (selling 1 oct 13th 185 call at $1 and buying 1 Oct 20th 185 call for $3.50).  If the stock is $185 or lower on Oct 13th expiration you have lessened the cost of the Oct20th 185 call by $1 and you own a call just below the prior highs for earnings which can be spread into the event, further reducing risk.