Both Sprint (S) and T-Mobile (TMUS) stocks are higher this week after word of a potential merger hit. Here’s CNBC’s David Faber on Tuesday reporting from “people close to the situation”:

T-Mobile and Sprint are in active talks about a merger, according to people close to the situation.

Both companies and their parents, Deutsche Telekom and Softbank, have been in frequent conversations about a stock-for-stock merger in which T-Mobile parent Deutsche Telekom would emerge as the majority owner.

People close to the situation stress that negotiators are still weeks away from finalizing a deal and believe the chances of reaching an agreement are not assured. The two sides have not yet set an exchange ratio for a deal, but are currently engaged in talks to hammer out a term sheet.

Reuters followed up today with “people familiar with the matter” who said an agreement is close:

T-Mobile US Inc (TMUS.O) is close to agreeing tentative terms on a deal to merge with Sprint Corp (S.N), people familiar with the matter said on Friday, a major breakthrough in efforts to merge the third and fourth largest U.S. wireless carriers.

Here’s what we wrote about the trade on Monday:

As we get closer to the approval of AT&T’s (T) $85.4 billion acquisition of media company Time Warner (TWX). If the deal is on track, it might make sense to keep one’s antennas up for any other M&A speculation in similar spaces. One way to do that is by keeping an eye on the options market to spot any unusual activity. It’s impossible to know what the initiator of a large trade knows or is simply speculating on, but it’s certainly interesting to be reminded that someone at least thinks a large move is possible. T-Mobile (TMUS) certainly fits the bill in AT&T’s space. And today, a large call purchase caught our attention.

When the stock was $61, right after the open, it looks like a trader bought 20,000 of the Oct 67.50 calls for 32 cents. That early trade bumped call volume to nearly 5x the daily average. So this clearly fits the bill of “unusual activity”.

And here’s Dan discussing it on Monday’s Fast Money: 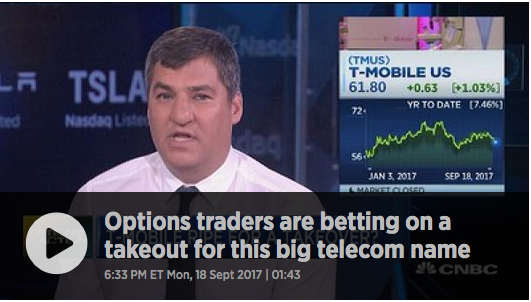 These kidn of trades are almost enough to make you a little cynical about how Wall Street works 🙂 Obviously, we have no idea who did the trade, and it’s likely they just got wind of the leak before others did, but it’s one of the interesting things to glean from big options trades. We often don’t know why someone is doing something, but in this case, in this particular name and in this particular space it wasn’t too hard to deduce, as we wrote on Monday.

So how did they do? After the news hit those calls basically quadrupled and now with the stock pulled back a bit they’re a triple. Not a bad week for that trader with potential profits of over a million dollars on that one trade.

Here’s what the stock activity looked like with the stock catching a bit of a bid off the lows near 61 on Monday (after the 20k calls traded) and then the big spike to over 65 when the news hit:

And here’s how the call itself looked, with a spike to 1.25 or so following the news: