Last night on CNBC’s Fast Money we discussed the outperformance in semiconductor stocks. These conversations usually start with a discussion of Nvidia’s relentless year to date gains and what seems like daily new all-time highs, and then finds it way to stocks like Micron (MU). I took issue to one of the panelists speaking about MU (who has been long and right, so maybe take with a grain of salt) in the same light as NVDA, as the former is in a commoditized business that is cycle driven, when the cycle turns one way or the other it is lights out for the shorts, and a, b, cya for longs on the way down. A viewer tweeted the following that I think adequately sums up my view on MU:

This is a really important point, NVDA is up 74% on the year, trades 46x the current fiscal eps that should grow 31% and 12.3x expected sales that should grow 30%. Analysts expect this growth to decelerate meaningfully in fiscal 2019 to 14% and 11% respectively, but the important part here is that this growth has come at the hands of a secular shift in computing, actually a handful of shifts that NVDA seems well positioned to continue to lead in for years.

On the other side of the chip, MU is up 62% ytd, up 30% from its August lows because their current fiscal year earnings are expected to go from a 6 cent gain in 2016 to a whopping $4.73 gain this year, with sales growing 63% yoy! So why’s does MU only trade 7.5x this year’s expected eps, and 5.5x next? Well sales growth is expected to decelerate meaningfully, despite eps growth expected of 37%.

That pretty much encapsulates the risks for a company like MU that has fixed costs… getting caught with their pants down when the tide recedes, or the cycle turns. Computer memory is a commoditized product that sells into an end market where a large part remains in a secular decline.

But don’t take my word for it, once investors got wind of the end of the prior cycle, shares of MU lost 75% of their value from their multi-year highs in late 2014 to multi-year lows in early 2016:

The stock has obviously recovered as earnings and sales recovered, but committing new capital to the stock at this stage of the game would be betting that the current sycle is not nearly done.

MU’s chart dating back to 1990 tells the same story of cyclical peaks and troughs:

This morning the stock opened up a tad on a bullish note from Deutsche Bank expecting this cycle to be different, longer… and that demand for dram and nand flash is causing an uptick in pricing: 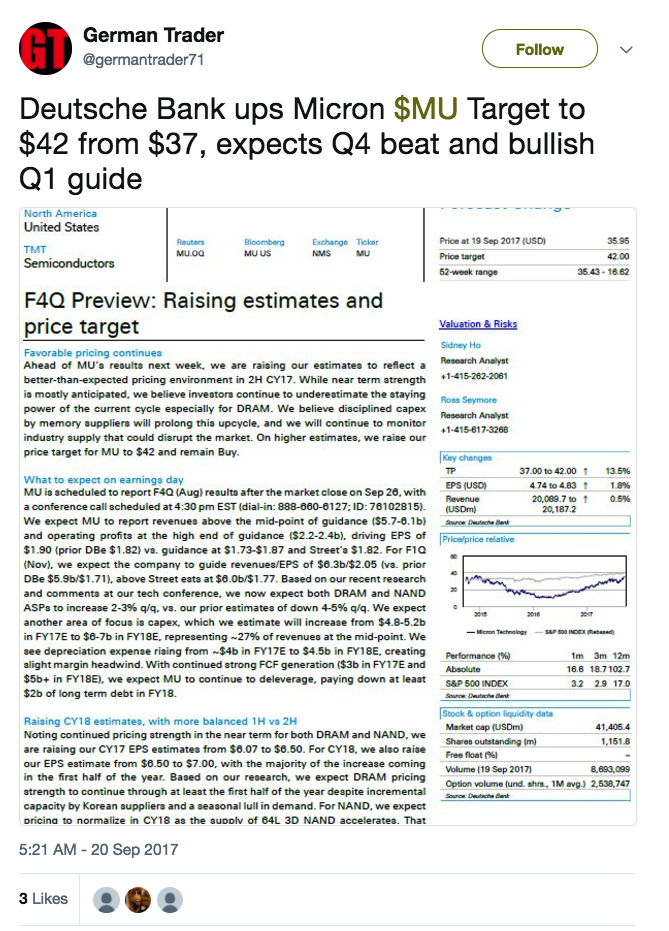 I have no idea when the current cycle ends, and i don’t know where the stock will start anticipating it, but I do know that investors are not likely to push the stock higher and expand its multiple if earnings growth does not follow suit. That is just the fact of a cyclical stock that deals in commoditized products like MU.

The next identifiable catalyst for shares of MU will be fiscal Q4 earnings on Tuesday, Sept 26th after the close. The options market is implying about an 8% move in the direction on Wednesday, which is rich to its 4 qtr and 10-year average one-day post-earnings move. To my mind anything less than a massive beat and raise and this stock is retracing a bit of the 30% move since Aug 12th, probably back to the recent breakout level near $33:

It doesn’t make a lot of sense to place bets for a negative earnings reaction 4 trading days before the event, so we will take another look Monday or Tuesday, but gun to my head this moment with the stock at $35.80 I would buy the Sept 29th weekly 35.50 / 32.50 put spread for $1, buying 1 Sept 29th weekly 35.50 put for 1.53 and selling 1 Sept 29th weekly 32.50 put at 53 cents. This trade risks 3% to possibly make 6% in one week, but has near the money participation targeting a decline in line with the implied move. Risk $1 to maybe make $2 in a week, not horrible, but not great either. We will check back early next week before earnings.