As we get closer to the approval of AT&T’s (T) $85.4 billion acquisition of media company Time Warner (TWX). If the deal is on track, it might make sense to keep one’s antennas up for any other M&A speculation in similar spaces. One way to do that is by keeping an eye on the options market to spot any unusual activity. It’s impossible to know what the initiator of a large trade knows or is simply speculating on, but it’s certainly interesting to be reminded that someone at least thinks a large move is possible. T-Mobile (TMUS) certainly fits the bill in AT&T’s space. And today, a large call purchase caught our attention.

When the stock was $61, right after the open, it looks like a trader bought 20,000 of the Oct 67.50 calls for 32 cents. That early trade bumped call volume to nearly 5x the daily average. So this clearly fits the bill of “unusual activity”.

Often we are asked how we determine whether a large trade was bought or sold. There are a couple of ways to determine, obviously if the contracts are traded on the offer, it’s likely that they were bought, and vice versa on bid. Whether they’re marked opening or closing can help, also whether they’re tied to stock. But the most reliable way (besides being told by those involved) is to take a look at what the intra-day implied volatility (the price of options) do in the name.

Here’s how it looked in TMUS  today, with a higher move in IV from Friday (that can happen as market makers reset from the weekend) but then a huge ramp right after the open taking IV even higher.  Clearly, these options were bought: 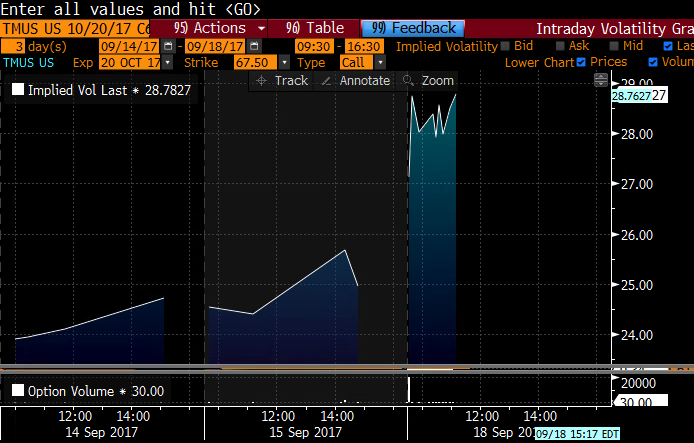 Taking a look at the TMUS chart, the trader is looking for the stock to make a move beyond its 2017 highs, possibly levering up an existing long position… and found a dollar cheap option to do it with. One reason for defined risk strategies in a stock that has had no shortage of deal rumors might be the price action and the chart. The action is poor to say the least, and the stick is approaching its July low which is technically important because that appeared to be support at the time as the stock stopped at its January breakout level. 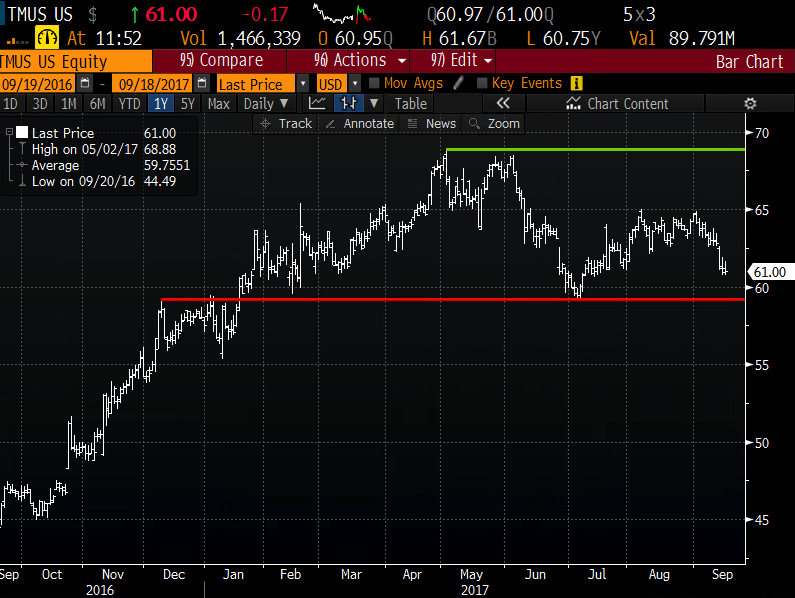