Last week on CNBC’s Fast Money I highlighted a bullish trade in the SMH, the Semiconductor etf, where a trader rolled a call position up and out. Selling to close calls that were near the money but expiring last Friday and rolling to a higher strike in November… watch here: 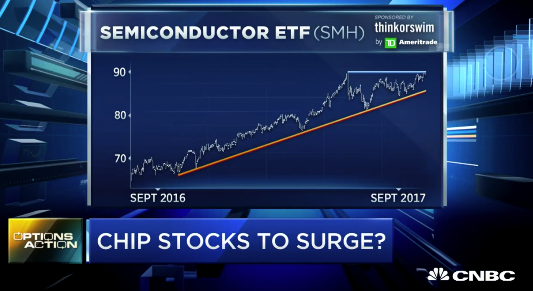 Well, this trader had the right idea last Wednesday when the SMH was below $90, the Nov 95 calls that were bought 10,000x for 60 cents when the stock was $89.70 are now worth 1.20 on a 3% three-day rally! Wow the power of leverage in full effect. The breakout is nothing short of impressive:

As you would expect, lots of semi-stocks are making new 52 week highs today, but none are up more on the day, or the year for that matter than Nvidia (NVDA), up 5.5% as I write, and up a whopping 78% on the year. And that brings me to NVDA’s ugly red-headed step-child, Advanced Micro Devices (AMD), which was one of the best-performing stocks in all of tech in 2016, but has cooled out a bit in 2017, up only 16.5%, and down nearly 20% from its 52-week highs made in July. Many of the reasons investors are buying NVDA are ingredients for the bull case in AMD, basically more uses for their graphics chips than computers and gaming consoles. While AMD is expected to put up impressive sales growth in 2017 to the tune of 18% yoy, the company has not posted an annual profit on a GAAP basis since 2011, which might be one reason for the stock’s relative under-performance this year.

The next identifiable catalyst for the stock will be their Q3 results expected the week of October expiration. The options market is implying about a 10% move over the next month between now and Oct 20th expiration, which is just above the 9% average one-day post-earnings move over the last 10 years. The implied movement seems fair considering a stock like NVDA’s whose market cap is 10x that of AMD and is up 5.5% today on just a bullish call from a brokerage firm. AMD’s 18% short interest suggests that investors remain a bit skeptical, also evidenced by the fact that NVDA trades 12.5x its expected 2017 sales vs AMD trading 2.5x its expected 2017 sales.

But I can see a quick catch trade in shares of AMD, back towards its 2017 highs just above $15. And a beat and raise on earnings would cause the breakout that many stocks in the sector are already doing:

I bought the stock this morning, I will use a $12 stop on the downside. but I wanted to quickly detail a defined risk trade I am considering into the earnings event in Oct.

Rationale: risking a little under 4% to possibly make up to 15% if the stock is back at prior 52 week highs in the next month after earnings. Oh and one more thing, that price to sales multiple and the $12.5 billion market cap could make this company a clear take-out candidate.

This is a good opportunity to discuss relative options cheapness vs absolute. 30 day at the money implied volatility (the price of options) has just bounced off of 52-week lows, looking fairly cheap, but on an absolute basis, at almost 48%, options are implying large daily moves: