It’s becoming increasingly difficult to figure out which retailers and brands are Amazon-doomed and which are Amazon-proof. There was some thought of late that hardline retailers like those in the home improvement space might be Amazon-proof, but The Home Depot’s (HD) reaction last week to solid earnings and guidance, and Lowe’s (LOW) 6% decline following its results this morning suggest this group is no longer seen as impenetrable.

Today after the close Williams-Sonoma (WSM) will report their fiscal Q2 results. The options market is implying about a 6% one day move tomorrow which is rich to the 2% it has moved on average following its last 4 quarterly results, but close to its average one day post earnings move of 5.5% over the last 10 years.

Shares of WSM are down 11.5% on the year, today making a new 52 week low, and there are few other ways to see it, but the technical set up is a mess, having just broken below 1-year support:

The only saving grace for the chart might be looking out five or so years and spying what might be long term support down near $40, which was its 2012 breakout level that started an epic run to tis all time highs in 2015 that yielded gains of nearly 120%, giving way to its current 50% decline from those levels: 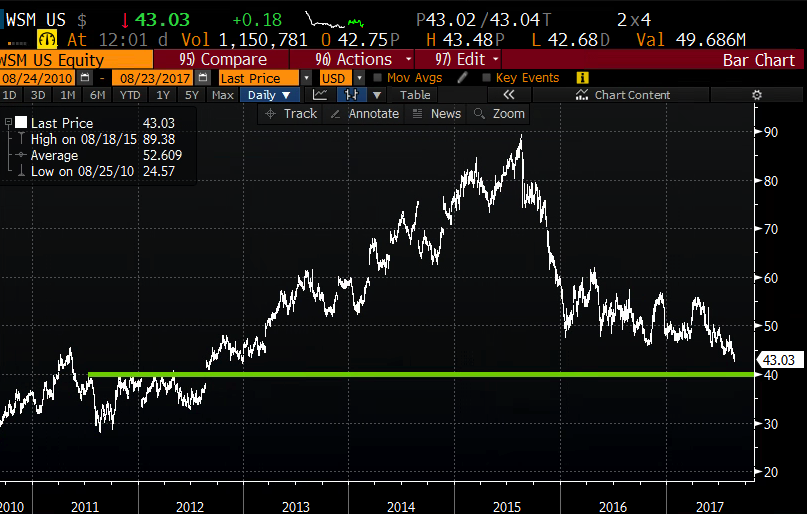 WSM is a fairly cheap stock, trading 12x expected eps growth of 3% on 3% sales growth, with a pristine balance sheet, $500 million share repurchase and pays a dividend that yields 3.6%. The sentiment is downright nasty in the stock, with short interest near 25% of the float, with only a third of the sell side analysts rating the stock a buy.

Like we said, it’s getting hard to tell who can survive the retail apocalypse but Williams Sonoma has that barbell strategy potential, especially with their status as a registry destination, which happens largely online. And again, no debt, and $5b in sales. But, it is a bricks and mortar retailer and investors have been shooting first and asking questions later. So defining risk on the long side is the name of the game. If I were inclined to play from the long side I would certainly look to do with defined risk.

Rationale – This targets a move higher, above 45 to 47.5 near term, longer term the profits can be much greater after the Sept calls expire. This is a good defined risk of playing for an earnings move higher as well as over the next few months… while defining risk into the event in case the stock sees 40 or below, as risk is capped at 1.60.