This morning’s Wall Street Journal took a look at the knock off effects of the weak U.S. dollar: Investors Chase Beneficiaries of Dollar’s Decline, citing unusually poor sentiment towards the currency, given the uncertainty of the pace of rate increases and low inflation, coupled with low commodity prices make for a powerful tailwind for corporate profits, especially for U.S. multinationals who get more than 50% of their sales from overseas and much of their expected growth. (On Friday we highlighted the potential for a reversal of the dollar’s slide and detailed a defined risk way to play between now and January expiration using the Power Shares US Dollar etf UUP, Read here: Dollar Dollar Bills Y’all.)

Earlier today, we looked at the potential for emerging market stock weakness on any bounce in the dollar. Now let’s consider how things would play out in some US multinationals.

Considering the weak dollar’s impact on corporate profits for U.S. exporters it makes sense to consider valuation. For instance, PepsiCo (PEP) which gets more than 40% of its sales from outside the U.S. sees a big benefit from its exports being more attractive, but the stock trades nearly 23x expected 2017 eps and 21x expected 2018 on expected sales growth of 6 and 8% respectively with sales only expected to grow 1 and 4% respectively. With the stock very near all time highs, up 12% year to date, mildly outperforming the S&P 500’s 11% gains, this chart is illustrative as it tracks the 1yr performance of shares of PEP vs the DXY. The inverse relationship is fairly evident:

Obviously, there are plenty of other factors at play for PEP’s ytd gains, most notably the broad market’s performance, but as FactSet highlights. the S&P 500 is not exactly cheap, despite reporting double-digit earnings growth for two consecutive quarters for the first time since Q3-Q4 2011” in the first half of this year: 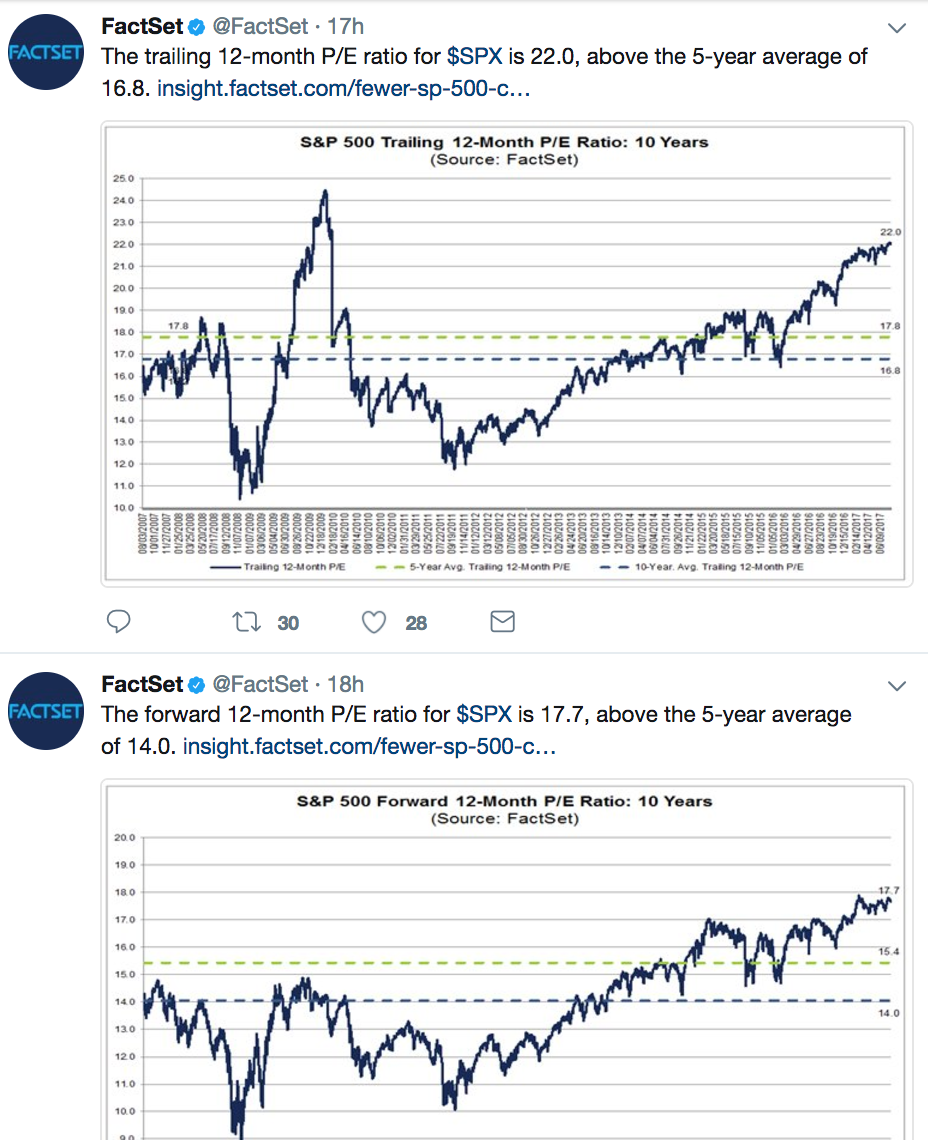 Back to U.S. consumer staples like PEP. I think it makes sense to look for a pullback in the etf that tracks the sector, the XLP, where the top six holdings make up 50% of its weight:

These stocks trade well above a market multiple for single digit eps and sales growth and have been buoyed in 2017 because of the dollar weakness. To my eye, a bounce in the USD of even a few percent could cause a break of the uptrend that has been in place since early December and you would have a trade back to probably $53, maybe $52 in the coming months:

Breakeven/Rationale – This trade does best with a move lower towards 54 before September expiration. If that’s the case the Sept puts can expire worthless and finance a cheap own of the December puts that will be there for a further breakdown. There’s optionality here if the September puts expire worthless as that short leg can be rolled, further reducing risk. The most that can be lost on the trade is .75, and it can make much more than that if things play out correctly. This structure is mildly bearish near term, with more bearishness after September expiration, which is a good way to set up to absorb the summer doldrums and be there for a pick up in volatility in the Fall.