On Friday we highlighted the potential for a reversal of the dollar’s slide and detailed a defined risk way to play between now and January expiration using the Power Shares US Dollar etf UUP, (Read here: Dollar Dollar Bills Y’all.)

Which leads me to foreign markets that are benefiting from the weak dollar, particularly heavily indebted emerging markets, per The WSJ (emphasis mine):

The opportunity in emerging markets “is as big as anything we have seen since the mid-90s,” said Lance Humphrey, who oversees $6.4 billion as a global multiasset portfolio manager at USAA, a fund manager. He has increased positions in exchange-traded funds that target value in emerging markets, which contain holdings in Brazil and Russia.

Signs that central banks plan to wind down the easy-money policies that have helped boost risky investments hurt assets in developing countries last month, when flows into emerging market funds slowed or even turned negative.

But those fund flows have picked up again recently, analysts say, in part because of the weakening dollar. A weaker U.S. currency makes it easier for these countries to pay back their dollar-denominated debt.

The iShares Emerging Market etf, EEM might seem like the obvious way to play on the weaker dollar, but its year to date outperformance of US stocks might already incorporate the 2017 move in the USD, with the EEM up more than 2x the SPX, and up 60% from its Q1 2016 lows, and possibly approaching massive technical resistance at $45ish:

The USD move lower may already be in the rally we’ve seen.

And that brings me to China in particular, where a shit-ton of USD denominated debt sits, and issuance in 2017 is about to go off of the chart, per WSJ in June: 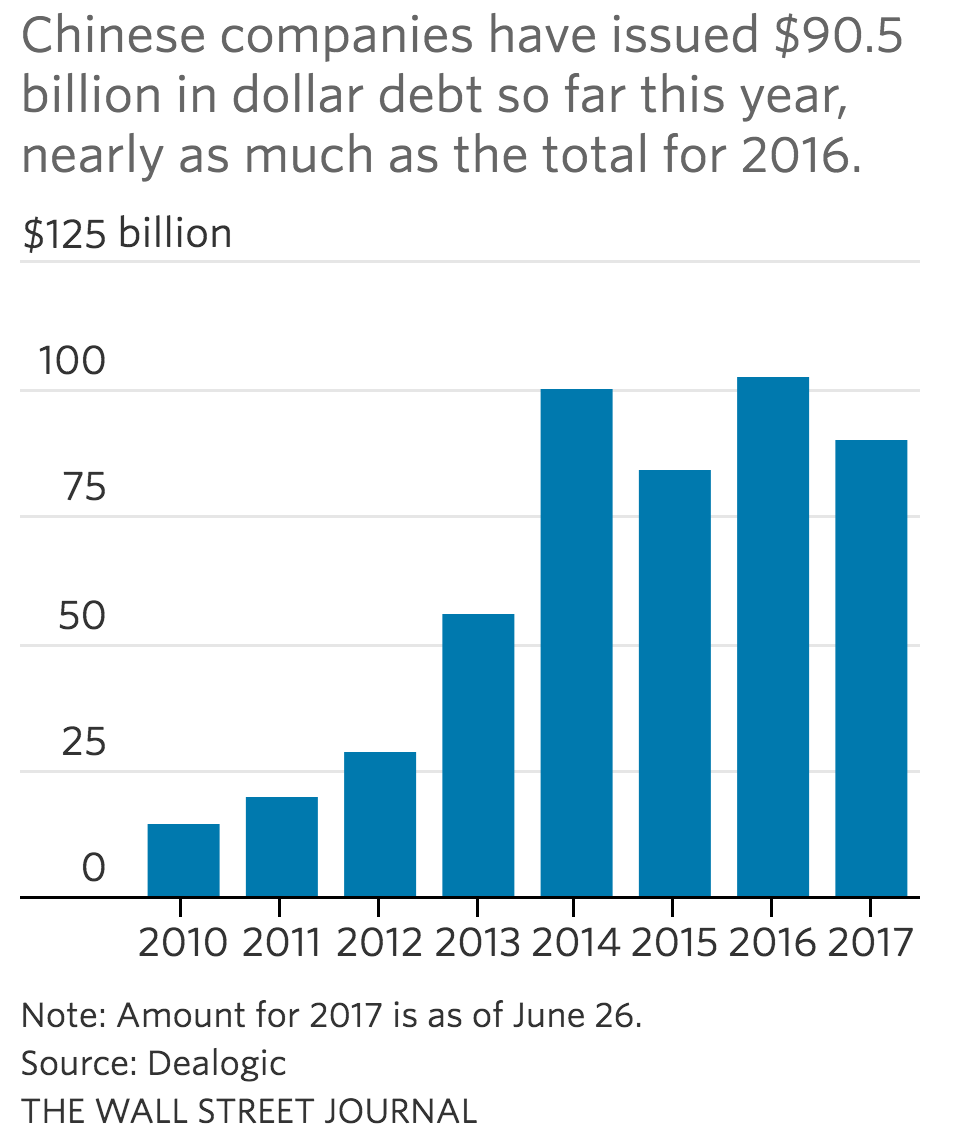 Why? Well the weak dollar and low Treasury rates:

Chinese companies have turned to offshore markets for funding in recent months as Beijing takes steps to bring down the country’s lofty debt levels. Rising yields in China’s government-bond market have made it more expensive for Chinese companies to borrow onshore, since investors generally demand even-higher yields to own corporate bonds because of the risk of default.

Falling U.S. Treasury yields have made it more attractive for Chinese companies to issue U.S. dollar debt. The yield on the 10-year Chinese government bond has risen to 3.566% on Monday in Hong Kong from 3.07% at the end of 2016, while the 10-year U.S. Treasury yield has fallen to about 2.135% from 2.43% in the same period, according to Thomson Reuters data.

So I have two takeaways here, both may be counter-intuitive in the long run but near term it might make for an interesting trade in the Shanghai Composite, which looks poised for a move one way or the other. And if the dollar were to reverse here, the next move is likely lower for Chinese stocks, with a fear of an impending credit event a possibility:

For instance, if China’s regulators are looking to crack down on USD debt at a time where they are also trying to push corporations to deleverage, and the USD was to suddenly rise, then the serving of that debt will become more expensive soon after there was an issuance binge. This might pressure Chinese stocks if companies there were to see their debt start to perform poorly as was the case with China Evergrande in late June, per WSJ:

China Evergrande last week sold bonds worth $6.6 billion in total, the largest issuance by an Asian high-yield company ever, according to Dealogic. The company issued $3.8 billion of new debt and exchanged $2.8 billion of old bonds into new debt, paying coupons of up to 8.75%. Still, the bonds fell sharply in their first few days of trading, and on Monday, just days after the issue, they were still trading below their face value, according to Thomson Reuters data. Such a price fall is unusual for newly issued bonds, market analysts say.

One way to play for a dollar bounce and a reversal in foreign stocks would be a short trade in the EEM where a disproportionate amount of the holdings are now Chinese, Hong Kong based:

Rationale – This trade caps risk at .95 in case EEM breaks out above resistance (45) and targets a realistic move lower with a 4 to 1 potential payout. It’s heavily weighted in China but incorporates other markets that could easily take a breather if the dollar were to find a bottom.