Tesla (TSLA) is scheduled to report their Q2 earnings results tonight after the close. The options market is implying about $20 (or 6.5%) move in either direction tomorrow, which is rich to the 3.75% one day post earnings average over the last four quarters, and well shy of the 10% average since the company’s public debut back in 2010.

Shares of TSLA are up nearly 50% year to date, but down about 13% from last month’s all time highs, and depending on how you connect the dots, breaking key near term technical support, its uptrend from its 52-week lows made in mid-November: 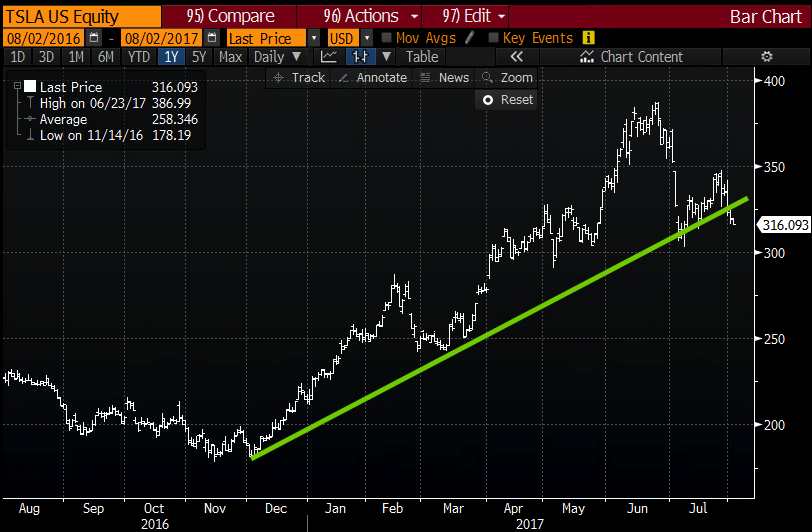 Taking a view since the company’s 2010 IPO, the stock has decent support between $300 and $250, which was the high-end of the multi-year consolidation before this year’s breakout: 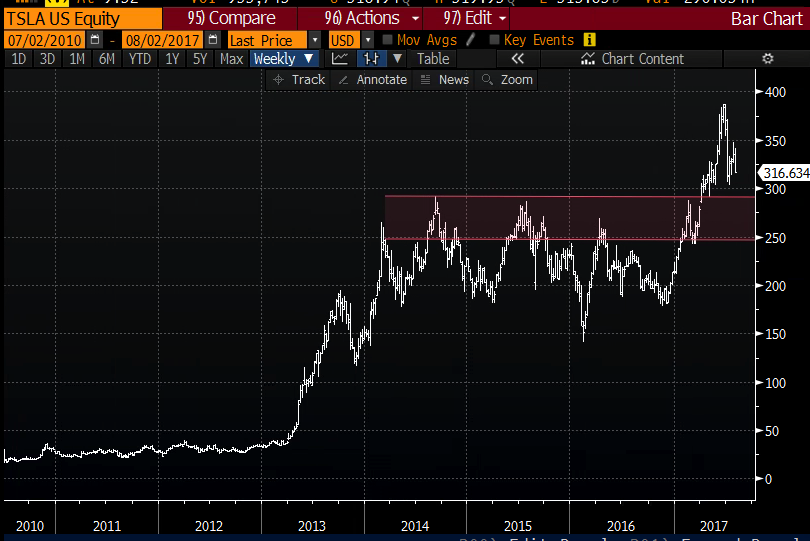 The stock’s recent weakness is partially a bit of a hangover from the lead up to the deliveries of the company’s first mass market electric vehicle, but also a disappointing update on Q2 deliveries leaving investors to question the company’s ability to manage the production of three vehicles at once, especially when you consider that the company has for years infamously come up short with most delivery targets relative to their prior guidance. I am not sure there is much else aside from margins and delivery guidance to be revealed tonight, which I suspect is likely to be disappointing in the near term as the battery shortages that the company blamed for the shortfall in Q2 deliveries has not likely changed much in the last three weeks, especially when you consider the tremendous backlog of Model 3’s the company has to make.

Back in early June when the stock was near its highs we detailed a diagonal put spread strategy to position to own Aug puts for tonight’s event,

Here was the trade idea, from June 7th:

The next identifiable catalyst for the stock will be Q2 earnings which should fall in the last week of July or the first week in August. Longs might consider short-term protection targeting its post Q1 earnings gap back towards $300, which might also prove to be a reasonable near-term correction target for those looking to play for a correction.

Once the stock started to breakdown, and the short put expired worthless, we detailed how to manage the trade, from July 5th:

The June 30th 325 puts expired worthless and the stock is lower than the initial entry. With the stock $336 this trade (now just the Aug 350 puts) is worth about 30.50, for a 10.50 gain. For trade management purposes it now makes sense to re-establish the spread and reduce overall premium at risk. The 350 puts in August capture earnings (the first week of August). Next levels of support are $325 and then $300. Targeting a move to $300 while reducing risk makes sense here:

That sale turned out to be a good one as the August 300 puts are worth about what they were sold at, even with the stock much lower. But once again, it makes sense to consider the risk reward of this trade prior to tonight’s event as it could be quite binary. With the stock near $312, the Aug 350 / 300 put spread is worth about $31. It can only be worth $50, so at this point with the stock much closer to the short put strike and max gain at $300 or lower, to stay long this spread you are risking $31 to possibly make another $19. This is not an ideal risk reward scenario, and if long this spread I might consider closing and taking a portion of the gains and roll down and out.

There are two ways to do this, one is taking almost all the profits off the table, continuing to target 300 near term, with a chance to catch a breakdown below later:

New Position: long the Aug/Sept 300 put calendar for a $14 credit

Rationale – This roll books profits ($14) and leaves a put calendar on targeting 300 for the event and the few weeks remaining in August. It then allows for more downside into September. The ideal situation is a move to 300, where the Aug puts expire worthless then a continued roll to September, creating a vertical put spread for a breakdown below 300. This roll is particularly good for those happy with the profits so far that want to stay in the game but don’t want to risk the majority of their profits. It can lose on a big move higher or lower on the event, but it is only risking the portion of the profits not taken on the roll. (about $5)

Another roll for those looking for continued weakness is to close the entire August trade and use the proceeds for a put fly out in November:

use the proceeds to:

Rationale – This also books profits and uses proceeds to look out to November for a move to 250.