Under Armour (UAA) will report their Q2 results tomorrow before the open. The options market is implying about a 12% one day move tomorrow, which is a tad shy of the average one day post earnings move of the last four quarters of 13.5%, but above its long term average of about 8.5%. WIth the stock at $20.55, the weekly 20.50 straddle (the call premium + the put premium) is offered at $2.60, if you bought that, and thus the implied earnings move (most priced for the post event response) you would need a rally above $23.10 or a decline below $17.90 to make money by Friday’s close.

Wall Street analyst sentiment towards the stock is downright hateful with only 8 buy Ratings, 21 Holds and 7 Sells with an average 12-month price target of $20.25 (below where it is trading). Despite the stock’s 30% year to date decline, and 44% decline from its 52 week high made last summer, it appears in the most recent filings that the stock’s four largest holders, who own a combined 30% of the shares outstanding have all added to their positions:

This might be of particular importance when you consider that the stock has a similar percentage sold short. If the largest holders are not likely to sell, and hold a considerable amount of shares, then shorts could trip over each other to cover on the slightest bit of good news.

Also, the consolidation since the April earnings gap might be viewed as fairly constructive, with support down about 10% around $18.50, but with little support till the mid teens. There is considerable potential for a short squeeze back to the recent highs up about 15% on the slightest bit of good news, followed by the potential for a gap fill to the high $20s on any evidence of sustained turnaround or some sort of corporate action: 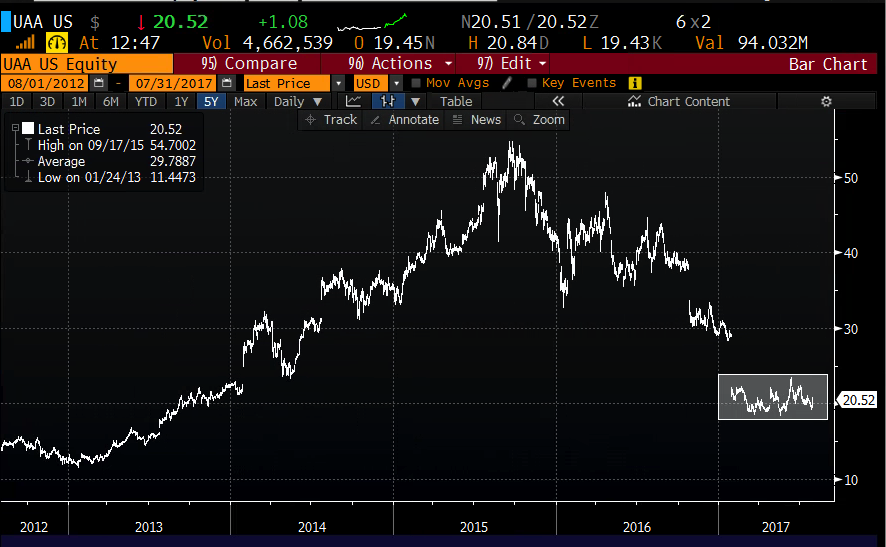 While the company is expected to break $5 billion in annual sales this year, doubling from its 2013 total, it’s the deceleration in sales growth that has investors spooked, from 22% last year to an expected 11% this year:

Any signs of stabilization in sales declines might signal to greener pastures following a heck of a month for its two biggest endorsements, Stephan Curry whose Golden State Warriors won the NBA finals last month, with Jordan Spieth winning the U.S. Open.

So What’s the Trade? If I were inclined to play from the long side, I would consider defined risk strategies that target the April gap:

Rationale – This trade idea limits risk to half of the implied earnings move, offering more than 6 weeks for near the money participation.