Amazon (AMZN) will report Q2 results tonight after the close. The options market is implying about a 4.25% one day move tomorrow which is shy of the 4 quarter average post earnings one day move of 2.25%. The weekly (tomo expiration) at the money straddle (the call premium + the put premium) is offered at $47, so if you bought that, and thus the implied move for earnings, you would need a rally above $1127, or a decline below $1033 to make money (with stock $1080).

Shares of AMZN are up a whopping 44% year to date, and up nearly 52% from its post-election lows in November when Investors’ briefly sold the stock on fears that President Trump might follow through with anti-trust rhetoric from the campaign trail directed towards Amazon and specifically CEO Jeff Bezos who personally owns the Washington Post, which was and has remained highly critical of him and his administration.

That has renewed focus with tweets this week. This morning, TheStreet.com’s Leon Lazaroff had some thoughts on Trump’s most recent tweets targeting AMZN and Bezos and the difficulty of antitrust action: 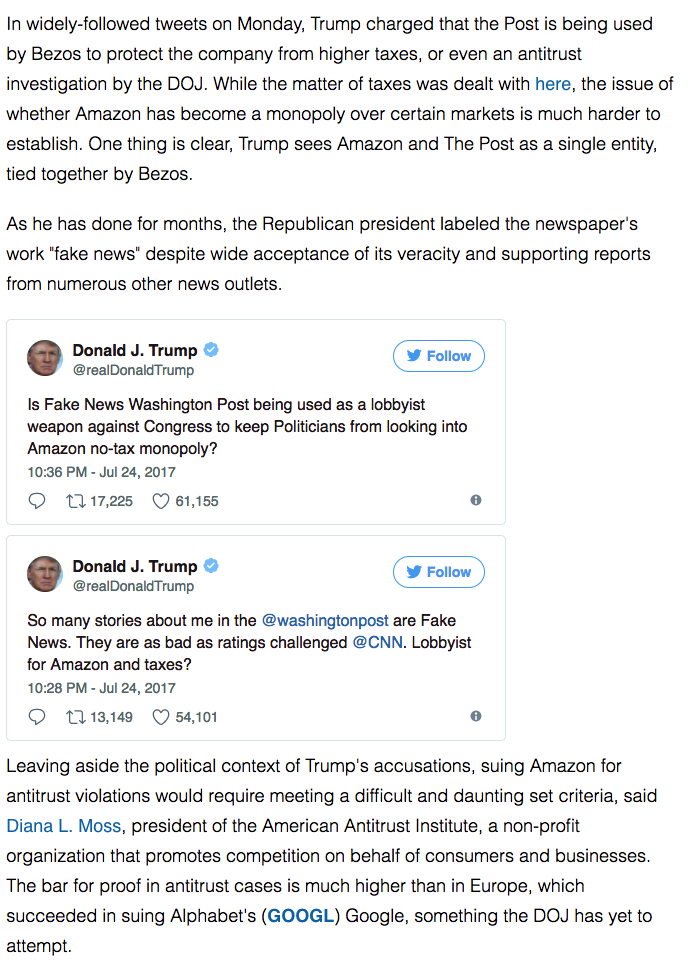 I suspect this is not an issue for the here and now, but investors will surely want to keep a listen for stepped up rhetoric on this front.

What to expect? Let’s look no further than RBC’s Mark Mahaney’s (who rates the stock a buy with an $1100 price target) Key Intra-Quarter Data-points, and his 5 critical factors for their Q1 print: 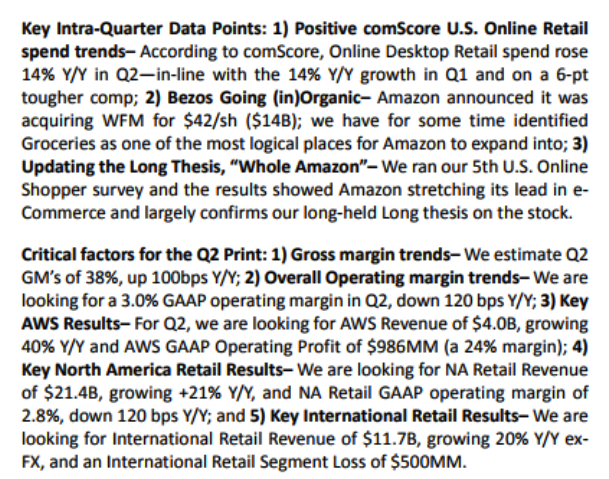 And here is Mark’s Investment Summary:

From a technical standpoint, there is no overhead resistance, with near term support at the breakout level last week just above $1000, with very healthy support back towards the uptrend from its 52-week lows in November between $1000 and $950: 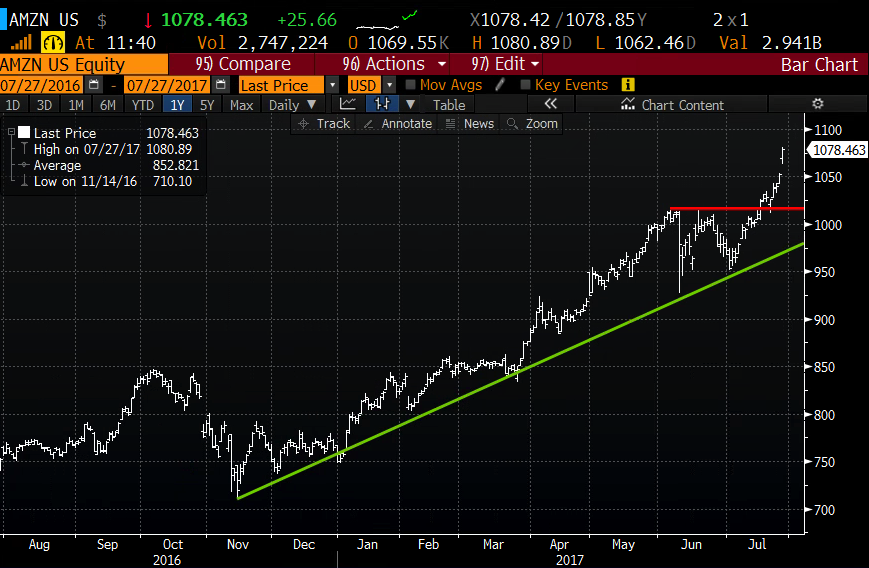 My view: it will take a material beat and raise for the stock to outperform the implied move to the upside. But that could also have been said (I did say it) about Facebook yesterday, which is up 5% following its results last night. Sentiment for this select group of mega-cap tech stocks is off the chart. It is nearly impossible to find a bear on any of these stocks. Of the 44 Wall Street analysts who cover AMZN, 38 have to Buy ratings, 5 Holds, and only 1 Sell!

Frankly, I have not been too useful to readers in stocks like AMZN and FB in 2017 from a sentiment standpoint. I have echoed caution for buying all time highs prior to every event. But buying every dip has been the right move. For the stock to outperform the implied move to the downside it will probably take something more than a soft guide as investors have come to discount such warnings over the last couple years and it will likely take some un-welcomed news on the regulatory front (which I would not expect tonight) to spook investors in any way.

Similar to what we detailed in Facebook, stock alternatives that define risk while participating in a continued move higher make sense. We’ll also detail a hedge for current longs to protect against a move towards 1000. First, the stock alternative:

Rationale – Defining risk to just $13 vs an implied move of around $50. This targets that implied move to the upside. It could be worthless if the stock goes lower on the event but on the upside provides a wide range of potential profitability for a fraction of the cost of the stock itself.

Rationale – This targets the big round number of 1000 on the downside where buyers would likely emerge on significant weakness. It risks just 9.50 and would be worthless if the stock is above 1050 on tomorrow’s close. As a hedge the worst possible scenario is a move to but not below 1050 as the hedge will be worthless and the stock will have losses.