Wynn Resorts (WYNN) will report their Q2 results. The options market is implying about 6% one day move tomorrow, which is shy of its average move over the last four quarters of about 7.5%, but in line with its 10-year average.

Shares of WYNN are up a whopping 60% on the year, within 1% its 52-week highs made late last month. Since breaking out in late March to a then new 52 week high, the stock has made a series of consolidations, all to yield higher highs: 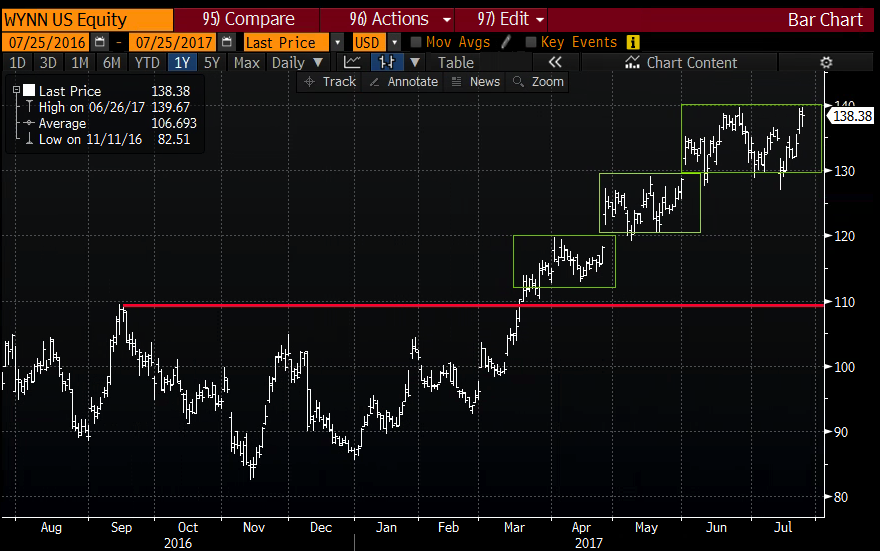 Taking a 5-year view though, the stock might face some technical resistance about 5 to 10% higher, it’s breakdown level from earlier 2015 that saw the stock decline 80% from its 2014 all time highs: 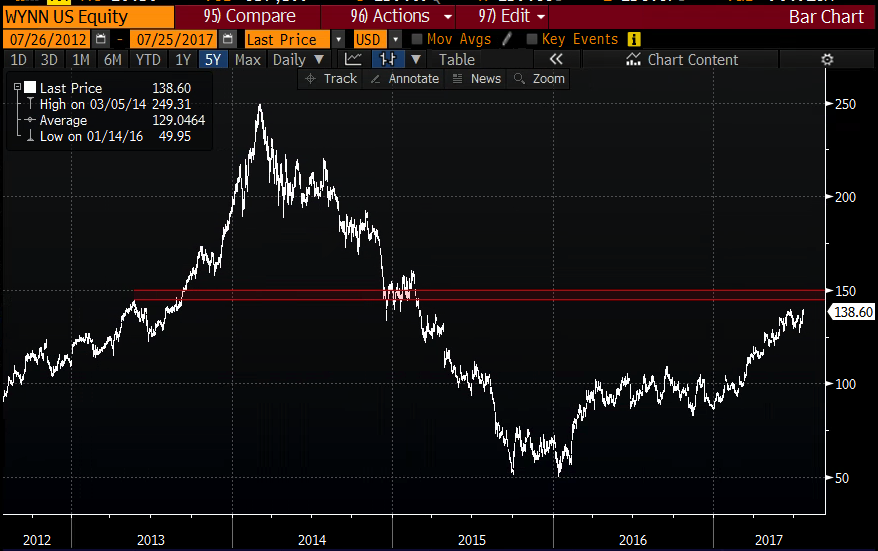 Despite the stock’s ytd performance, Wall Street analysts are fairly mixed on the stock with 9 Buy and 11 Holds ratings, while short interest has declined in the last year from over 10% of the float to about 6% currently.

Heading into the print, short dated options prices are elevated as one might expect, with 30 day at the money implied volatility near 34% (blue line below), but down considerably from month ago levels, while realized volatility (white line below, how much the stock has been moving) at three month lows around 25% suggesting that long premium strategies into the event might prove to be expensive:

Back in mid-May, WYNN CEO Steve Wynn appeared on CNBC’s Fast Money, and at the time I remember listening to his commentary thinking just how bullish he was on his company’s near term outlook (both in the U.S. and Macau) having just reported his Q1 results, watch here: 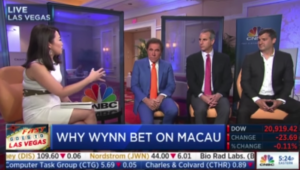 A couple weeks ago, Barron’s offered a near term sober view for stock’s levered to Macau after 6 months of very strong stock performance, speaking of the Hong Kong listed shares, but here were a few excerpts – Time to Cash In Your Chips in Macau:

That hot streak now looks to be cooling off. One warning sign is in casinos’ operating data for June: Revenue surged by more than 25% year over year, but that was less than analysts expected. More importantly, investors should take note of regulators’ tightening hold on the gaming industry.

The revival in Macau’s VIP market also coincides with the rise of a new trend in gamblers upping the ante. Researchers at broker Daiwa estimate about 20% of bets are now placed long-distance via WeChat, a messaging service in mainland China, with people who wander the gaming floors and then execute the instructions. This kind of betting has grown more popular in the last year among gamblers who either can’t get to Macau, or who don’t want to be seen there. Local police understandably aren’t keen on long-distance betting by unknown parties, and have recently begun arresting proxy bettors. The clampdown could soon affect casinos’ top lines.

REGULATORS ARE RESORTING to other means to keep shady cash out of casinos. Two months ago the Macau government announced cash machines would start using facial-recognition technology to verify cardholders. That follows increasing reports of gamblers using bank cards in other people’s names to evade daily withdrawal limits at the cash machines. Meanwhile, China has said in the past few weeks that all overseas transactions—that includes Macau—of 1,000 yuan ($147) or more will be closely watched. Gambling has clearly again become a touchy subject for China’s Communist Party.

Analysts at Nomura argue that investors have read too much into recent strength in Macau’s VIP market, which refers to high rollers who play baccarat in exclusive surroundings. They point out that much of this resurgence has occurred at one casino, Wynn Macau, and hasn’t benefited the whole industry. China’s economy also bears watching. Casino wagers by high-end gamblers tend to follow the fortunes of both the economy and China’s property market. Both looked buoyant earlier in the year, but many investors believe they’ve peaked.

From where I sit, the stock appears to be at a tough set up. If I were long I would not be too worried about one soft quarter or guide, but clearly receptive to the fact that a 10% downdraft might be the immediate response. Zero cost collars for the next few weeks might make sense to participate in a limited amount of upside in exchange for protection below a certain point.

Rationale – This costs a little more than 1% of the underlying and protects against a breakdown below the implied earnings move. It can save up to 8.50 in losses if the stock is below the hedge breakeven of 131.50.

Or for those who think a beat and raise causes a massive squeeze, back above $150,, bulls should consider defined risk strategies that play for that move while limiting risk if wrong.

Rationale/Breakeven – The short put spread risks 1.70 to make 1.30 if the stock is above 138 on Friday’s expiration. That risk/reward helps finance the purchase of the Aug 138/148 call spread. The entire trade costs 2.20. Risk total is 3.90 if the stock were to go down substantially on the event. However, the 3.90 at risk is much less than the expected move. And if the stock is 138 or higher on Friday’s expiration, the risk drops to just 2.20, with the chance to make up to 7.80 if the stock is at or above 148 on August expiration. There are a number of ways to win on this trade as it buys time out until August. The major risk to the trade is a sharp move lower on the event, but again that is defined to less than the expected move.