McDonald’s (MCD) is scheduled to report their Q2 earnings this coming Tuesday, July 25 prior to the open. The options market is implying about a 3% move in either direction, which is shy of the average one day post earnings move of about 3.4% over the last four quarters, but above its 10 year average of about 2%.

Shares of MCD have dramatically outperformed the broad market in 2017, up 26% ytd vs the S&P 500 (SPX) up about 10%, trading within a couple percent of its recent all time highs. To look at the five-year chart of the stock one would think the company developed a cure for diabetes or obesity as opposed to primarily selling products that cause both 🙂 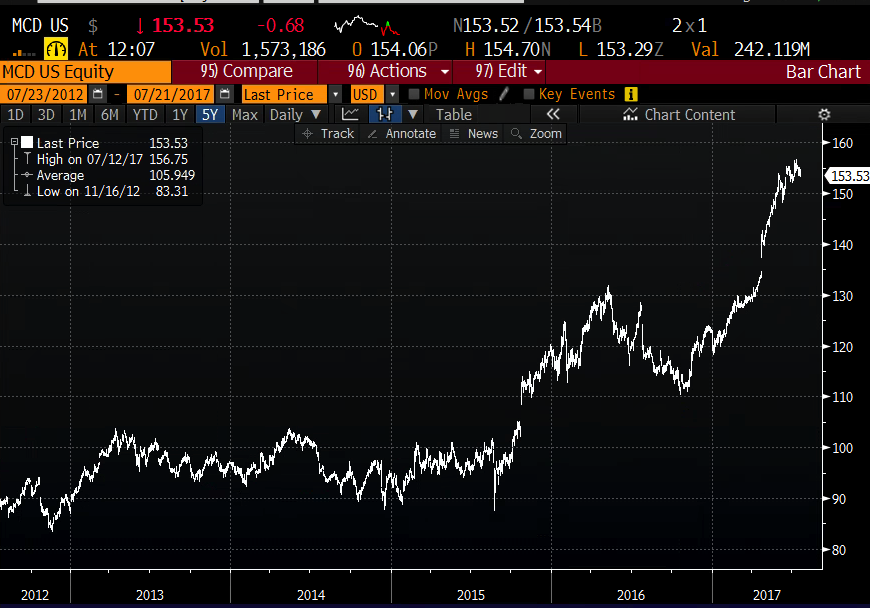 The company has put up a string of impressive beats over the last year, as they have simplified their menu, added all day breakfast, all with an increased focus on value, which in Q1 resulted in same store sales beats both in the US and internationally. Investors also are optimistic about technology initiatives like their redesigned Experience of the Future store format with kiosk ordering in 2500 stores, table service and also delivery options. Kiosk ordering comes as wages for low-end workers are increasing in some areas of the U.S. to $15 an hour, placing pressures on profitability.

It’s my view that with the stock very near all time highs and a valuation near decades highs, while sales decline (and declines are expected to accelerate as the company makes some fairly important transitions due to fierce competition) the stock could be poised for a near term retracement of a portion of this year’s gains.

If you are inclined to play for a post earnings sell-off in line with the implied move, short-dated put spreads look attractive. So what’s the trade?

Rationale – I’ll offer our normal Disclaimer for long premium directional trades into events, you need to get a lot of things right to just break-even, the direction the magnitude of the move and timing. A lot has to go right on this trade, but if it does it’s a nice risk reward on a quick move lower.