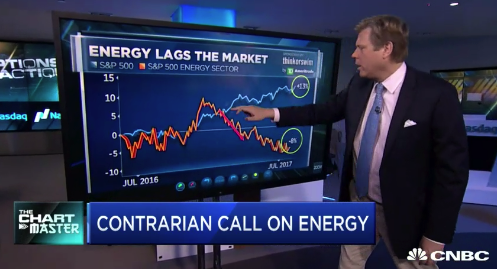 I am not a technician, but to my eye, this very well defined downtrend is like Carter says about to break out, or it has possibly merely retraced back to the upper band of the channel and like to make a new low as it continues its yoyo price action:

I guess what I find most interesting is energy stock’s correlation to the U.S. dollar index (DXY) over the past year:

For the most part, market participants recognize the inverse correlation between crude oil and the price of the USD, but since oil bottomed in early 2016, and the Fed started to raise rates, both crude and the USD started to raise together into and out of the election. As the so called pro-growth agenda of the president has floundered, both the dollar and crude have round tripped their gains since the election, and then some. Until the recent divergence as Crude as started to bounce a bit, but the USD approaches 52-week lows:

Looking at the 10-year chart of the USD vs Crude it becomes apparent that Crude’s collapse from mid-2014 to early 2016 coincided with a massive rally in the USD that was the result of the end of QE in late 2014 and the end of ZIRP in late 2015:

So there are two important questions worth attempting to answer, if you get the dollar move right, do you also get crude right, and then do energy stocks follow suit? The XLE has tracked the price of Crude fairly consistently over the last five years, with both down about 15% from their 2017 highs:

So Crude is starting to act inversely to the USD, is the XLE about to Bounce? Carter thinks so. Obviously, the Fed remains an important input to this equation. Fed Fund Futures price the prospects of one more rate hike this year (making its third in 2017) at 40% in December. If this were to trend lower because of weaker than expected growth and the failure of the president’s pro-growth agenda, the USD is likely to continue lower, and thus one might expect Crude and then energy stocks likely to go higher (if not overwhelmed by lower growth expectations, let’s not forget the synchronized global recovery that is supposedly taking place).

For those looking to make contrarian directional bets, long premium strategies look attractive, with 30 day at the money implied volatility (blue below, the price of options) at just below 16%, actually below 30 day realized volatility (white line below, how much the underlying has moved), making options look cheap:

Mike and Carter laid out a Sept 65 / 70 call spread on Friday’s show to define risk in a hope of participating in a possible near term breakout above the downtrend: 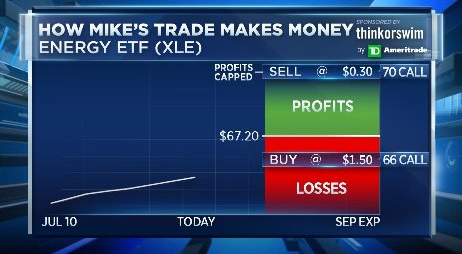 I am a bit more skeptical though, definitely near term, and I might look to do a call calendar, selling an out of the money shorter dated call and buying a longer dated out of the money call. Risking less, but buying some more time and allowing for a couple of ways to win with timing:

Breakeven on Aug expiration – The ideal scenario is that the etf ticks up towards 68 between now and Aug expiration. The short Aug call will help offset decay of the long Dec calls, but expiring worthless at 68 or lower. The Dec call should appreciate as it gets closer to 68 picking up deltas.

Rationale –  This is about the same cost as Mike and Carter’s trade, but it allows for a slightly different stock scenario. It plays for a breakout near term, but a mild one to 68, while setting up for a larger move higher into year end. It can be profitable on an initial breakout in a similar way to the call spread in Sept, but then allows to reduce total risk into year end by further spreading the Dec call after Aug expiration. If the XLE were to fail again here, it would have slightly less losses as the Aug 17 calls would become worthless.