Microsoft (MSFT) will report their fiscal Q4 results on Thursday after the close. The options market is implying about a $2.80 move between now and next Friday’s close or about 3.8% in either direction, most being priced in for earnings. The stock on average has moved about 4% the day following the last four reports and has moved about 4.25% on average over the last decade following earnings.

Shares of MSFT are tracking the performance of the Nasdaq Composite year to date, up about 17.5%, and just today making a new all time high as I write, but has recently rallied 7% since the start of the month, which might discount any good news resulting from earnings or guidance.

The one year chart below shows the stock’s recent bounce off of the uptrend that has been in place from its 52-week lows made last July and the possibility that the June high might serve as technical resistance: 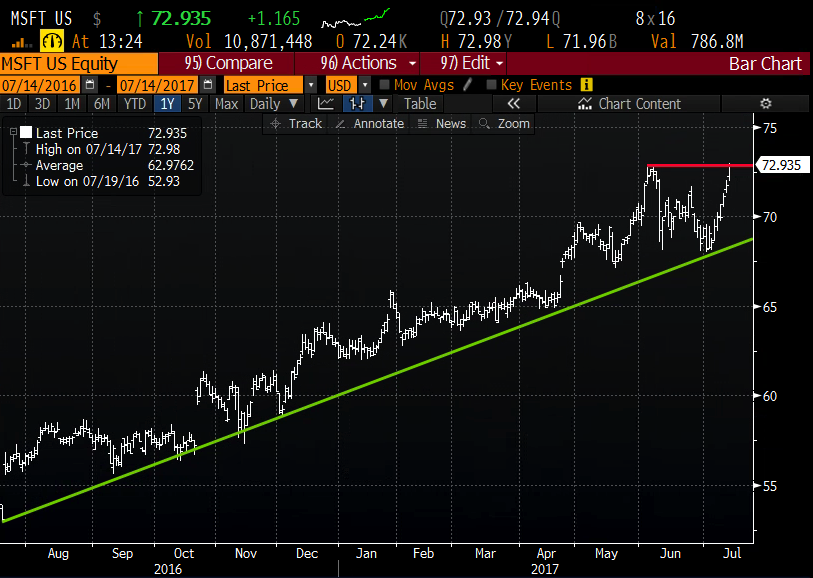 Shares of MSFT trade about 24x expected fiscal 2018 eps growth of about 10%, which is fairly rich on a historical basis. This is not a recent to sell or short the stock, but if it were to come in, and the company is unable to realize that growth rate (which would mark its first double digit annual eps and highest since 2011), then we will clearly hear about valuation in hindsight.

So what’s the trade? We will take a closer look on Thursday prior to earnings, but if I were inclined to play now I might consider one of the two following trade ideas

Bullish: play for consolidation next week after the print and set up to own longer dated calls:

If the stock is 75 or below than the weekly calls sold short expire worthless and you would own the Sept 75 call for 65 cents.

The max risk of the trade is 65 cents if the stock were to make a large move away from strike higher or lower.

The best case scenario is that the stock works higher towards strike but does not rise above 75, in that case the Sept call would appreciate and you would also receive the premium for the short July call.

Bearish/Hedge: Play for a rejection at the prior highs and a pullback to prior support in the mid $60s:

Rationale: this trade plays for at least a consolidation back towards the uptrend but eyeing a breakout down back to fairly healthy near term support that was the staging ground for the late April breakout to then new all time highs: 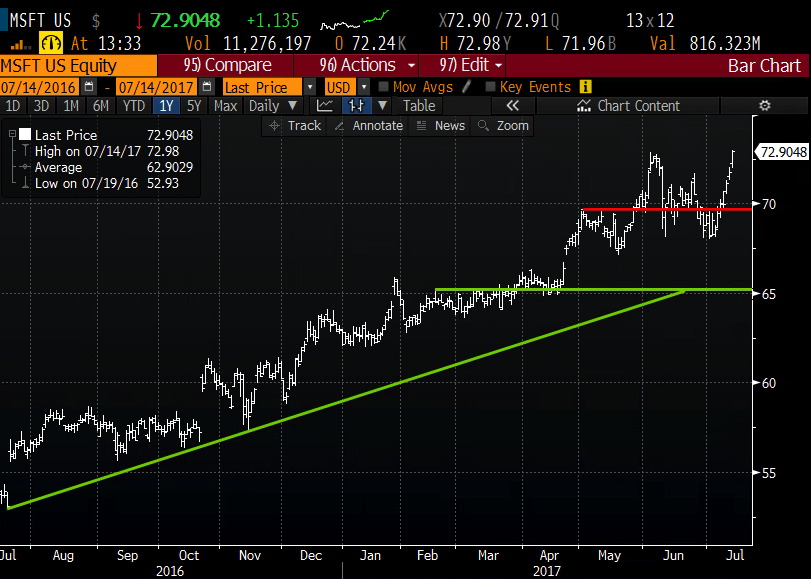