Delta Air Lines (DAL) is scheduled to report Q2 results on Thursday morning before the open. The options market is implying about a 3.5% one-day post-earnings move, which is 2x that of its average one-day move over the last four quarters, but below the 10 year average of about 5%.

Shares of DAL have mildly outperformed the broad market year to date, up 10.5% vs the S&P 500 (SPX) up 8% after making a monster 25% move off of its 2017 lows made in April, and just yesterday making new all-time high yesterday.  The five-year chart of DAL shows the recent breakout to new all-time highs after a two and half year consolidation between $35 and $50:

The breakout is nothing short of impressive with recent positive sentiment buoyed by weak oil prices and favorable seasonal supply demand characteristics. I would add that the recent pr nightmares on the customer treatment/service front clearly has the industry on alert and might result in higher costs associated with overbooking practices. On a purely anecdotal level, I was on a Delta flight from New York to Maine on June 30th that was canceled and the next flight they could get me on was days later. Capacity is tight. And then on my return July 9, on a plane that probably seated 60, they were overbooked by 6 people and were attempting to be as gracious as possible compensating people for bumping to the next day. After the mishaps at United a couple months ago, there is little margin for error from a PR standpoint but has clearly not hurt the stocks of late.

One reason for the strength might also be valuation, with DAL trading 10x expected 2017 eps growth of 1%, on 3% expected sales growth. Not exactly killing it on the growth front, but cheap relative to the market.

As for the setup into the print in the options market, short-dated premiums have been rising, with 30 day at the money implied volatility (the price of options, blue below) at 27%, but below the levels prior to their Q1 report in April, while realized volatility (how much the stock has been moving, white line below) collapsing to new 52 week lows, making the spread between the two the widest in 2017, possibly suggesting options prices to be expensive relative to its recent movement.

If you were inclined to play for a move in line with the implied move to the downside, targeting the recent breakout near $52.70 (red line below) makes sense on a very near-term basis, while the nice round number of $50 seems to be an attractive intermediate term target: 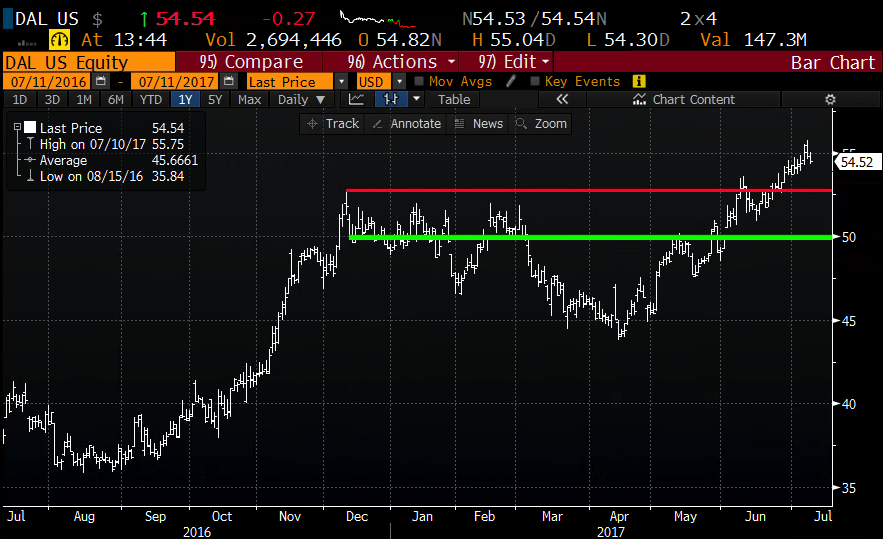 As far as playing for higher highs on a beat and raise, risk reversals might make sense, selling downside puts near the 50 strike and buying upside calls, and doing so for little to know premium outlay.

Rationale – This targets 50 to the downside, and gives some time out to August for it to play out. If the stock moves lower on earnings not all the profits will be immediately realized, on the flip side if the stock goes higher or nowhere the losses won;t be binary and the trade has time for the stock to go down this Summer. If the stock makes big gains higher a 50% stop loss makes sense.