Back on May 30th (here) we took a look at Nike (NKE) in the wake of an implosion in the shares of its athleisure peers as Lululemon (LULU) and Under Armour (UAA) and other apparel makers were making new 52 week lows. Here is what we had to say at the time on NKE’s technical set up when the stock was a little less than 2% from current levels:

Since making new all-time highs for Athleisure brands Lululemon (LULU), Under Armour (UAA) and Nike (NKE) in 2015 and 2016, shares of all three have massively underperformed the broad market falling 41%, 64%, and 22% respectively from those highs. While LULU and UAA have had particularly bad performance year to date, down 26% and 32% respectively, punctuated by big misses and guide downs in the last few months, NKE, despite being down 10% from its 2017 highs is actually up nearly 4% on the year.

To suggest that $50 is an important technical support level for shares of NKE might be an understatement, after the stock has made a series of lower highs and lower lows since its all-time high made in December 2015. Another lower low places the stock in difficult territory below $50 with little technical support till the mid $40s, and a possible gap fill to $40: 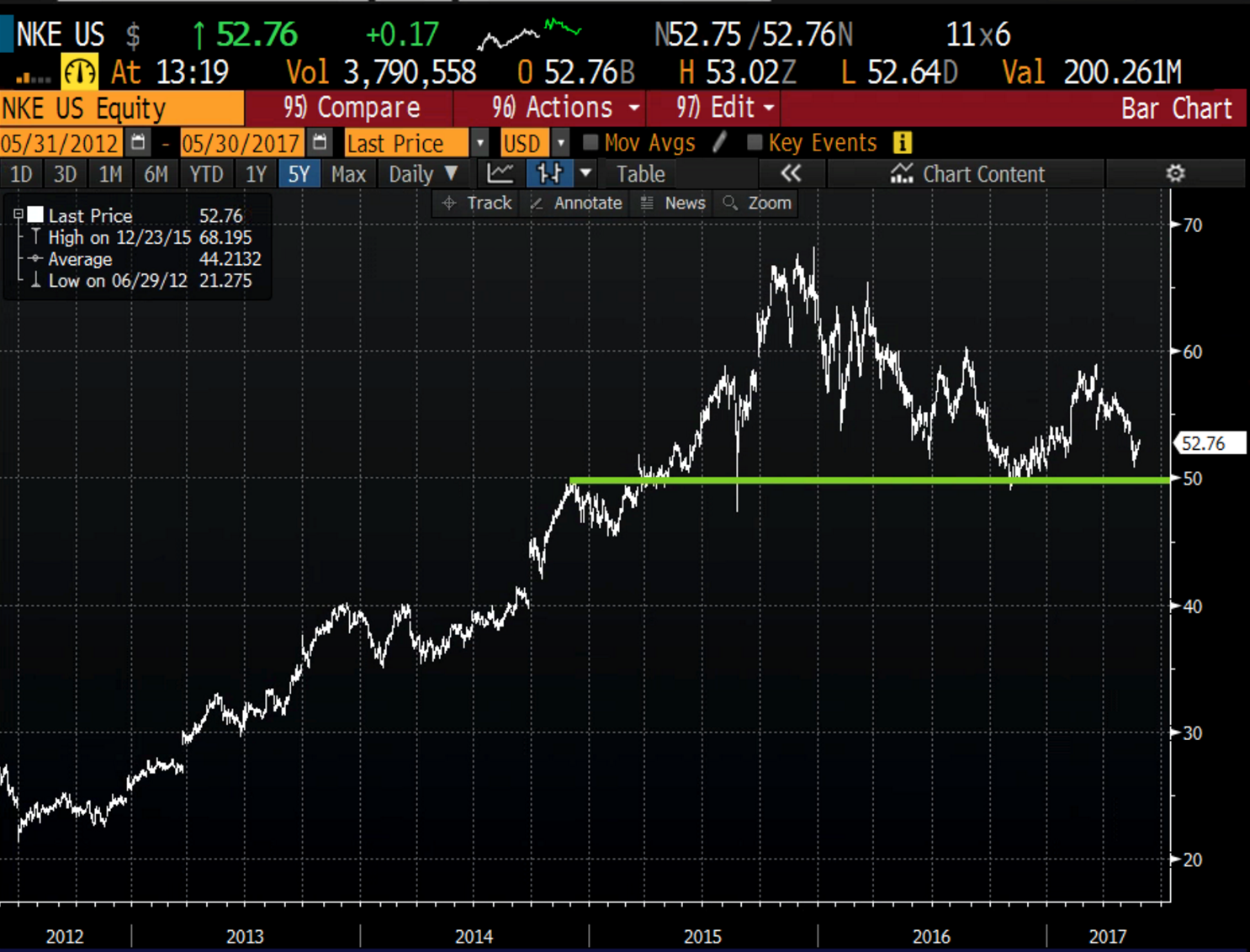 We detailed a defined risk strategy for those inclined to take a bullish view into their next earnings print, which happens to be tonight after the close, here was the trade idea from May 30th:

The stock subsequently bounced and we managed the idea by turning the calendar into a vertical call spread on June 13 (here):

But now let’s focus on tonight’s earnings event. With the stock at $53.50, the tomorrow expiration weekly 53.50 straddle (the call premium + the put premium) is offered at $2.60 if you bought that, and thus the implied earnings move you would need a rally above $56.10, or a decline below $50.90 to make money, or about 5% in either direction.

Let’s check back in on the technical set-up. While the stock has been volatile over the last few months trading between the low and high $50s. Since making its 2017 high in mid-March, just prior to reporting their fiscal Q3 results, that disappointed and caused a 7% decline in the shares the next day, the stock has been in a very well defined downtrend with obvious near-term support near the recent double bottom low near $51:

For those looking to play for a bounce after the results, the June 54/56 call spread (worth about 60 cents is probably the way to play targeting the implied move to the upside). But I think it makes sense for longs to consider near-term protection as a miss and guide down would likely cause a re-test of the very important technical support level $50/51.

Breakeven on tomorrow’s close – This trade breakseven at 51.90 and offers up to 1.90 in profits below. Versus stock is this can add up to 1.90 in protection against stock on a move below 51.90 to 50, there is no protection below that. For those that require unlimited protection or are looking for a large move lower directionally, the 52.50 put can be bought outright.