Regular readers know that technical analysis for trade set ups is merely one input for us. While I am far from a “technician” I consider myself a bit of a tourist whose understanding of chart patterns has for the most part given me a good sense as to how to set targets, stops and often times informs strikes for options trades. In most situations when I am looking at an event driven idea I already have a sense for the companies fundamentals, sentiment surrounding the story, valuation etc so I will quickly punch up the chart to see where it has been and how it might have performed of late relative to its peer group or the broad market.

I just took a look at Micron (MU), who reports fiscal Q3 results tonight after the close. The options market is implying about a 9% one day move tomorrow, which seems rich but the stock has had a 7%, 9% and 12% one day post-earnings move in the last year alone.  Oh and the stock is up 42% on the year, and up 173% from its 52-week lows made nearly 1 year ago. Taking gander at the one year chart, the uptrend is a work of art

Taking a look at the 5-year chart it becomes clear that this stock is on a bit of a mission, to match its prior ten year high made in late 2014 near $36.50:

One thing that should be made very clear is that MU’s business is very cyclical, and those cycles have resulted in some massive multi-year moves for the stock. See below the volatility in earnings and how it has affected the stock price.  MU trades at well below a market multiple in P/E terms due to this cyclicality at 7x.

So the question bulls need to ponder is whether or not the current cycle is a quarter or two away from the end and when will investors start to discount this. In a note to clients dated June 14th, Credit Suisse semiconductor analyst John Pitzer took a stab at an answer and suggested ‘Stronger for Longer’ : 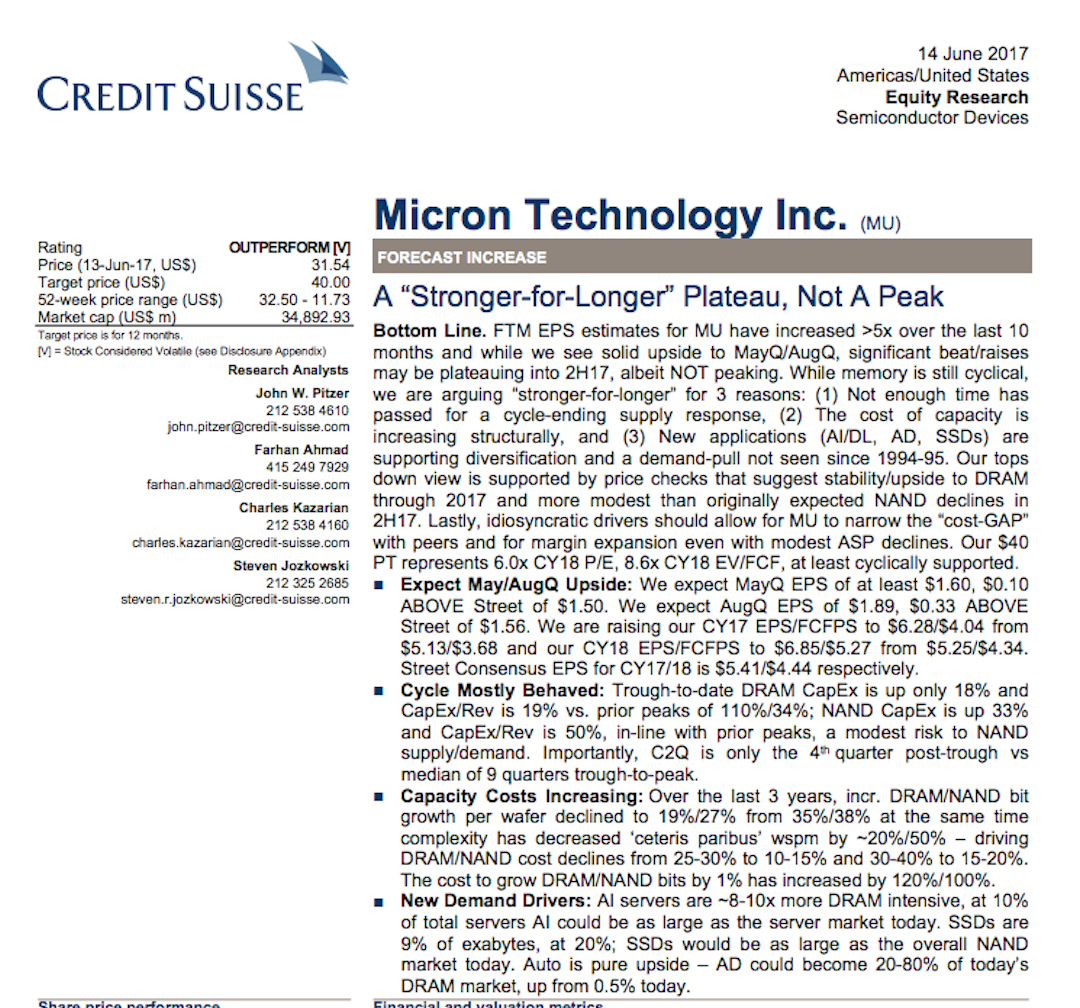 Oh and Sentiment towards the stock is overwhelmingly bullish with 24 Buy ratings, only 4 Holds NO Sells with an average 12-month price target of almost $40. Surprisingly given the performance of the stock short interest is at only 5% of the float.

Sentiment and strength in semis overall might suggest the path of least resistance is higher, at least until it kisses that prior high near $36.50.

For those who are looking at defined risk ways to play for this outcome, you might consider the following strategy.

For those who want to be contrarian and play for a down 10% move, and then a follow through over the next few months, you might consider the following strategy:

Rationale – In both these cases it’s a fairly large outlay on a percentage basis vs the underlying. These should be treated as defined risk long or short stock alternatives because of that. Both can be worthless if wrong, but both risk much less than the implied move on the event itself and look farther out beyond that in case of follow through