The term dot-com bubble, describing the Nasdaq surge in the late 1990s was a bit misleading. While Internet companies, browsers, ISPs, portals, and e-commerce companies were the darlings driving a lot of the attention to the nascent sector, it was telecom equipment companies behind the scenes like Cisco Systems (CSCO) that made the connection to the worldwide web for most possible. It also garnered a ton of market share for a short time becoming one of the largest companies in the world in 1999/2000.

Taking a quick gander at the 20-year chart of the Nasdaq Composite (CCMP) vs CSCO the correlation between the two is very clear, right up until mid-2010 when the two embarked on very different paths:

While the CCMP is just 1% or so from its all-time highs made two weeks go, CSCO remains 60% from its 2000 highs. I guess this is worth noting on a day that Oracle (ORCL) has finally made a new all-time high from those glory days after posting better than expected results last night and guiding fiscal 2018 eps growth to double digits for the first time in six years, if it happens.

When CSCO reports their fiscal Q4 in mid-August it is likely to cap their lowest annual eps growth in six years, of a measly 1%. But next week the company is holding their annual analyst day, at which some expect the company to revise their long-term revenue model lower as the company looks to transition a large portion of their business to a recurring software model that is likely to yield longer term eps benefits. That’s not too different from what companies like ORCL are currently reaping the benefits of. Here is a quick preview of Credit Suisse’s CSCO analyst Kulbinder Garcha expectation for next week’s meeting: 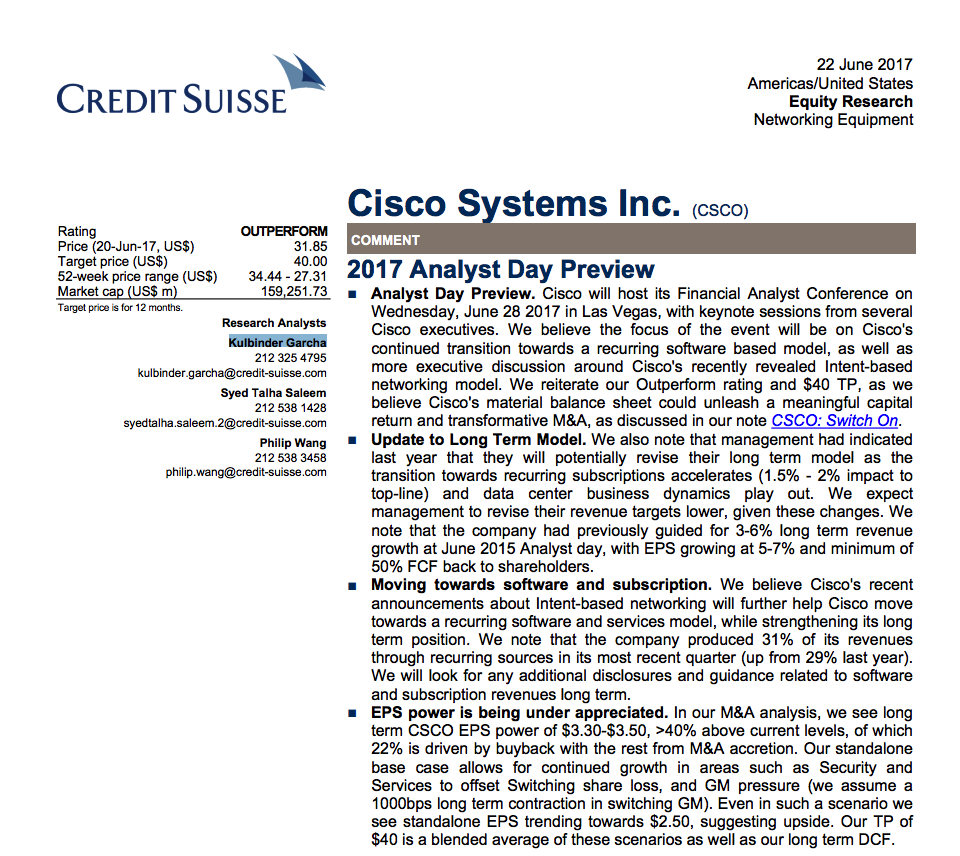 Last month it was CSCO’s fiscal Q4 guidance for the current period that sent the stock down 7% the day after earnings, causing some investors to question the pace of their transformation. In an interview the same day with Barron’s Teirnan Ray, CEO Chuck Robbins

Robbins noted that the company’s continuing to progress as promised, based on a few different pieces of evidence. One is more than doubling deferred revenue from software and subscriptions over the course of eight quarters has more than doubled to $4.4 billion.

He said “you are going to begin to see innovation in the core, as our customers add billions of devices, and they want the network to be automated, and to provide insights through analytics.”

Robbins declined to specify a time frame for the company’s developing more “core” innovation, but that such “organic” innovation, meaning aside from acquisitions, has already been showing up in products for the service provider market.

Investors will expect to hear more detail on “core” and “organic” innovation progress and opportunities and how this will affect long term growth and profitability at next week’s meeting. I think it is safe to say that expectations are not exactly high into the meeting, and from my experience managements like to hold something positive back for such meetings.

Shares of CSCO trade well below a market multiple at 13x expected fiscal 2018 eps growth of 3%, very committed to capital return with an existing $15 billion buyback program in place and pays a dividend with a current yield of 3.6%.  This is all made possible by a tremendous balance sheet that consists of $68 billion in cash, which is nearly 43% of their $160 billion market cap, 22% net of their $32 billion in debt.

The slightest bit of unexpected good news and the stock likely breaks out above near-term resistance at $32, above the one month range, with the possibility of a gap fill back towards $34 as the company gets ready to report fQ4 on Aug 16th:

For those that agree with that near-term catalyst view, long premium directional trades look very attractive with 30 day at the money implied vol at 14.25%:

If you were just inclined to play a pop after the meeting, the June 30th weekly 32 calls are offered at 28 cents, less than 1% of the stock price and would break-even at 32.28, up 35 cents from where the stock is currently trading in six trading days.  Of course that’s quite binary.

you might consider paying 40 cents for the Aug 33 calls (stock ref $31.93). Again, thinking about ORCL’s breakout to new all-time highs, a once laggard, that is telling a new story, executing well and the stock is being re-rated. Timing on CSCO’s ability to do the same is hard, but upside calls are dollar cheap.