Tonight after the close Oracle (ORCL) will report their fiscal Q4 results. The options market is implying about a 4.75% one day move tomorrow. With the stock just below $46.45, the June 23rd 46.50 straddle (the call premium + the put premium) is offered at $2.20, if you bought that and thus the implied move, you would need a rally above $48.70 or a decline below $44.30 to make money. The average one-day post-earnings move over the last four quarters has been about 4.5%, The ten-year average one-day post earnings move has been about 5%.

Shares of ORCL are up nearly 21% on the year, approaching the 52 week and multi-year highs made following their fQ3 print in mid-March, once again threatening a breakout from its dotcom bubble highs:

But don’t take my word for it, Carter Braxton Worth, chartist extraordinaire from Cornerstone Macro Research, laid out the case for a breakout on last Friday’s Options Action on CNBC, click below: 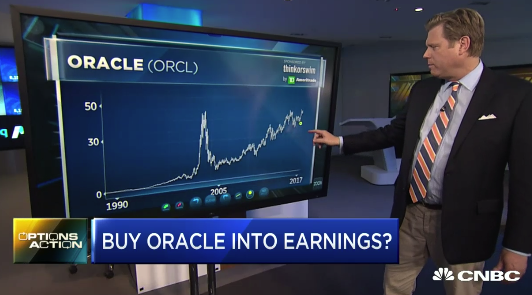 The pace of growth in cloud offerings and what investors are willing to pay for it has been a volatile topic for the stock in the last few quarters.

Back in mid-December, initial investor discontent centered around weak organic cloud revenue in their fq2, per Barron’s:

While the company now claims to have surpassed competitor Salesforce.com (CRM) in cloud computing revenue, the Street is focused on the fact that cloud revenue was weaker on an “organic” basis, meaning, when stripping out the benefit of some revenue from Netsuite, which Oracle acquired during the quarter.

In mid-March, it seems that investors were a bit more sanguine on the topic, despite the company only grow total sales 3% year over year in fQ3, per Barron’s:

Oracle CEO Safra Catz, one of two people who hold the CEO title, along with Mark Hurd, said that Oracle continued to experience “hyper-growth.”

Catz said the company’s cloud computing software sales were now at a rate of $5 billion per year. Added Catz, the rise of cloud is “improving nearly every important non-GAAP business metric you care to inspect; total revenue is up, margins are up, operating income is up, net income is up, EPS is up.”

Hurd said the company had sold more “SaaS” and “PaaS,” industry jargon for types of cloud software, than Salesforce. Hurd said it was “just a matter of when we catch and pass Salesforce in total cloud revenue.”

Founder, CTO and chairman Larry Ellison said that he is most excited about “our second generation IaaS business,” or “Gen2,” as he referred to it. He said that the new offering is “both faster and lower cost than Amazon Web Services.”

So what’s the trade? If you were inclined to think that strong trends in Q3 continued into their seasonally strong Q4, and guidance was to be good, then playing for a breakout with defined risk makes sense.

Rationale: this trade risks 1.5% of the stock price for a break-even up 2.8%. The payout is potentially 3x if the stock were to rally 10% following results. If the stock goes up tomorrow it is likely to move up at least in line with the implied move as a breakout to new all-time highs would likely yield a greater than expected move.