Adobe (ADBE) reports their fiscal Q2 results tonight after the close. The options market is implying about a 4.5% one day move tomorrow, which is basically in line with the average one-day post-earnings move of about 4.5% over the last 4 quarters and the below the 10 year average of 5.2%.

Shares of ADBE are up a whopping 36% on the year, and up 55% from its post-Brexit 52-week lows made late June of 2016. For the better part of 2017 ADBE has dutifully marched higher from the lower left to the upper right with fairly small intra-day ranges. Following the Q1 earnings gap in March, the stock consolidated gains for a month before making a new high but has since fallen victim to two fairly sharp bouts of downward volatility. The stock may have near-term technical resistance at the uptrend from the start of the year very near the prior highs, while the earlier breakout level near $130 should serve as healthy near-term technical support: 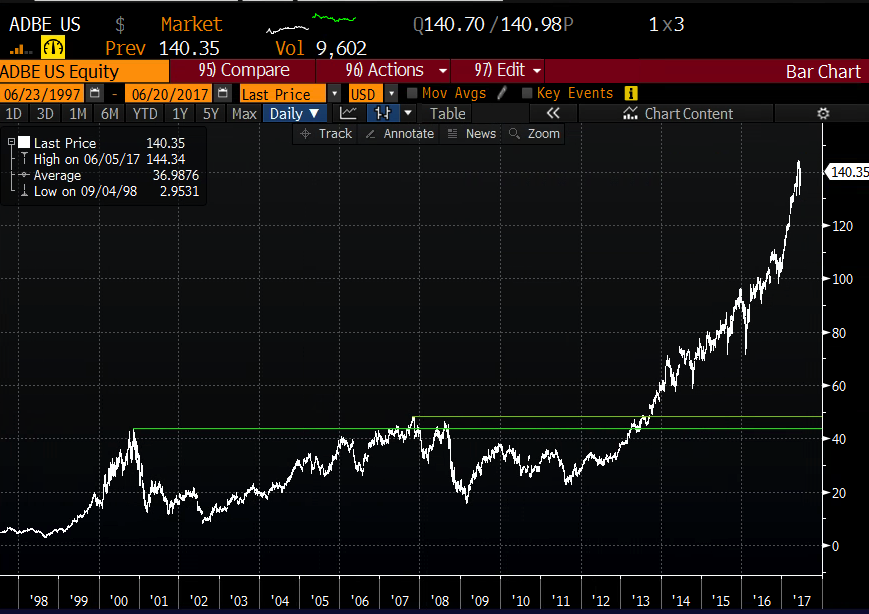 Wall Street analysts are fairly positive on the story, even at theses lofty levels, with 25 Buy ratings, 6 Holds and only one sell with an average 12-month price target of about $18, about 5.5% from where the stock currently trades.  The stock trades 35.5x expected EPS growth of 31% in f2017, and 28x expected f2018 eps growth of about 26%. That seems fairly reasonable when you consider current consensus is calling for 20% sales growth in f2017 and f2018. Its multiple to sales is hefty at nearly 10x for a company expecting to book $7 billion in sales, I would add that there are very few large-cap tech companies growing sales at 20% off of that sort of base. For instance, SalesForce.com (CRM) grew sales 26% last year to $8.4 billion, with GAAP eps of only 26 cents, vs ADBE’s eps of $2.32 on $5.85 billion. Not all SaaS company’s profitability are created equal! If we were playing would you rather, I think it’s fairly clear that ADBE is a better bet on valuation, relative to growth and profitability.

But for now, despite PE to Growth that is attractive, and obviously relative valuation, ADBE shares are priced to perfection, with very bullish sentiment and volatility bands that have recently been widened in a fairly dramatic fashion.

Therefore anyone looking to be or get long in ADBE at these levels should consider defining risk.

Breakeven on June 30th expiration – This trade breaks even at 142.90, about a dollar and a half higher than the stock. That’s the main cost of defining risk in this case, a slightly higher entry. On the downside, the most that can be lost is 2.90, no matter how low the stock goes.The max gain is at 150 on July expiration where the 2.90 risked can make up to 7.10.

Rationale – ADBE is up 36% on the year making new entries difficult. And for those that have been long the stock it may make sense to define risk in case the stock puts in a significant hiccup. This defined risk trade does that, targeting further upside to 150, while defining risk to just 2.90, less than half of the expected earnings move.