In case you missed it, Amazon (AMZN) made a nearly $14 billion bid for Whole Foods Markets (WFM) on Friday. The weakness in most retail stocks year to date was only exacerbated on Friday, with recent bounces in big box retail stocks like Target (TGT) and Walmart (WMT) reversing hard, and relative strength leaders like Costco (COST) dropping 10% since the announcement.  The news has investors scrambling to consider who is next in the grocery space, but also what other spaces within retail might benefit from an online-offline barbell approach, especially when you consider that less than 10% of U.S. retail sales are actually online… with AMZN accounting for a disproportionate amount of the year over year growth (per Slice): 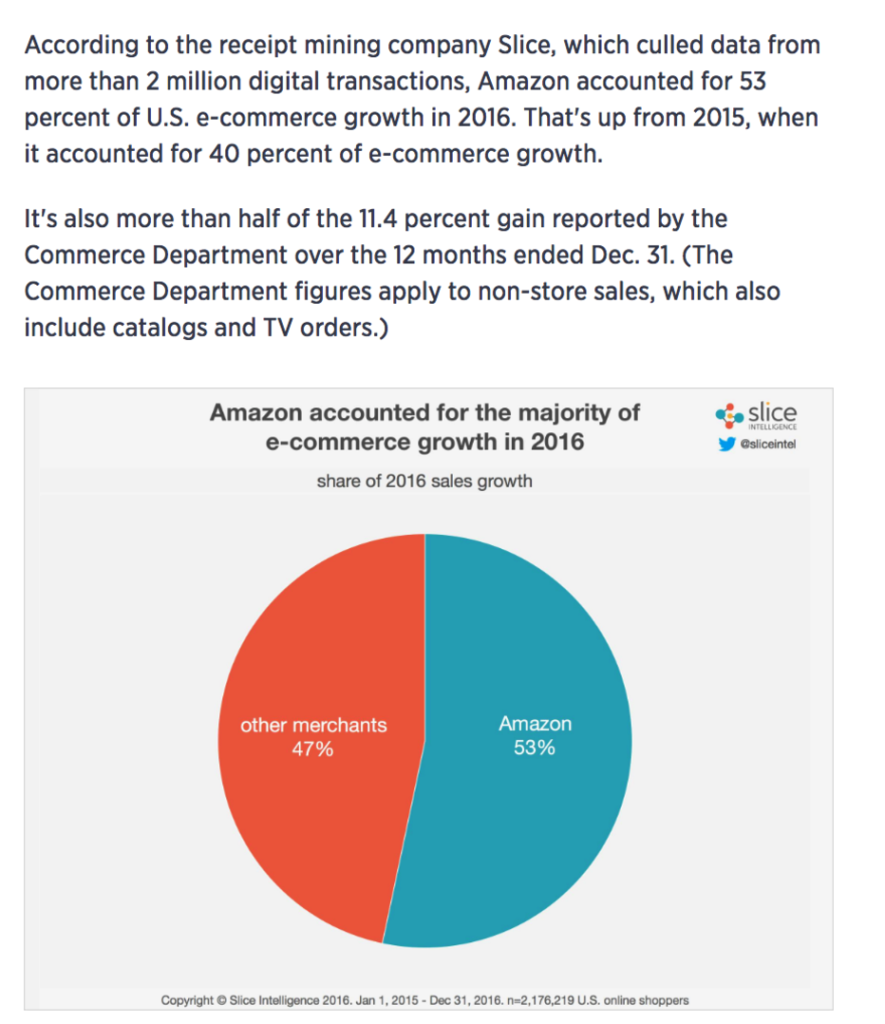 So while AMZN has their hands full redefining the grocery shopping experience I suspect there will be other subsectors in retail that are ripe for this sort of tweaking of the old and new shopping models.

We have this perfect storm in retail right now, and that is we’ve known for a long time that we’re overstored, we have about seven feet of square feet per capita, about two or three for every one the Canadians have. Middle-class wages stagnant. I mean, the engine powering all of this is just firing on three cylinders instead of eight. Amazon, people spending more money on coffee and experiences. You have this perfect storm of bad things and the reckoning is here because we’ve known about these things for 10 years. It seems like retail chugged along and they did it through constant promotionality which is like a payday loan, it comes back to haunt you.

But Galloway highlights the fact that some apparel retailers have gotten hip to the changing trends, and have transitioned a large portion of their business online, while the bricks and mortar retail experience remains important in population centers:

Urban Outfitters, — full disclosure, I’m on the board of Urban Outfitters — does about 40 percent of their sales online. To a certain extent you could argue retailers are the highest-margin e-commerce players in a while. They got it early and often.

For Alibaba, buying into physical retail companies isn’t about improving its distribution. Instead, it points to its ambitions to offer its services to anyone selling goods, online or offline. In recent years, it has bought a majority stake in department-store operator Intime, a 20% stake in electrical-appliance retailer Suning and minority stakes in a couple of supermarket chains.

And as the WSJ wrote back on June 5th, it’s about the data for BABA:

Alibaba’s vast database of customers and merchants has already made it almost a monopoly in China’s e-commerce world. Through its Ant Financial affiliate, it also dominates payments in China. Its appetite for yet more information about customer habits and preferences is insatiable.

Which brings me to a much-maligned segment of Retail, Department Stores, with stock’s like Macy’s (M) down 36% on the year and down 50% from its 52-week highs made in November. Over the last few years, the company has been prodded by activist investors, kicked around as private equity target, in the cross hairs of strategies with all seemingly interested in their real estate holdings, which as recently as 2015 activists valued close to $20 billion, well above its current $12 billion enterprise value.

There is little debate that AMZN is pressuring margins in most subsectors of retail, and Macy’s has been one of the hardest hit with earnings having topped out in 2014 at $4.41 and expected to be $2.87 in 2017. But the stock trades 8x expected fiscal 2018 eps that was taken down in May. Activists have exited, deal chatter simmered, and real-estate values talked down. While companies like BABA has publicly stated they are not looking to make a splash anytime soon in the U.S. Retail market, an investment and possibly a strategic deal with a brand like Macy’s might make a lot of sense. Heck an outright take out for a 30% premium would not be crazy for a company with $24 billion in sales, a $7 billion equity market cap, real-estate that might be worth at least as much as their $6.7 billion in debt.

Much like the Kroger trade idea from Friday (here) making a defined risk contrarian bullish bet on Macy’s might make sense at current levels for a number of reasons.

Rationale – This trade is a good way to play for a counter trend rally in Macy’s with a long time horizon for any positive news to come out. If the stock is left for dead, the most that can be lost is 2.00, less than 10% of the underlying, but can make more than 30%, so as a stock alternative it is good defined risk/reward with the cost being an effective entry of $25 (the breakeven) in the stock versus buying it here at 23 with unlimited risk down.