Back in early February the New York Post highlighted the potential for Amazon (AMZN) to not only take on quick stop convenience grocery stores, but also stores “that could span anywhere between 10,000 and 40,000 square feet” and that “Amazon will utilize technology to minimize labor” , which could call “for staff to max out at 10 workers per location during any given shift”.

At the time, this news led me to consider the potential changes in the grocery store landscape (Does Amazon Dream of Electric Shoppers?): 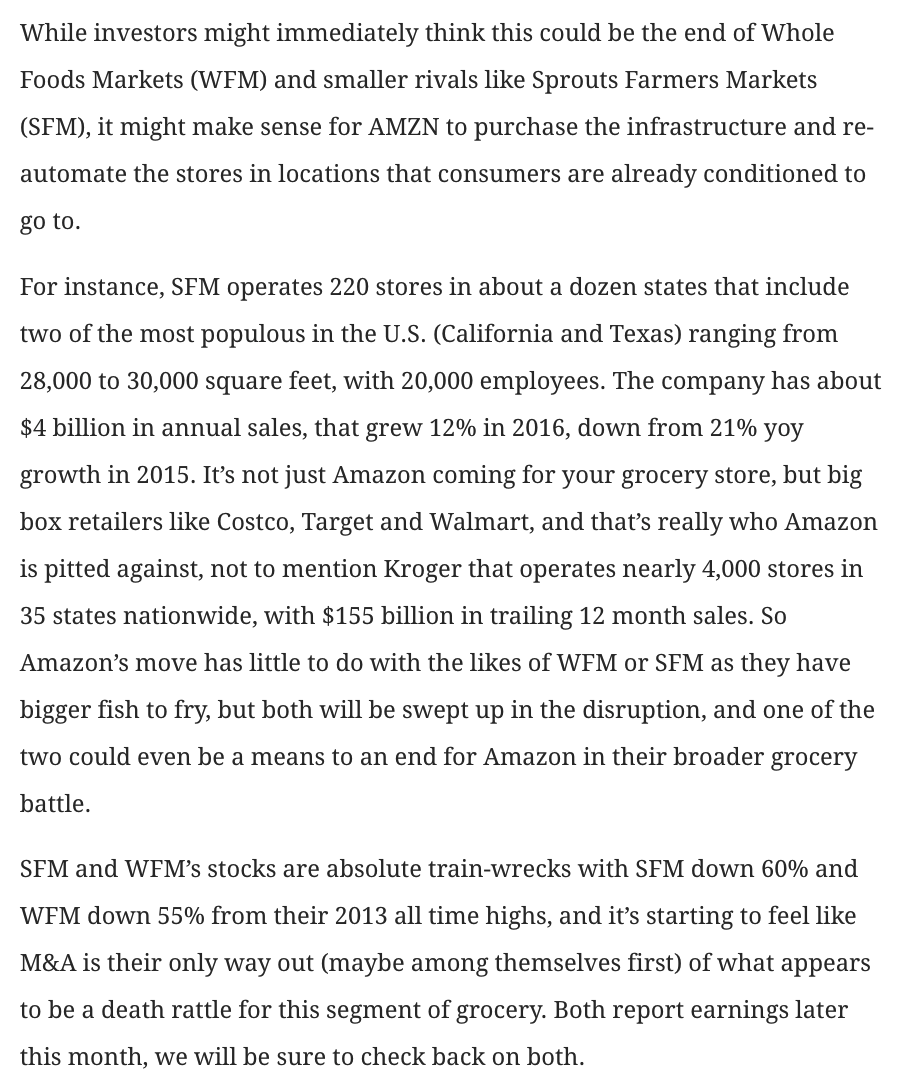 This morning’s news that Amazon is paying $13.7 billion to buy Whole Foods Markets (WFM) came as a shock to many, but it makes perfect sense for a company like AMZN that is looking to expand in categories where consumers are routine shoppers, such as food. AMZN will gain close to 450 Whole Foods stores in 42 states.

Investors see the move as quite binary, behold:

The reaction is that this is a massive threat to Costco’s (COST) membership model, has a huge potential to make inroads into Walmart’s (WMT) success in groceries, and evidence that pure-play grocers like Kroger (KR) have competition coming from every direction.

I want to focus on KR, not only because the stock is one of the hardest hit in retailing today down about 11.5%, but because it was down 18% on Thursday after slashing 2017 guidance, per MarketWatch:

This past weekend, prior to KR’s weak guidance, Barron’s highlighted Kroger’s Competition Problem… Something’s rotten in the grocery aisle. Could it be Kroger’s earnings?, suggesting that despite “traditional grocery stores captured about 75% of the grocery market during April, that share could come under pressure as the Internet continues to disrupt the space” and that Kroger appears to realize this, and has been cutting prices to keep customers returning to its stores. Jain notes that Kroger’s Ohio division has just implemented broad-based price cuts on 2,000 private-label items, a sure sign of the times.”

Well I think it is safe to say that KR’s stock was hit with a one-two punch this week, down about 30% making new 52 week and multi-year lows.

With the stock just below $22 it trades at a little less than 11x fiscal 2018 eps that is as of yesterday’s guidance expected to be down 5% year over year despite sales growth expected to grow 5% to $121.5 billion!

AMZN may well take a big bite out of that in the years to come, but not likely to have a meaningful impact, certainly not in the next few months, and the given what might be an active M&A environment, KR might have already gotten a bit overdone on the downside.

The next identifiable catalyst will be fiscal Q2 results on Sept 8th before the open.

If you are inclined to play for a bounce back to the recent break-down level near $29, the following defined risk trade does that:

Rationale: break-even up 7%, risking 7% to possibly make up to 25% if the stock were to retrace this week’s move. I would add that the premium paid for WFM was 27%.