Shares of Nvidia (NVDA) did something this morning that it has done on most trading days over the last month, made a new all time high. But this morning’s gap was the largest at about 4% since its two-day post-earnings rally May 9 & 10th of 25%… and then wham, a massive reversal, down nearly 13% intraday:

This reversal is also on massive volume, more than 2x average daily volume as I write with two hours left in the trading day.

What caused the reversal? Possibly word that well followed short seller Andrew Left of Citron Research would appear on CNBC’s Halftime Report and reiterate his bear case, which he did at 12:45pm eastern time, watch here: 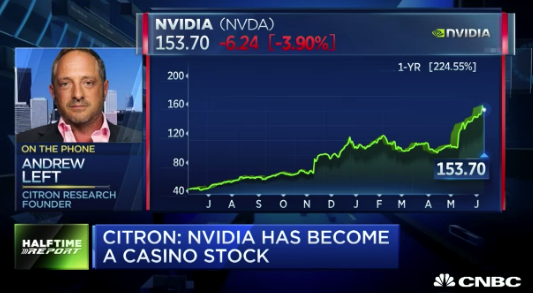 So now what? Has the fever broken? Your guess is as good as mine, but the massive gains and the ridiculous volatility might cause some shareholders to book some profits and look for a re-entry, possibly towards the breakout level near $120, which was also the short term double top from December and February:

Wall Street analysts have been tripping over themselves for months upping estimates and targets, while the stock remains hotly contested among investors and traders. Today’s reversal from an opening gap at an all-time high on massive volume suggests the stock may follow through on the downside next week, $140 would likely be a near-term bounce target, but for those who think the jig is up, $120 would be an intermediate-term downside target.

Obviously, it is hard press on the short side (and I would certainly try to enter short trades on a bounce), but those willing to define risk to make directional bets might benefit from short dated implied volatility (the price of options below, blue line) catching up to realized volatility (how much the stock has been moving, white line):

While playing for a continunation move back towards an obvious support level might feel right, it probably makes sense to wait for a bounce, we will circle back next week with trade set ups.