Out with the old, in with the new. This morning Ford’s (F) board fired their CEO of three years and replaced him with their head of the autonomous driving unit, per Bloomberg:

The top headline is worth focusing on, modernize business using big data, ai and advanced robotics. I suspect that headline means they will be laying off tens of thousands of their 200,000 workers and frantically retraining tens of thousands more. Shares of F are down about 30% since Fields took over as CEO in mid-2014, down about 45% from its 10-year highs, and down 85% from its all-time highs made in the height of the dotcom bubble:

This has all the proper buzz words. But will this shake-up get investors to take another look at a stock? Maybe. F trades 7x earnings, pays a dividend with an annual yield of 5.5%, and despite expected annual eps decline of 12%, analysts see sales growing 2% this year to a record $144 billion. But before you get too geeked up on Ford as the next great AI play, remember that the next wave of auto fortunes won’t be made manufacturing the actual car, but controlling the hearts and brains of it, the heart as the things that make it go (batteries), and the brains which allow it to drive itself (software). I suspect that for Ford to succeed on this front, and change a hundred-year-old way of thinking as it relates to cars, they will need to at least partner on the brains.

Last year Bloomberg ran this killer graphic, Technology and Car Companies Are More Intertwined Than Ever, detailing recent defensive moves by auto-makers in these spaces, and their costs:

The line between the technology and automotive industries is blurring. The rise of rideshare companies such as Uber and Lyft means that transportation is being tied ever more closely to your cell phone, while autonomous driving technology is turning your car into a computer. But these developments are expensive: Carmakers’ R&D budgets almost doubled to $89 billion between 2006 and 2016. 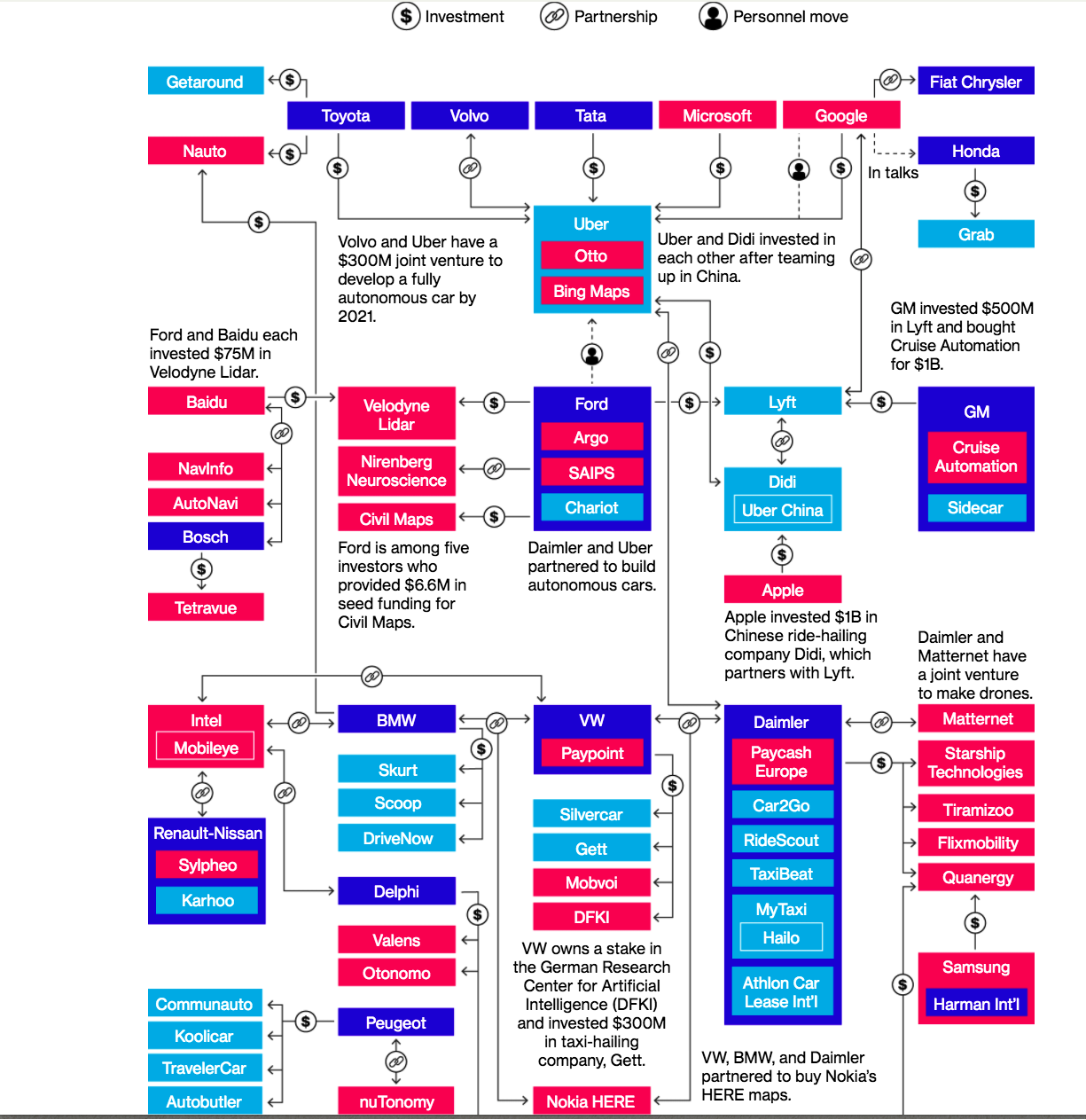 What’s about to happen in the auto space will be one of the largest trends in tech over the next couple decades. And entire business models are at risk, both from a hardware (the actual car)/software (driverless tech) perspective, but also on the entire model of car ownership (Uber, Lyft).

Investors got hip to the opportunity of Nvidia early last year when they realized the possibilities of the use of their graphics chips for AI functionality used in autonomous vehicles. Intel paid $15 billion for Mobileye, nearly 30x existing sales. Samsung paid $8 billion for Harman Kardon and the deal flow will go on and on until this graphic is a lot smaller. Silicon Valley now sees the car like they saw the PC, a sum of its guts and operating systems, not the brand name on the outside (Dude, you’re getting Dell stock!)

Ford is remaking their c-suite to keep up with the billions of dollars flowing into the space. It’s at the root of a good bit of m&a in tech over the last year. Of course, simultaneous to this, the automakers have other problems on the loan and sales fronts. We’re seeing major shakeups in the industry and for the big automakers, it’s just beginning.