Last week was a bloodbath for department store stocks. Shares of Macy’s (M), Nordstrom’s (JWN) Dillard’s (DDS), and JC Penny (JCP) were all down between 15 and 20% after posting disappointing earnings and guidance.  The XRT, the S&P Retail sector etf was down about 3% on the week, placing the etf down about 4% on the year.

While pundits routinely site Amazon.com (AMZN) for the devastation in the sector, it’s worth noting that a little less than 10% of the nearly $5.5 trillion in U.S. retail sales last year, came from online sales. In 2016 Amazon booked $136 billion in total sales (a little more than 10% was their web services division AWS). So while AMZN’s selling method is clearly disrupting traditional retailers and taking some business, the bigger effect so far is in pressuring margins, causing retailers to match prices and free shipping options. It’s been easy for pundits to call AMZN a wrecking ball in retail, there will be others. In 2016, AMZN accounted for half of the growth in eCommerce in 2016, per eMarketer, which was only up 11.4%: 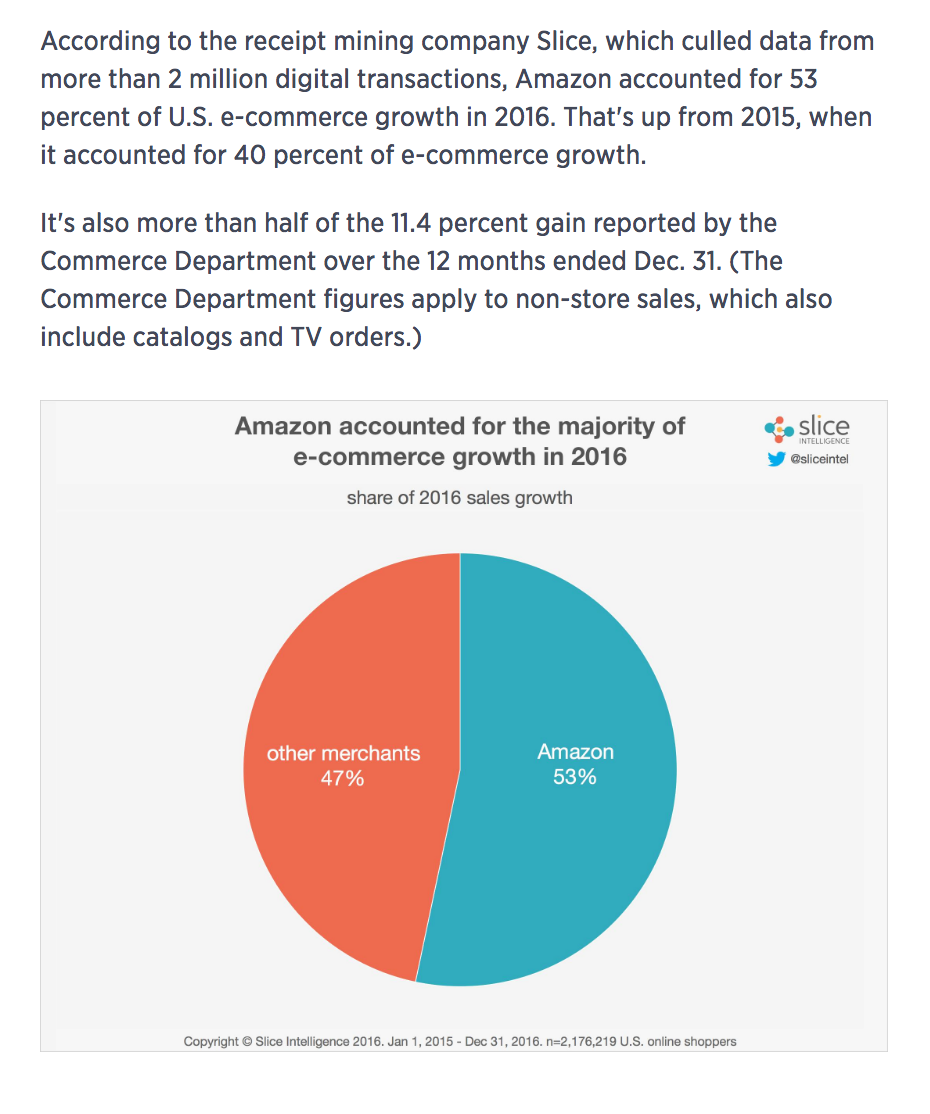 But 2016 also saw consumer products giant Unilever pay $1 billion for Dollar Shave Club, possibly their bid to go straight to consumers, not just for wet shavers. And Walmart (WMT) who gets less than 5% of its sales online, saw decelerating eCommerce growth in their last quarter reported in Feb, that included Christmas holiday. Oh and AMZN’s sales have been growing between 20 and 27% since 2012, with North American retail sales at the how end of that range. Which might have been a big reason behind WMT’s $3 billion purchase of AMZN clone Jet.com last August, a company with less than $1 billion in annual sales at the time of the deal. i suspect much of the further dispruption in retail will likely come from this sort of behavior.

What’s also interesting is that five retailers, AMZN, Costco (COST), The Home Depot (HD), Lowe’s (LOW) and Walmart (WMT) were all at or very near 52-week highs last week (COST was at a high May 4th prior to disappointing April comps).  These five stocks make up about $1 trillion in market cap easily more than all of the other retailers in the S&P 500 (SPX) combined, with about $900 billion in 2016 sales, or a little less than 15% of the total $5.5 trillion in the U.S. (AMZN, COST, HD & WMT all have sales outside North America). So while investors are repricing most retail valuations (both up and down), not all are losers, there are some dominant big box winners and those with an obvious eCommerce strategy.

As far as the XRT is concerned, I have been fairly adamant for months that the equal weight nature of the etf makes it vulnerable to the aforementioned trends as it is not buoyed by the outperformance by the winners.  If there was ever a sector where stock picking remains crucial it is retail. The XRT remains the most vulnerable sector etf in the market. On the chart I see a massive head and shoulders top forming, with $40 the neckline n the XRT. We will continue to roll and set up to own the breakdown as two secular trends converge, the re-emergence of the dominant big box retailer and their continued push towards omnichannel selling: