After the close Snapchat parent Snap Inc (SNAP) will report their first quarter as a publicly traded company. Yesterday I had a short preview of the implied move:

and a very quick take on the technical setup (not much to talk about after just two months of trading activity): 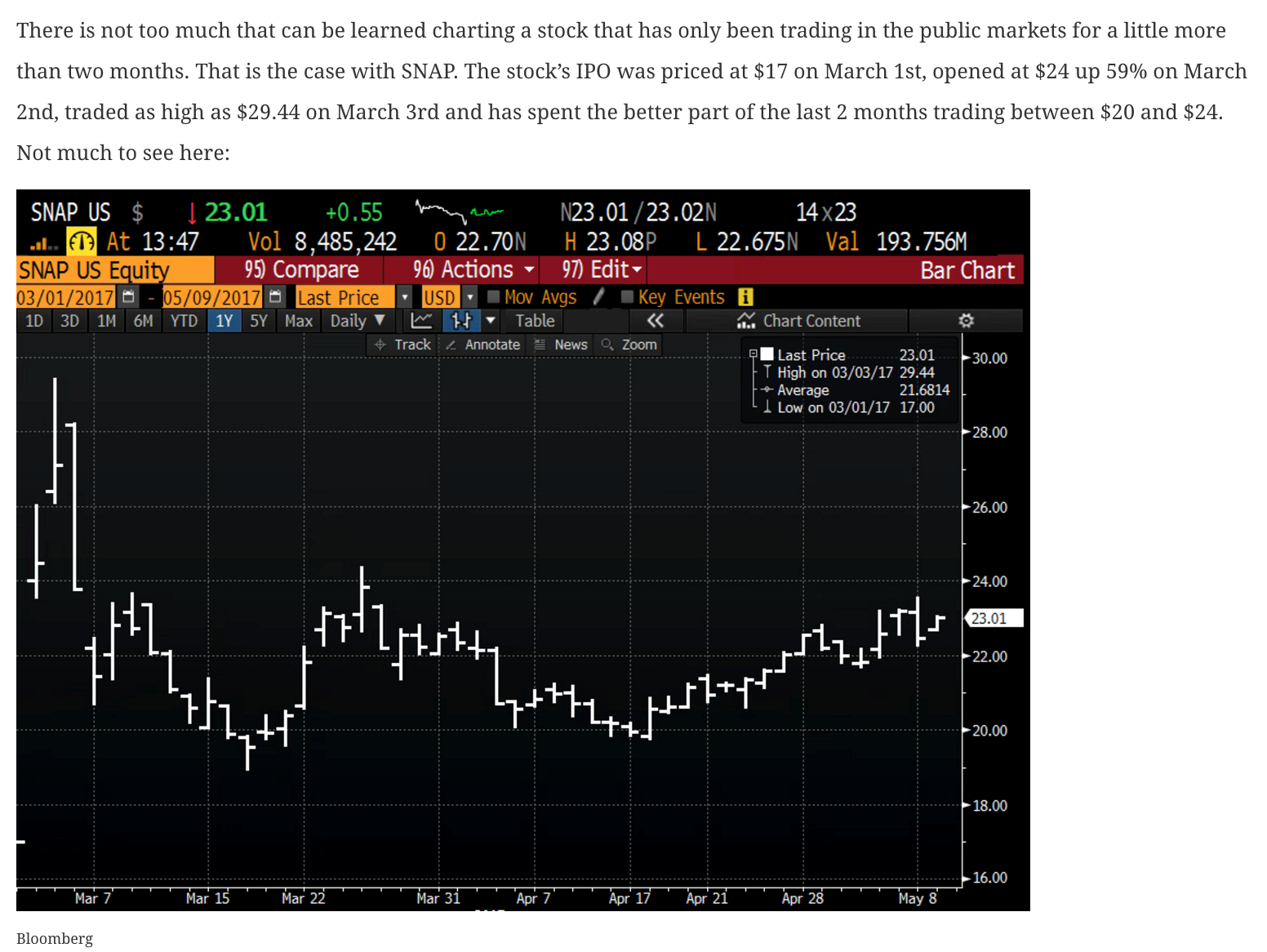 There are some fairly simple things Wall Street analysts will be looking for on the conference call to try to get a sense of how to cover this company in the future. First and foremost, will CEO Evan Speigel be on the conference call and take QnA? This is a subtle point, but his involvement on the call would indicate future accessibility and transparency towards analysts in what until now had been a fairly secretive corporate culture, largely the result of the founder himself.

RBC Capital’s star Internet analyst. Mark Mahaney, who rates SNAP a Buy with a 12-month price target of $31 offered his quarterly estimates and data points from the prior period that might have influenced results in a note to clients:

What’s interesting to me about Mark’s quarterly revenue estimate (that is 7.5% below consensus), he is one of the 12 Buy ratings on the stock, while 17 analysts rate the stock a Hold and 6 a Sell. It appears in the near term he is cautiously optimistic on their ability to ramp monetization.

Mark highlights the following metrics to keep an eye on, which you are prob fairly familiar with by now:

I suspect for the time being, and the honesty in which the company projected their course to profitability during their recent roadshow, that long-term investors will be patient. I think the same could have been said prior to other high profile social media stocks at their first public report, but it didn’t stop investors from crushing shares in Linkedin, Facebook and Twitter, in what seems like an eternity ago. One day performance following first earnings report:

Given the stock’s range since the IPO of just below $20, and just above $29, there is certainly some traders in the name, But with short interest approaching 15%, and the top 10 holders owning nearly 50% of the float, with a supposed extended lock-up of 12 months for new holders on the ipo, we might be hard pressed to see this thing fall flat right out of the gate, or stay down for too long. 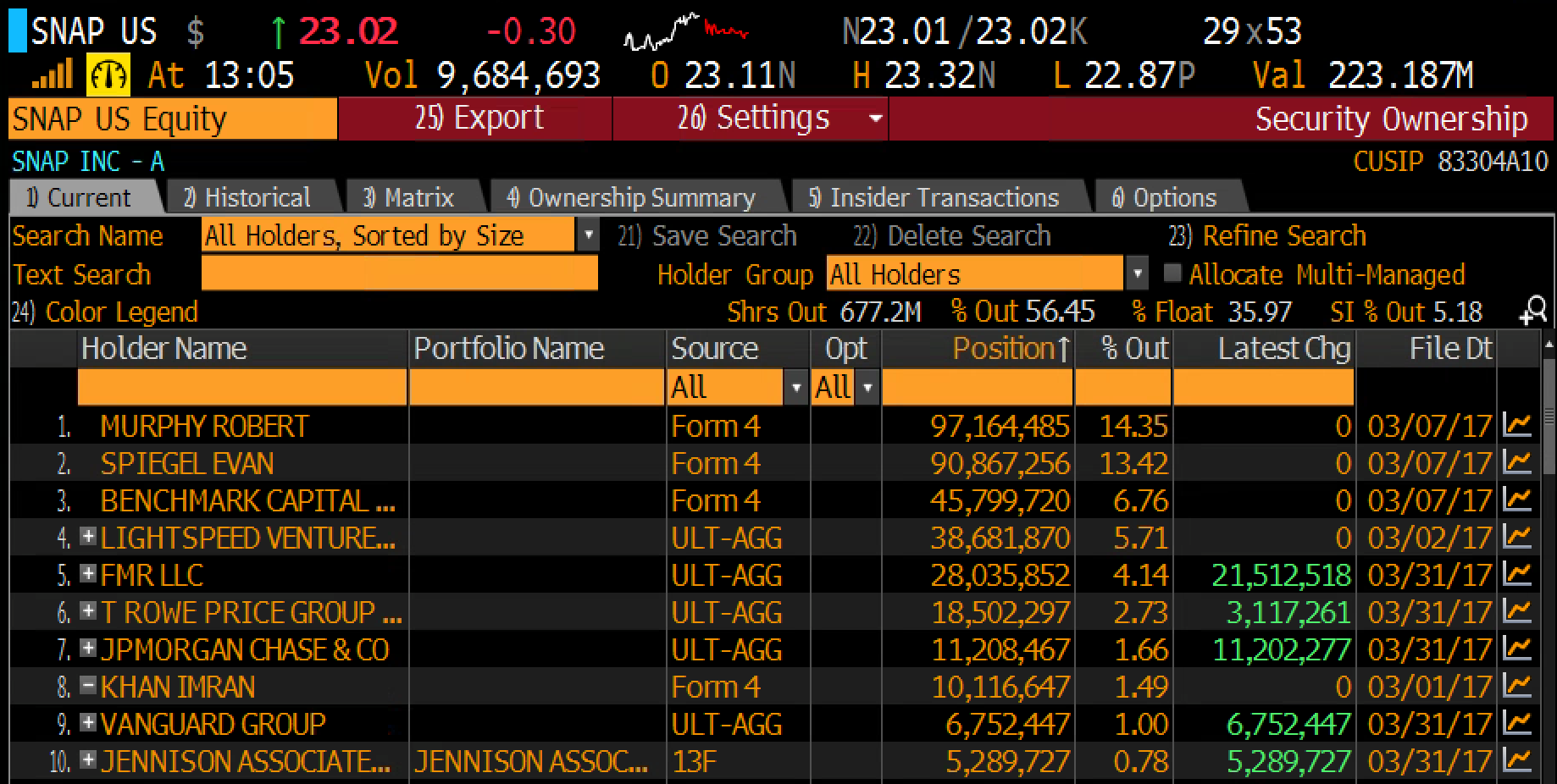 Yeah, I have little doubt that DAU or ARPU miss and squishy guidance will flush out some retail holders who bought after the IPO pop, but the list above is interesting. 30% of the shares outstanding is held by three insiders, nearly 13% by two early venture capital firms, then about 10% from massive mutual fund complexes who will only be net buyers of the stock.  None of this means that the stock can’t go down 10 to 15% tomorrow, it just means the likelihood of it staying down for long, without some massive adverse fundamental change in their business (which is still emerging) is not that great.

On March 10th soon after options were listed in SNAP I was asked by my friends at CNBC’s Options Action to detail a trade idea with options that was a bit forgiving on entry point after the IPO pop (read here). Here was the idea when the stock was in the exact same spot:

Here was the description of the trade idea: 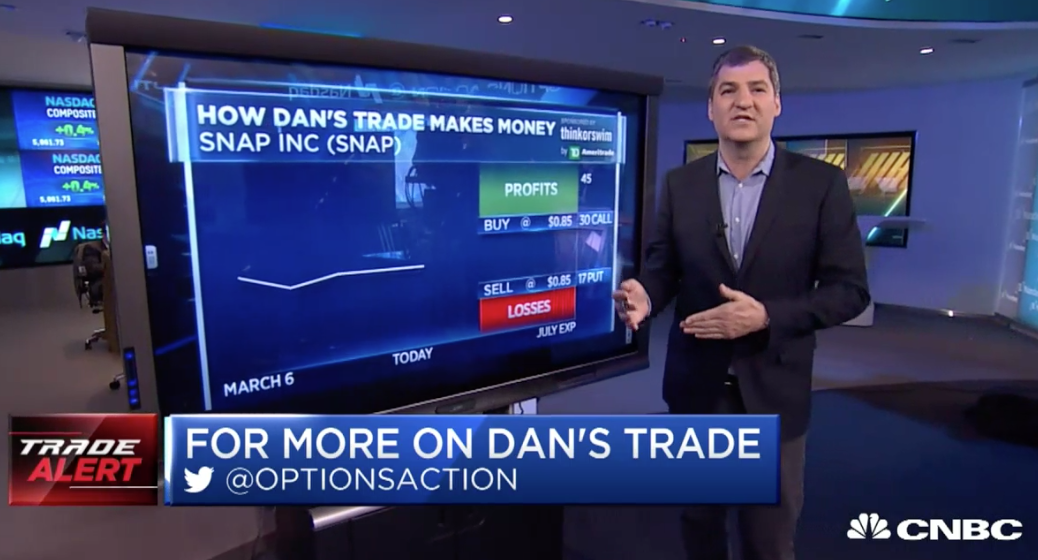 This trade is now a small winner, but it should likely be managed, at the very least the July 17 put that was sold at the time at 85 cents is now offered at 40 cents, sporting about an 11 delta, which is basically saying there is about a 10% probability that option will be in the money on July expiration. While that seems like a decent reason to stay short, the risk does not match the potential reward. Because the July 30 call which could have been bought for 85 cents in the trade idea is now worth only about 50 cents, and the options market is only saying there is a little less than a 20% chance those calls will be in the money on July expiration. It may make sense to roll this view out a bit, keeping the 17 put as the short (as it’s the IPO price) and then looking for a closer to the money call spread. The October 17p vs the October 25/30 call spread is close to even, but I actually like paying for the upside a little bit with the 25/35 call spread vs the 17 put. That costs about .75 but gives a lot of room to run for the stock.

What about those that are long the stock and maybe a bit in the hole or looking to add some leverage to the position? The implied move is about $3 and on the upside that would take the stock to about $26. The 25.50/27 1×2 call spread can be had for about even. If the stock were above 25.50 it’s like having double the shares of stock until 27. Above 27 the stock is called away, but at an effective sale price of 28.50: