The big news in today’s options trading world is that the VIX has fallen below 10. That’s just the 20th time that’s happened since 1990 and it’s the lowest the index has been since February of 2007. The collapse this morning was on relief from the French election but considering the VIX closed with just a 10 handle on Friday, the election didn’t have many investors spooked to begin with.

Obviously we’ve seen implied volatility at low levels before, but I’ve been arguing in this space for a while now that there may be other factors at work on the day to day movement of stocks (realized vol). I’ve seen the VIX near 10 before, usually with a slow and steady march higher mid bull market. But it’s hard for me to recall a period with such long strings of days where the market is essentially unchanged. It’s big news if we see the SPX move more than 10 points in either direction. The Dow moving 200 points seems to be enough for headlines these days. And even in those cases, they seem to be one-offs. merely a one day break from the next long run of days without a move of any significance in either direction. It seems like confluence of  forces bearing down to squash volatility, it’s not like we’ve had a lack of news internationally the past year or so. Those outside factors include historically active (and dovish) central bankers, a move towards passive investing. Both have a measurable effect on less fear in markets.

But from a practical standpoint as old as options themselves, when the VIX is near its historical lows it actually has an effect on realized vol as the gamma of market participants dampens moves in either direction. In plain English, when the VIX is low, delta neutral market participants own a lot of options. And when stocks go higher calls go in the money, and puts go out of the money.  When stocks go lower, puts go in the money and calls go out of the money. So when the market opens up in the morning, there’s stock to be sold against those long calls. And when the market opens lower there’s buyers lurking to buy stocks against their long puts. Moves higher find sellers quickly, moves lower find buyers. Low implied vol lowers already low realized vol. The chicken and the egg can go both ways. Obviously low realized vol causes low implied vol, but low implied vol is also indicative of something affecting the realized vol as well.

Now let’s look at implied and realized over the past 10 years. First, here’s the 10 year chart of the VIX. 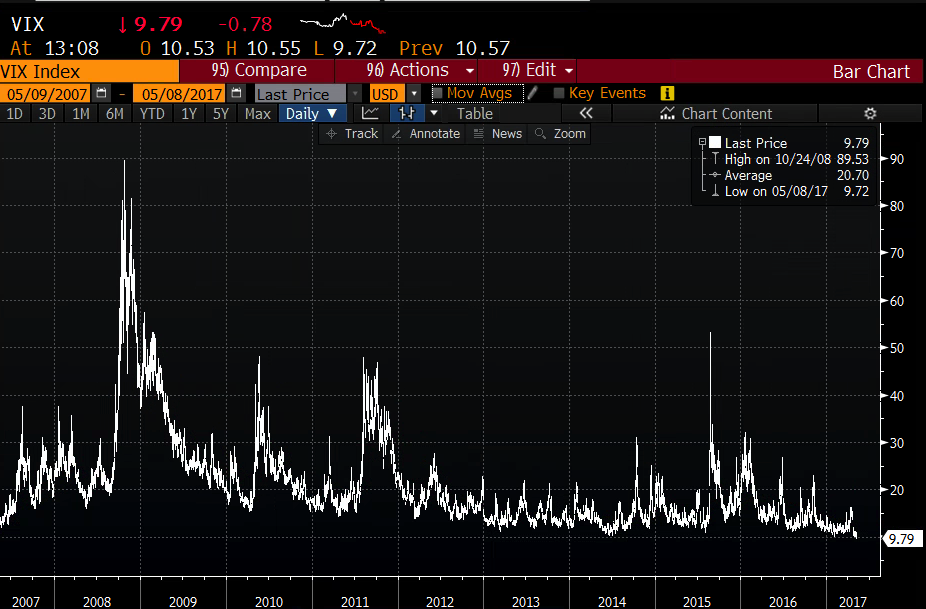 It doesn’t tell us heck of a lot, but as you can see, we really haven’t seen lows this low even during the extended calm of the 2012-2015 period of the bull market. And a lot of headlines will point to the last time it was this low, in 2007 leading into the Financial Crisis. But that’s a coincidence for the most part. There’s no predictive value of what comes after lows in the VIX. IT’s simply indicative of very little going on at the time. Perhaps it’s a sign of complacency. But it’s not like the lower it is, the BIGGER the event that sends vol higher will be. It just doesn’t work that way, no matter how many breathless headlines citing 2007 financial media can spit out.

But let’s now look at the realized vol. Here’s the SPX realized vol (how much it’s moving day to day). Obviously, it’s very similar to the VIX chart: 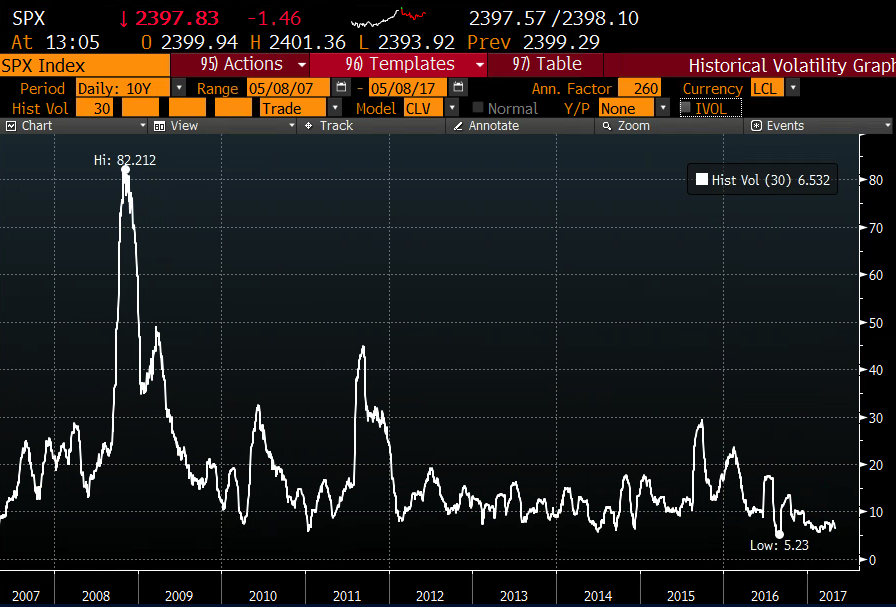 The last time we talked about the VIX in depth the futures were in backwardation. The move was somewhat curious. We discussed how that affected the XIV short vol etf. From April 11th:

the XIV has taken it on the chin the past few days, down about 13%

In the grand scheme of things that’s nothing. The more important thing for short vol strategies is whether we see a follow through on the VIX pop, a VIX above 20 would do some serious damage to the XIV, and that would be compounded by he fact that its for now in backwardation.

That backwardation is temporary, as from May on out the curve is still in contango. But if May futures were to catch a bid, and go into backwardation vs farther out months, XIV would be facing a headwind in the form of daily decay and that could last weeks or worse. So keep an eye on May futures, if the market holds you could see April futures decline and then we’re right back into contango near term, and would remain in contango from May on out. But not only does May capture earnings season, it also captures the French election and who knows what else. Why are the Aprils popping so much more than May at the moment? ¯\_(ツ)_/¯

And in March 30th’s Volatle Compounds I  discussed the best time to buy XIV:

The ideal timing to buy the XIV is following a market selloff where the VIX spikes, the VIX futures go into backwardation (the front month is higher than back month) and backwardation is about to reverse to its normal contango.

We saw that going into and out of the French elections. XIV sold off below 63 during the period of backwardation, and since going back to contango is now approaching 80. Speaking of contango, it’s pretty high at the moment at about 9%. That means that there’s about a 9% difference for the XIV buying back in its near month futures and re-establishing that short in the next month. XIV gains each day on that roll, it’s ugly opposite VXX loses.

And what about those looking to get long vol via VIX futures? Again, there’s nothing about a low VIX that indicates it’s about to go up. It doesn’t work that way. Eventually it will go higher, we know that, but we don’t know when. As usual we’ll check in on zero cost VIX future risk reversals. Right now there are a couple interesting ones in July, both involve selling the 12 put:

or for those looking to be there for a little bit more of a home run:

Again, this is a nice hedge strategy if short vol elsewhere in the portfolio, (long XIV, lot’s of over-writes but little protection type scenarios) and it’s somewhat of a portfolio hedge in general, using long vol as an asset.

As for the XIV itself, again, the best moments for entry are during those periods of backwardation, ideally right as it reverses back to contango.