In case you missed it yesterday, media stocks, including wireless and cable operators, got nailed as investors continue to contemplate the pressure of over the top services, cord cutting vertical integration of content, spectrum and delivery. Yesterday’s price action felt like it might be the start of something as opposed to a capitulation, with stock’s like Viacom breaking key technical support and closing down 7%, Sprint down 11%, Dish Networks and Discovery down 4% and CBS and Disney down a little more than 2%.  We discussed the bloodletting with Craig Moffett, of research house Moffett Nathanson on last night’s Fast Money on CNBC, watch here: 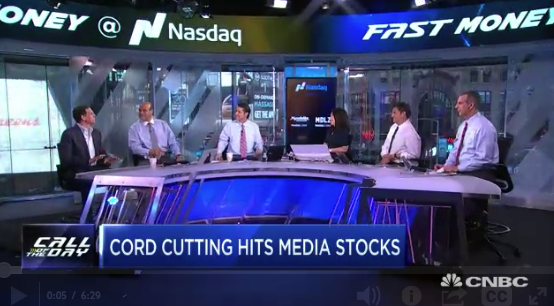 Moffett wrote a research note yesterday on the topic that might have gotten the ball rolling once again: 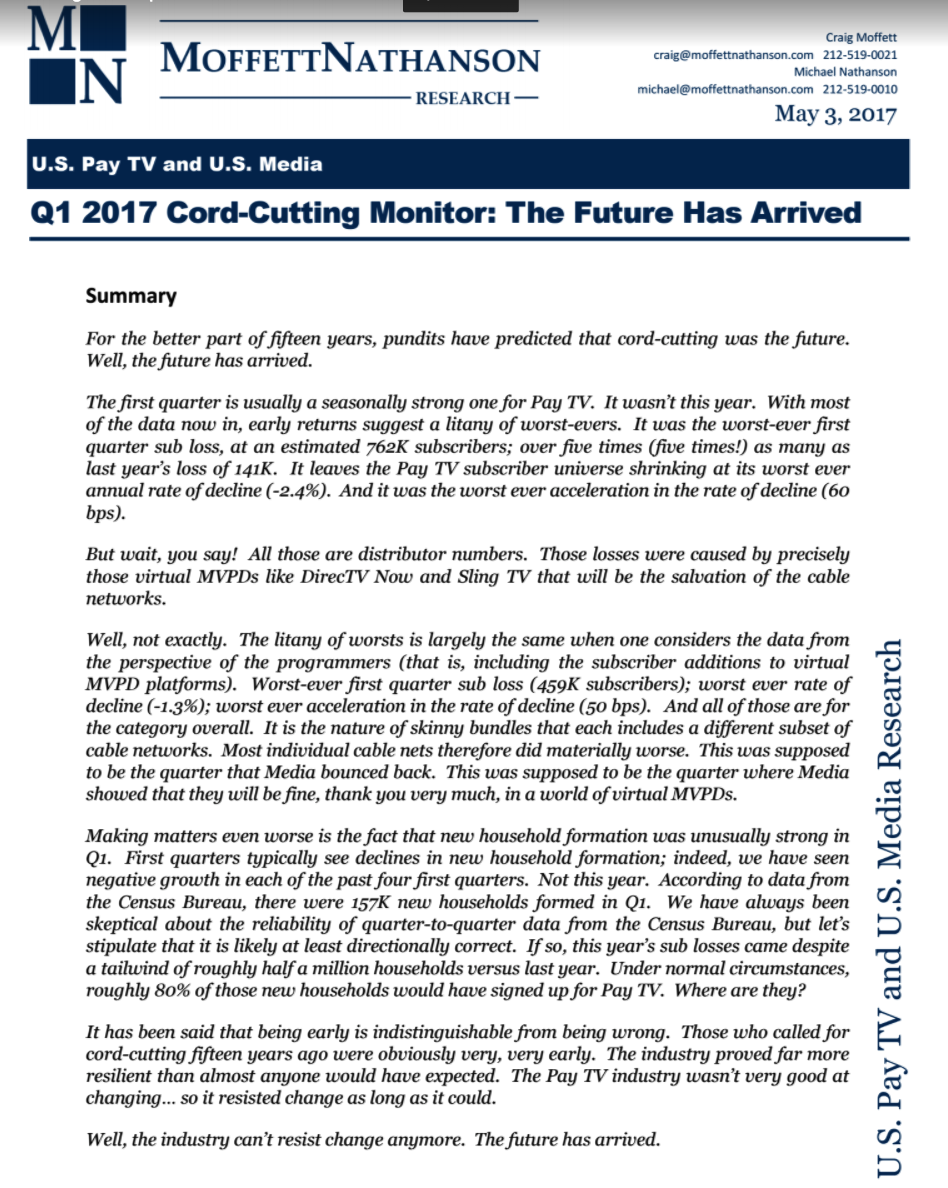 I guess the key point for me was “this was the supposed to be the quarter where Media showed that they will be fine, thank you very much in a world of virtual MVPDs (multichannel video programming distributor). Well I think Craig is pretty clear that the last 6 months or so might have been the calm before the storm.

On May 9th, Disney (DIS) will report their fiscal Q2 results on May 9th after the close. Their commentary on their Media Networks, their largest division will be key for the entire media space. Last quarter losses at ESPN decelerated, but the prospects for a return to growth anytime soon seem dim and a re-acceleration of subscriber losses would certainly cause another leg down.

This past Summer I did a little experiment while my wife and kids were away from the summer, I cut the cord. Dropped off my cable boxes at Time Warner, kept my broadband access, upgraded my Apple TV boxes, bought an Amazon Firestick and loaded up on OTT services. When it was all said and done, subscribing to Sling TV so I could have live streaming TV like news and Sports for $55 a month, HBO Now for $15 a month, HULU for $13 a month, Netflix for $13 a month, Showtime Now for $15 a month I was spending easily as much as my prior cable bill for a patchwork solution., Most importantly, while its nice to be able to access this media on any device from anywhere, I am not a 15 year old kid and generally like to lie on the couch or bed, iPhone in hand and watch Game Of Thrones, House of Cards, The Handmaid’s Tale, Homeland etc etc on as big as screen I can fit on my wall as opposed to as small a screen that will fit in my pocket. Call me old fashioned. But most importantly, to cut the cord and unbundle you rely on the streaming quality of your broadband service, which for most is far inferior to their cable connection (which is the case for me in NYC) and that matters on the big screen. I went back to cable when the family returned in Sept.

Apple has yet to enter this space in a meaningful way other than offering downloads on iTunes through Apple TV. A subscription service is coming, or it better be for their sake, and I suspect it will not a clone of what exists. This will dial up the competition for both original content and distribution given their installed base of over 1 billion iOS devices.

Moffett is clearly right that the future is here, but it’s unclear who the big winners and losers will be. I suspect after a painful period of unbundling there will be re-bundling (possibly in a different form, Maybe AAPL figures out how to bundle the original content from the OTT services, that would be cool) for the reasons I laid out from my own experience which was expensive, disparate and clunky. And the cable providers aren’t taking this lying down, pushing hard to end net neutrality to defend their business models, with a sympathetic ear in the new administration:

FCC Chairman Pai wants to switch ISP rules from proactive restrictions to after-the-fact litigation, which means a lot more leeway for ISPs that don’t particularly want to be treated as impartial utilities connecting people to the internet.

From where I sit, the bigger the losses at DIS’s media networks division and the slower AAPL is to offer a streaming video offering the more attractive of a deal Netflix’s 100 million strong subscriber base will look for those companies. That would be an obvious leapfrog of what might be fury of vertical mergers like the proposed AT&T/Time Warner deal as Comcast could buy T-Mobile and Verizon could buy more content and/or a cable owner like Altice.

The lower these stocks go in the near term the more they’ll have the urge to merge.