A year ago this past week Apple (AAPL) confirmed what most investors had long feared, per Recode:

its second-quarter (F2016) revenue fell to $50.6 billion, down 13 percent from the same period last year. That marks Apple’s first year-over-year revenue decline since 2003 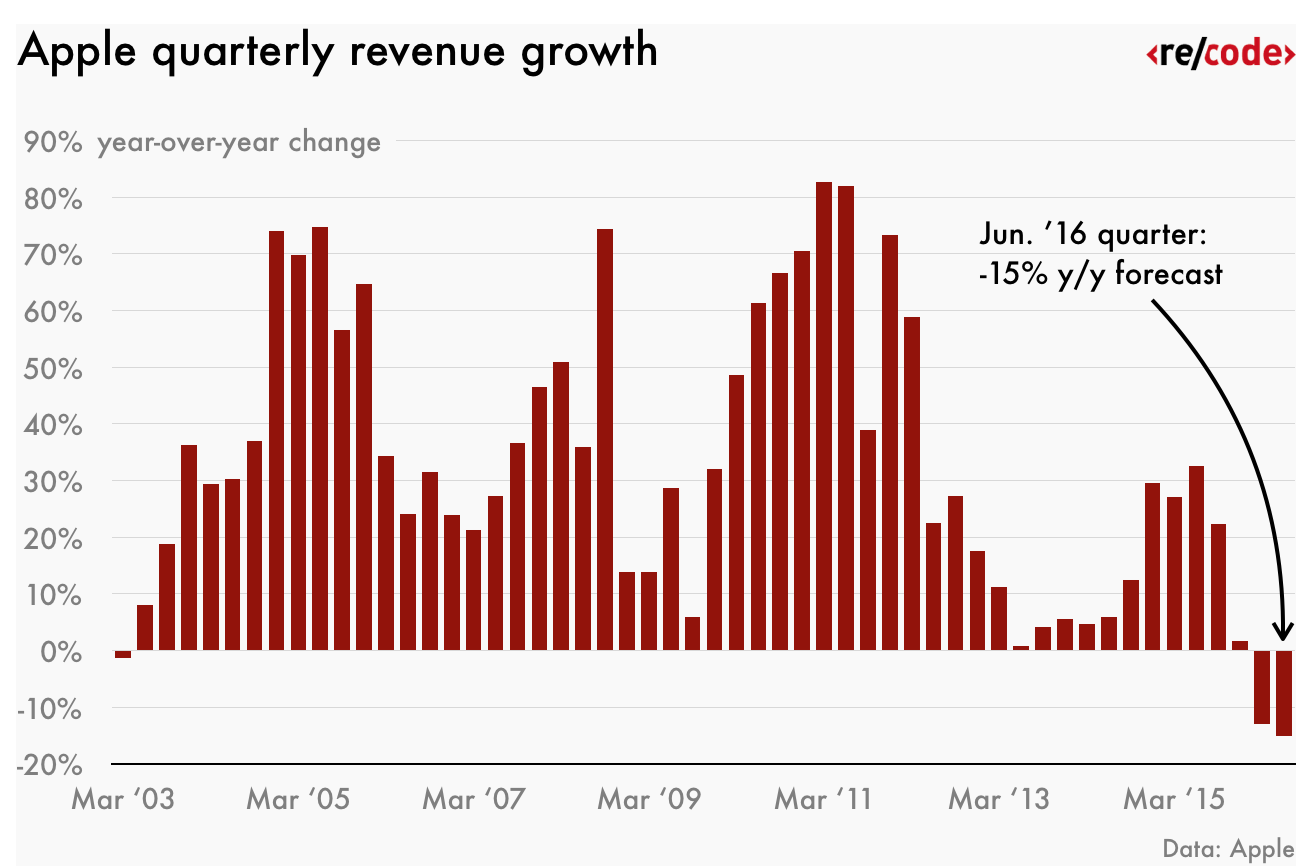 While AAPL’s perceived slowdown in smartphone innovation had something to do with this revenue decline, it was more likely a reflection of the industry’s lowest year over year growth rate (only 2.5% in 2016 per IDC) in 20-16. Many analysts and research firms see that re-accelerating in 2017.

As the realization of a 2016 slowdown became fact, AAPL investors headed for the exits, resulting in a 33% peak to trough decline to June 2016: 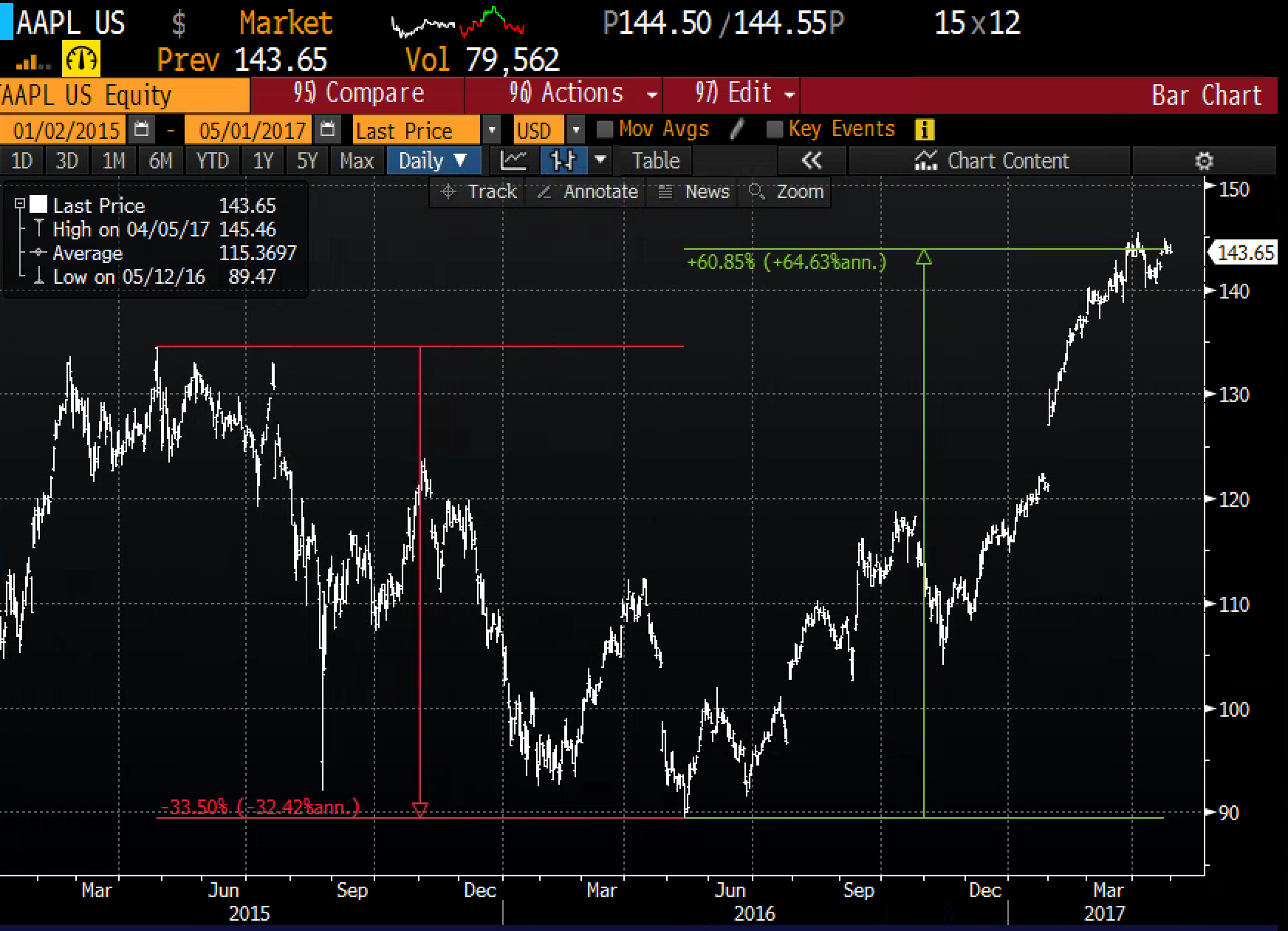 The stock has since rallied 60%, gaining more than $200 billion in market capitalization in anticipation of the 10-year anniversary iPhone, which Wall Street analysts and the financial and tech press had dubbed an Apple’s anniversary “supercycle”.

I suspect that if this impending supercyle comes it will have less to do with whatever new bells and whistles are packed into and on the outside of the phone and more likely a result of tens of millions of iPhone owners with cracked screens and useless batteries trying to hold off as long as possible to make it to the upgrade.  Comscore had the following to say on the topic on April 20th: 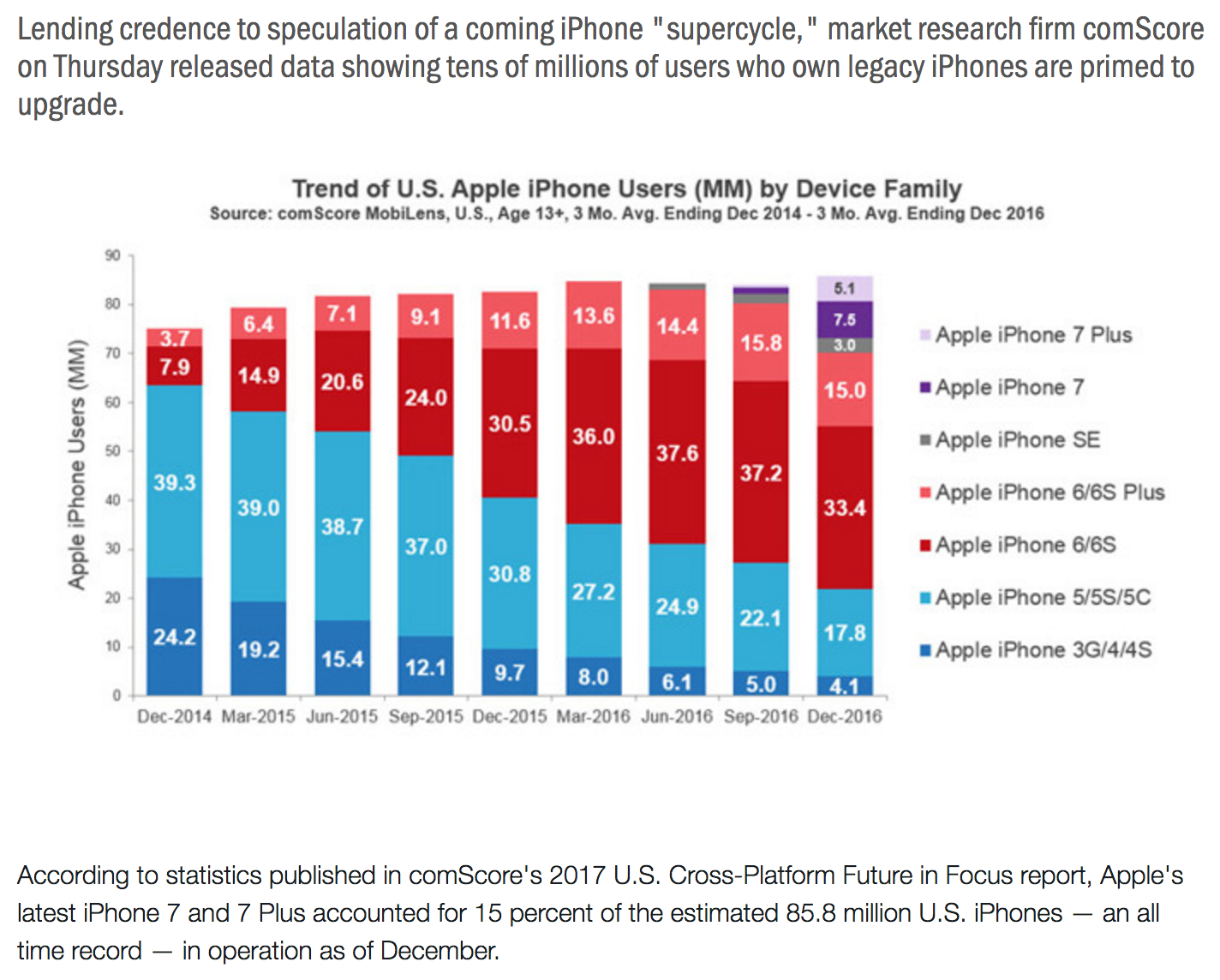 Here’s a big wrinkle, however. In the U.S., smartphone buying has changed completely since 2014. People are now paying full freight for their phones — either $650 or more up front or in monthly installments. Back then, U.S. phone carriers subsidized smartphone prices so many people were lulled into believing a high-end smartphone like the iPhone cost just $200.

Those phone subsidies are essentially gone in the U.S. Whether it’s because phones don’t “cost” $200 anymore, or because the improvements in phone models are more subtle than wow, Americans aren’t buying new smartphones as often. The average length of time between people replacing their smartphones was about 31 months in 2016, up from nearly 25 months in 2014, according to telecom industry consultant Chetan Sharma. If sticker prices for smartphones go up, that may give people one more reason to hold onto their old iPhones for a little longer.

Predictions of a “super cycle” could still pan out even if Americans don’t revert back to 2014 buying patterns. The number of iPhone owners is 79 percent higher than it was in 2014, according to Bernstein Research estimates, which makes a sales lift more likely even if a relatively small percentage of iPhone owners buy a new, pricier model. There are some signs that shoppers in China — Apple’s second-largest market — are eager for new iPhones.

And just this morning the WSJ’s Heard on the street column tried to make the case that “Apple Still Has Room to Grow“:

Apple shares typically rally ahead of an iPhone release. This year will probably be no different. In the three months before Apple launched new or updated iPhones—typically in September or October—the stock has averaged a 20% gain, according to Bespoke Investment Group. Those rallies have tended to fade once the product is released, though. The market buys the rumor and sells the news. Apple shares have averaged a roughly flat performance in the month that follows an iPhone announcement.But with the stock up 24% year to date, and the expectations that iPhone sales will be less than super in the next two-quarters in the lead up to the new phones, near term any and all good news could be in the stock.

AAPL will report their fiscal Q2 results tomorrow after the close. The options market is implying about a 3.25% move in either direction, which is shy to the 5% average one-day post-earnings move over the last 4 quarters. We will be sure to follow-up with a more in-depth preview.