The hope trade is fully intact. For those who thought last week’s mid-teens readings in the VIX was indicating a coming vol shock for stocks, or that oil breaking through the physiologically important $50 level could set off a chain of events in related debts like Q1 2016, or the 10-year treasury yield hitting its lowest level since early November resulting in the flattest yield curve since October would cause bank stocks, at one time the primary beneficiary of the hope trade to retrace the whole move since the election, well you were very wrong.  Last week in this space (Rethinking Reflation) we highlighted the potential disconnect between perception and reality as it relates to economic conditions and financial markets: 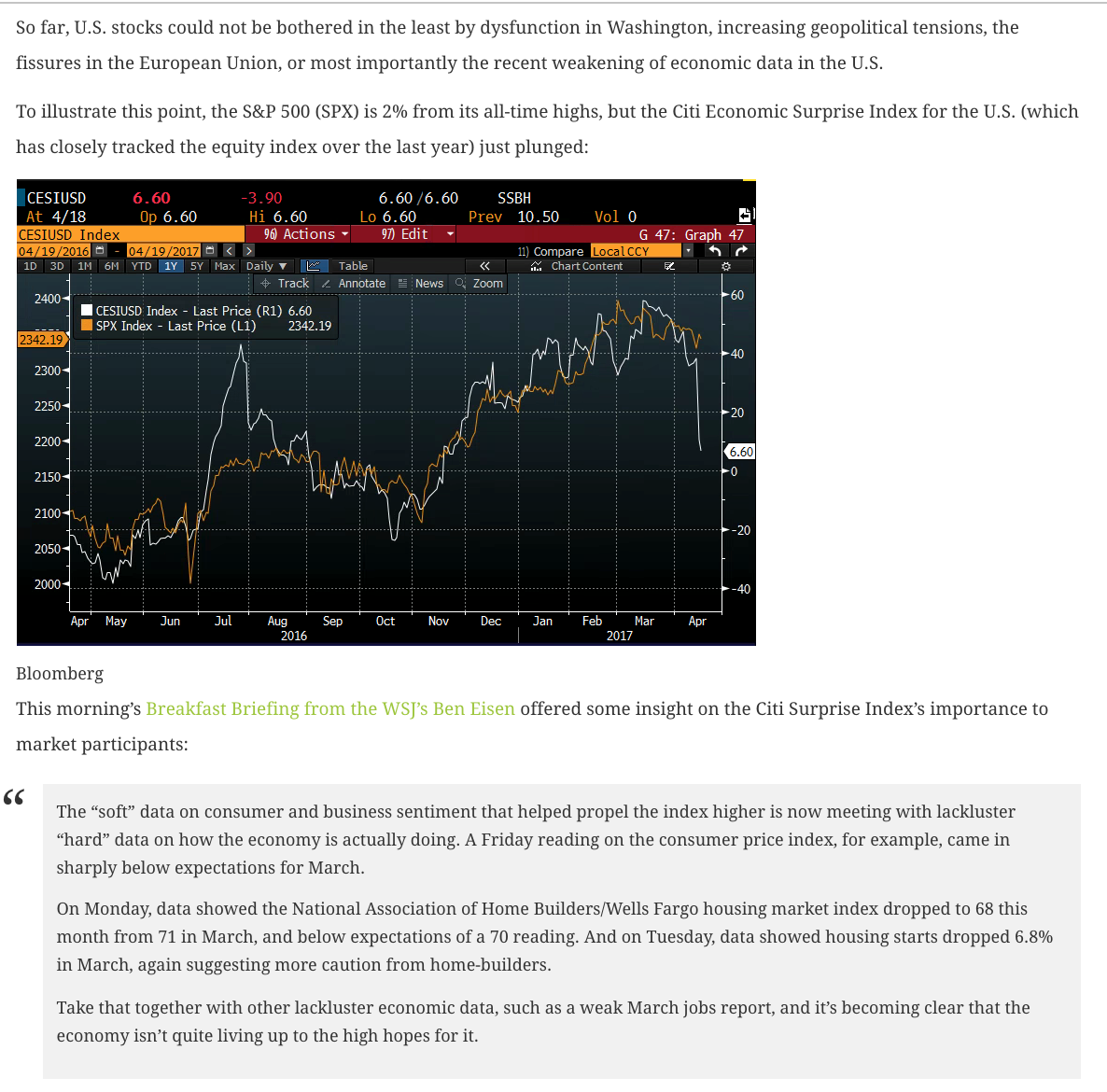 This morning, the WSJ’s Daily Shot highlight’s the same chart, suggesting the “divergence does not look sustainable”. Which by no means suggests that equities are about to take a similar plunge, but that something is likely to give one way or the other. 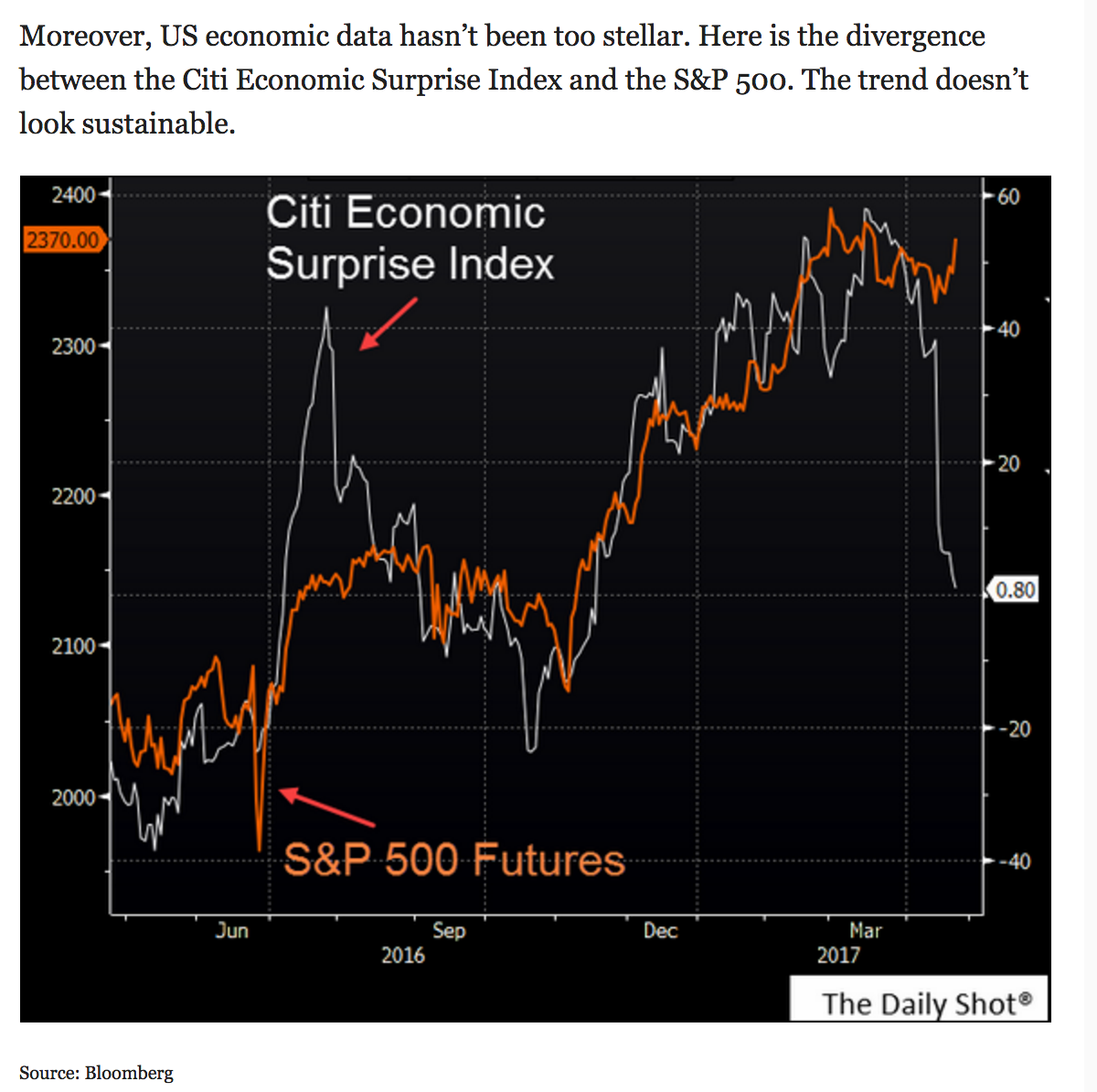 This morning, US stocks are buoyed by seemingly good earnings reports from three Dow Jones components, Caterpillar (CAT), McDonald’s (MCD) and MMM. The final nail in the coffin for new all time highs could come Friday morning, the day after Alphabet (GOOGL), Amazon (AMZN) and Microsoft (MSFT) report March quarter earnings, nearly $1.5 trillion in market cap. If all were to beat and their stocks were to rise, to state the obvious, breakout city.

Despite spot VIX nearing a hat size, the WSJ’s Ben Eisen suggests Investors are Leery of Another Market Shock:

What has investors on edge? Tail risks.

That’s the term typically used to describe low-probability events with the potential to deliver major market moves. Between the British vote to leave the European Union and the surprise election of Donald Trump as U.S. president, there’s been no shortage of recent examples. Now, investors don’t want to get caught unprepared.

The fear of tail risks stands in contrast to low readings on some measures of volatility, such as the CBOE Volatility Index, or VIX, which has remained consistently below its long-term average in 2017. While the VIX measures implied stock market swings over the following 30 days, tail risks delineate the kind of risks that come around less often but have an outsized impact on the market.

It’s tough to measure the extent of investor desire for such protection, but one such gauge is the CBOE SKEW index, which tracks the price of options that pay off in the event of big market moves in either direction. It hit a record high last month and has lingered near those levels since, marking its fifth-highest reading ever on Friday ahead of the first round of the French presidential election.

By definition, tail risks are low probability events, and happen when people least expect them. Big money is always looking for dollar cheap ways to protect against unlikely or unknown events, so it makes sense that the SKEW index would hit a relative high between known events, and when vol is particularly low.

From my experience it makes more sense to track these movements when there are few catalysts on the horizon and complacency seems to reign supreme. Except for the slight pop in vol into the French election, investors seem complacent to risk at the moment. And as always it feels as if market participants and pundits are spending most of our time talking about what could go wrong. There’d be little else to talk about otherwise. And that leads me to believe any tail risk is likely to occur from a lurking black swan as opposed to something right in front of our faces.