On Options Action April 21st, Carter Worth outlined a bullish technical thesis on McDonald’s, which is already up nearly 10% this year and trading at all-time highs despite revenue and earnings declines over the past couple years. Dan Nathan rightly pointed out that chasing high-flying stocks at valuations that are higher than normal going into catalysts such as earnings, which they are due to report April 25th, can be a risky enterprise. Recognizing that risk I suggested buying the September 135 calls for $3.40 may be a lower risk way to bet that the remarkable recent performance may continue over the next several months. Here is the segment: 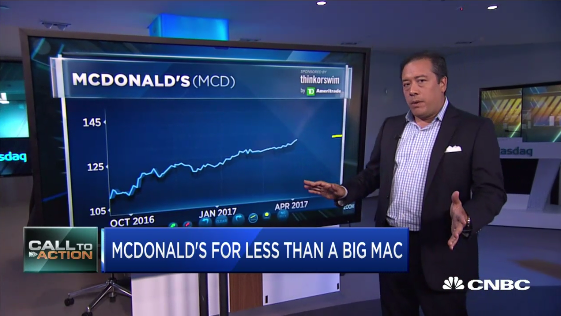 Unfortunately, the show rarely permits us the time to delve deeply into the underlying business fundamentals, so I hope to offer a bit more of a backdrop here.

McDonald’s Corporation franchises and operates fast-food restaurants in the global restaurant industry. The Company’s restaurants serve a variety of value-priced menu products in countries around the world. McDonald’s has more than 36,500 restaurants serving burgers and fries in about 120 countries. (There are more than 14,250 Golden Arches locations in the US.) The popular chain is well-known for its Big Macs, Quarter Pounders, and Chicken McNuggets. Most of the outlets are free-standing units offering dine-in and drive-through service, but McDonald’s also has many eateries located in airports, retail areas, and other high-traffic locations. More than 80% of the restaurants are run by franchisees or affiliates. (Source: Hoover’s Inc., a Dun & Bradstreet Company)

McDonald’s is arguably the most successful and best known fast-food restaurant franchise company in the world. Although not all of the company’s restaurants are franchises, it was the original source of the company’s growth, and the company has recently emphasized that they are focusing on re-franchising 4,000 company-operated stores by 2018, at which point they will be roughly 93% franchised. They are also selling a number of company-owned locations internationally to “DLs” (Developmental Licensees). Ultimately the long-term goal is 95% franchised up from 84.6% as of December 31st, 2016.

When examining the financial statements of companies like McDonald’s we must first differentiate between how company-owned and franchise store revenues appear on corporate financial statements. Corporate store revenues are simply gross sales, however franchise store revenues are gross rents and royalties. To illustrate this we’ll use a hypothetical store location that generates $2 million USD annually. For a company-owned store, it’s easy, $2m in appears on the revenue line. However, a franchise is an independently owned and operated business. The owner of the franchise restaurant pays fees to McDonald’s, typically a 5% royalty and rent which might be in the range of 12.5% to 15% of gross revenues. Even rounding up the rent estimate in this example the franchise restaurant would pay McDonald’s 20% of $2m in revenues in rents and royalties, so that would represent $400,000 in revenues on McDonald’s financial statements.

This is important to remember because the re-franchising effort decreases reported revenues even if gross sales overall remain the same. Thus some of the recent revenue declines are attributable to this. Additionally, using some simple arithmetic, we see that reported revenues are likely to decline significantly in the near future if the company meets their re-franchising goals. The company reported revenues of 15.295 billion from 5,669 company-operated stores as of December 31st, 2016, if 4,000 of those generated say ~ 10.8 billion. Simply converting that to franchise sales would reduce reported revenues by ~ 8.64b, even if total sales at all McDonald’s stores remain unchanged. (Bear in mind that this is simply back-of-the-napkin estimates here.)

Whether or not re-franchising makes sense from a financial point of view might be more nuanced than simply examining the estimated profits to McDonald’s from any given dollar of sales. As an example consider fast-food wages. Recently, particularly in big coastal cities such as New York, Los Angeles, San Francisco and Seattle, there has been a big push to raise minimum wages. Not only can that affect margins in a general sense if customers are unwilling to accept price increases sufficient to make up larger wage expense, but lawmakers do not treat all businesses equally. A large corporation like McDonald’s might be expected to impose higher minimum wages more quickly than a small business owner-operator would be compelled to. In theory, McDonald’s could benefit from higher-prices resulting from mandatory wage increases because they collect a percentage of revenues from franchise stores. Thus in the bizarre world of legislative unintended consequences, this structural repositioning could benefit McDonald’s shareholders on a relative basis, even if these regulation reduce profits overall for the stores. It could be that this operational shift is an attempt to push anticipated regulatory burdens to owner-operators while garnering potential revenue increases at the corporate level. Although exact statistics are hard to come by, what is available suggests the average wages for line workers at company-owned stores is higher than at franchised stores. If that’s true, the threat of higher minimum wages might strangely have the short-term impact of reducing wages for some McDonald’s restaurant workers. Shifting those concerns to restaurant workers, politicians and economists and away from McDonald’s shareholders alone likely justifies a slightly higher multiple.

This is but one of several initiatives central management’s strategy to return the company to growth. The company is also on a multi-year plan to reduce G&A expenses by $500 million per year, successfully reduced by $200 million per year already. Returning cash to shareholders in the form of dividends and share repurchases has likely contributed to the stock’s strength. Improving their products and services to return to overall operating growth may be the most basic and important ingredient going forward.

The early success in this area was the introduction of “All Day Breakfast”. More recently the company announced plans to win back customers attracted to more up-market or “gourmet” type burgers offered by the likes of Shake Shack, In-and-Out, P Terry’s and even conventional competitors such as Wendy’s and Burger King, by offering larger, freshly-cooked burgers from never-frozen beef. The company has even attempted to take on Starbucks and Dunkin-Donuts with their McCafe coffee offerings. Meanwhile they are considering ways to leverage their location and cost advantages to offer delivery services, and improving online/electronic ordering and payments mechanisms. For these reasons when examining their business I think it is key to focus on secular industry trends impacting overall sales, not their “revenues” specifically, their net income trends, and operational and capital structure strategies going forward.

If recent history is any guide Dan’s skepticism remains warranted simply by looking at net income regardless of accounting semantics on the revenue line. Net income has also fallen ~ 17% even as the value of the business has increased as the graph below illustrates. 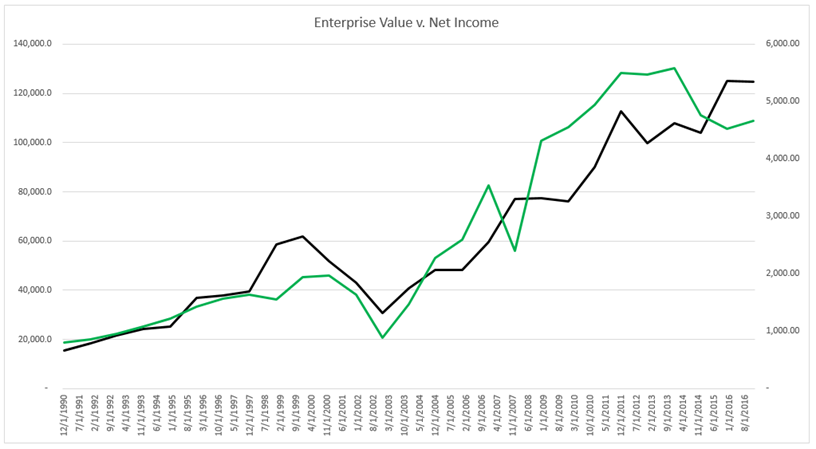 One of the reasons I graphed the enterprise value, rather than the market cap, is that corporate management has emphasized the return of cash to shareholders in recent years, $3b in the form of dividends, $11b in the form of share repurchases, much of which has come from increases in corporate debt. To put things in perspective net cash has fallen by more than half since 2013, while debt levels have increased over 80% from ~ $14 billion to ~ $26 billion. Some will criticize this type of activity as a form of “financial engineering” or suggest that more levered businesses are more vulnerable. Regardless some institutional investors, particularly faster-money activist types often favor this type of quick boost to share prices. This alone could justify using options to make bullish bets because as a company becomes more levered the equity will tend to become more volatile, all else equal.

Whether McDonald’s can truly challenge recent upstart competitors remains an open question, but from an operational perspective, management is doing the right things to boost the share price; which is their fiduciary responsibility after all.

Mike is the co-author of The Options Edge: An Intuitive Approach to Generating Consistent Profits for the Novice to the Experienced Practitioner