A few weeks ago on CNBC’s Fast Money, I was asked to offer up a hedging / protection strategy for holders of outperforming mega-cap tech stocks. The idea was simple, the QQQ, the etf that tracks the Nasdaq 100 (NDX) is dominated by a handful of stocks, and thus if invrstors head for the door at the same point in time, we could have a flush, from April 3rd: 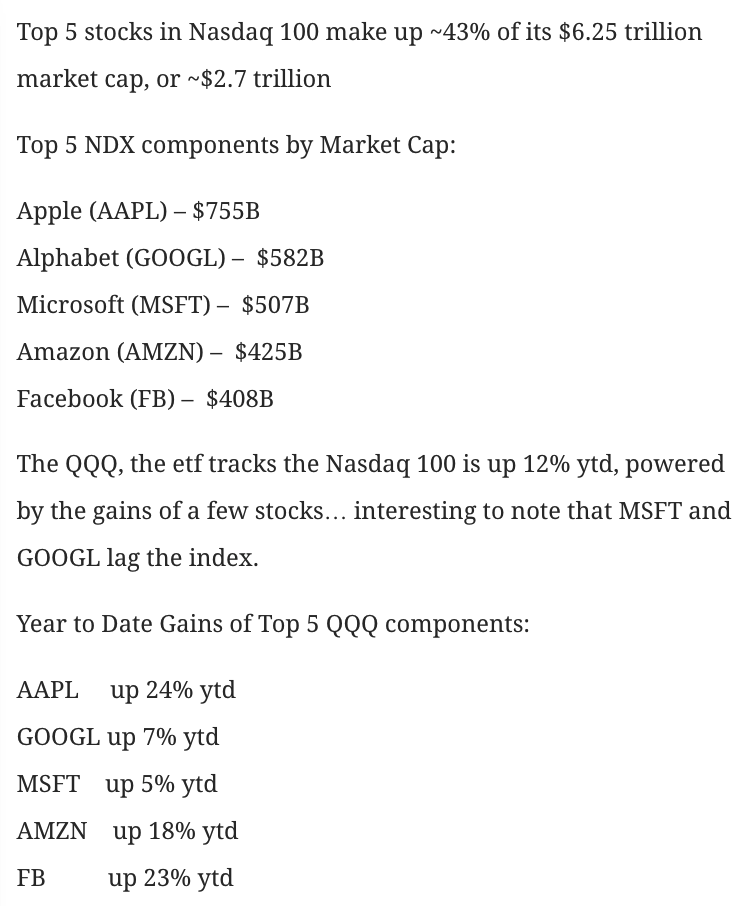 Not much has changed since then, as the QQQ is in nearly the exact same spot, but I am being asked to refresh this strategy for tonight’s Options Action program on CNBC as we will start to get the results of many of these components next week.

Alphabet (GOOGL), Amazon (AMZN) and Microsoft (MSFT) will all report their March quarters Thursday, April 27th after the close. These tree stock’s make up nearly 25% of the weight of the QQQ and represents $1.5 trillion in market capitalization. The options market expects them to move all to move between 3.5% and 4.25% in either direction. These could obviously counter-balance one another, or work together or against the broad market if they were to act in concert with one another or greatly outperform the implied movement.

While we like to refer to these three companies as ‘tech’ I think it is important to remember that aside from AMZN’s growing AWS business, which is maybe 15% of their total sales, and a disproportionate amount of their profitability, they are a retail company. GOOGL is still largely in the advertising business. MSFT is the only one of the three who lives and dies by enterprise tech spending. In the post-dotcom era, tech companies have very different meanings than they did the age of the PC.

Rounding out the big five in the NDX, the week after next, we will get March qtr earnings from Apple (AAPL) on May 2nd, Facebook (FB) on May 3rd, $1.2 trillion in combined market cap… so 40% of the QQQ in the next 2 weeks, in just 5 stocks.

Aside from the concentration in the NDX, the WSJ reported the other day that through Mid April that these ‘tech stocks’ are making their presence felt in the SPX:

Combined, shares of these three companies (AAPL, AMZN & FB) account for almost one-third of the S&P 500’s 2017 advance through this past Wednesday.

So I am not reiterating this call for emphasis from April 3rd, but I am updating the view in front of what might be an important couple weeks, with the French elections this weekend (and likely May 7th), a Fed meeting on May 3rd and the likelihood of continued shenanigans in Washington as we get to next week’s budget showdown and the President’s first 100 day mark which will be a motivating factor for any signs of concrete steps towards his agenda, and those moves could be concretely defeated if the Republican congress once again has holdouts, both right and center.

A tactical portfolio hedge over the next few months:

To my eye, there remains an air pocket below $130 in the QQQ down to about $120, the December breakout level: