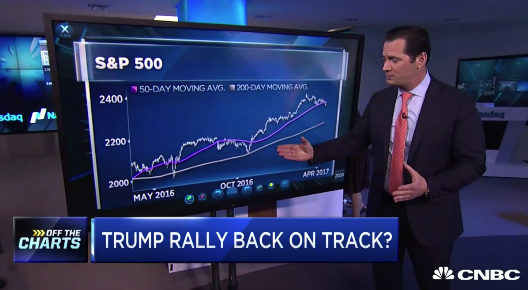 To Rich’s eye, he sees another leg higher after the recent consolidation of the post-election gains. That is his technical view. Regular readers know that we do not subscribe to merely one input to make a decision on the direction of a risk asset, but the amalgamation of a handful, like fundamentals, positioning/ sentiment, and catalysts to name (just a few).

I think there is little doubt that prior to the election, fundamentals for economic growth were improving here in the U.S. as we saw slight upticks in job gains and inflation. But investor sentiment was poor as the political season was taking its toll, and it the consensus trade was the opposite of what happened in the election.

Yesterday the SPX closed exactly 200 points above its close of 2139 on election day (about 9%). It’s been my opinion (and many other market participants) that most of these gains are the results of the promise of a same party president and super majority in congress following through on pro-growth/business campaign rhetoric. Market sentiment shifted quickly towards this view after the initial shock of the election.

But as Ross pointed out, the panic in other risk assets over the last few weeks started when it appeared the White House’s domestic legislative agenda could be in shambles. He cites gold, rates industrial commodities etc, but points out that U.S. stocks, specifically large caps, barely moved and simply consolidated. And that that consolidation could lead to another leg higher.

But to my mind, the potential looming budget fight at month end, the inability to got any momentum on health care, means a massive discount on tax cuts and infrastructure spending (which is largely also tax breaks) in the near future. And in the meantime we have geo-political flareups overseas. All that sets up for a surprise vol shock in U.S. stocks. To my untrained eye, I see a reversal of most if not all of the post-election gains back to, at least the December breakout to new highs, and maybe back to 2139… but only IF we continue to get push out of the pro business policies that the market has assumed and would certainly stimulate near-term growth (longer term ramifications are a different story):

Back on Feb 17th when the SPY was basically right where it is now we detailed a defined risk bearish trade and or hedge in May expiration (read here). With two months passed, this position has lost a little less than a third of its value, but for all intents and purposes, with one month to expiration, and no shortage of catalysts (including Q1 earnings season which is underway) this position has held up fairly well and allows for a roll.

We frequently make the case when detailing hedging strategies that these are not to be done too frequently, but tactically, as they can be a massive drag on returns, but with vol still low and a lot on the calendar here and abroad it makes sense for those protecting post election gains and not wanting to profit take entirely.