Last night on CNBC’s Fast Money I took a quick look at the implied movement in the options market for Bank Of America (BAC) and Goldman Sachs (GS) following their Q1 earnings reports this morning, watch here: 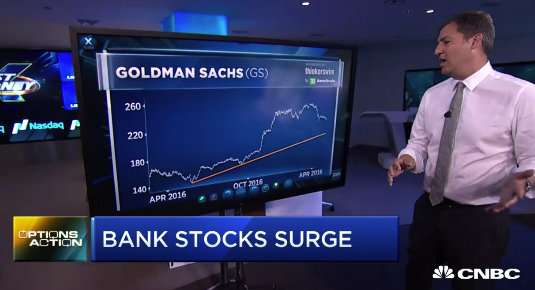 I concluded by detailing both the 6-month and 1-year charts of the XLF (the Financial Sector Select etf) and GS.

Goldman, as a best of breed investment bank, and at its recent highs a massive outperformer since the November election is the one I want to focus on today. The results have clearly disappointed investors this morning. The stock is down 4.25% as I write, well above the 2.5% implied move, and 3x more than its average post earnings movement over the last four quarters. Refreshing the 1yr chart view, this morning’s gap places it at a new 2017 low, down nearly 10% on the year, down about 15% from its 52-week and all-time highs made on March 1st. To my eye, the next real support is near the 200-day moving average (yellow line), just above $200, the level the stock made a beeline for in the couple days following the election:

Taking a longer term view, incorporating the pre-financial crisis all time high, GS may have put in a massive double top near $250, and the $200 level could represent nearly a 50% retracement from its 2016 double bottom. Oh and this may sound overly pessimistic, but its worth keeping an eye on that long-term uptrend from its 2008 lows, which brings you to $150 on the downside which would should serve as staunch technical support on a wide market selloff (barring another financial crisis):

It’s worth noting that my last comment in that clip was that if GS were to hold $220 today post earnings it might serve as a good entry for longs. Regular readers know that I write here because I wish I had more time to explain there. The stock did not hold that near-term technical support because it had bad fundamental news, confirming the weak price action since its highs on March 1st. With little support until $203ish, and no opportunities for the fundamental narrative to change (barring some sort of surprise tax or regulation policy changes) there is little reason to try to catch a falling knife yet.

I guess the main point here, was that I was thinking about JP Morgan’s (JPM) reaction to its results on Thursday, by most accounts a fairly good quarter and outlook, and after opening up, the stock closed down on the day, only to recoup those losses yesterday. Without sounding defensive, if GS had done the same today after decent to good results/guidance than it might have been worth a shot on the long side. That’s clearly not the case any longer and cation is in order.