Netflix (NFLX) will report Q1 results tonight after the close. The options market is implying about a 7.5% one-day move tomorrow (weekly at the money straddle offered at about 8.25%, most of which is for earnings move), which is well shy of the 12% average over the last four quarters, and its 10-year average one day post earnings move of 13%.

There is not much anyone can add at this point about the stock’s performance over the last couple years, up 18% already year to date, having consolidated for months now making periodic new all-time highs, and up a whopping 70% from its 52-week lows made in June 2016. To my eye there is no real technical resistance aside from the prior high made earlier in the month, mild support at $140 and healthy near-term support down about 10% at $130: 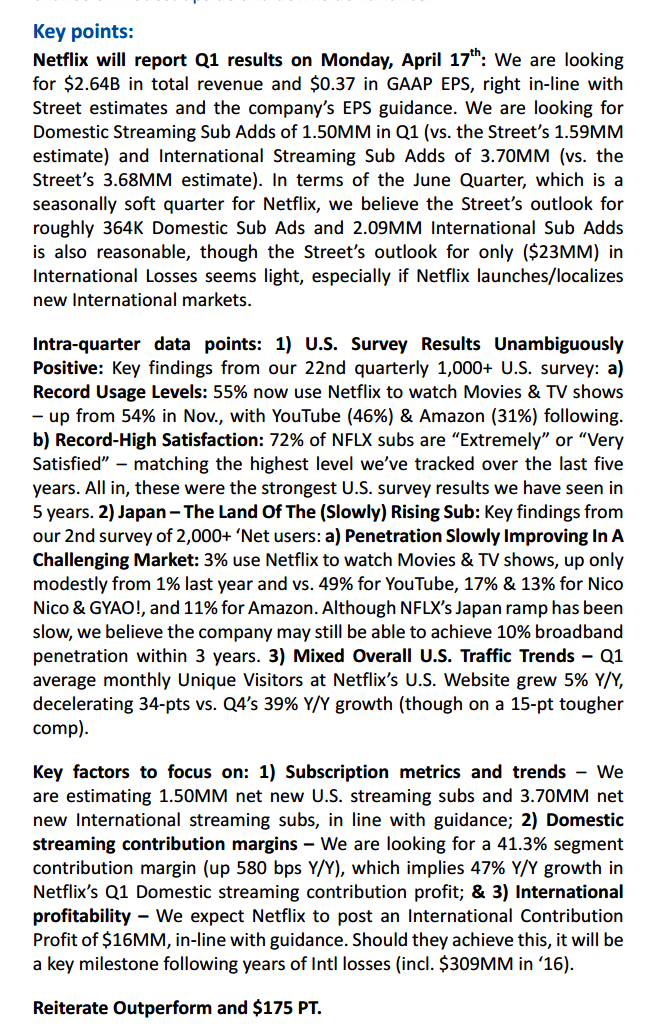 Back on March 10th we detailed a stock replacement strategy for existing NFLX longs, or merely a defined risk long-biased strategy for those targeting Q1 earnings when the stock was $141:

If I were long stock, but inclined to better define risk on the position, or a portion of it, while maintaining exposure into the next earnings I would look to define my risk, with exposure if the stock goes higher but limited risk of the consolidation gives way to a sharp decline.

With the stock near $146, this call spread is trading around $6.50, risking $6.50 to make up to $13.50 if the stock were to rise to $165 or above in the next month.  But just hours before earnings, which is the event most likely to cause a 10% move higher or lower, is that it is now in the money and somewhat binary. The good thing is it’s still defining risk. This week’s implied move is nearly 12., this offers a payout in line with the stock to the upside while only risking about half the implied move to the downside. As a stock alternative this still works. The worst thing that could happen is a slight move lower where this entire trade becomes out of the money, but if that’s the case a roll after earnings would make sense.

What if you’re long the stock, looking for more upside but a little nervous going into this event? One way to hold onto the stock is with a cheap put spread collar, costing about a dollar:

This hedge does not risk being called away in the stock unless there’s a move in excess of $20, above 165. On the flip side, on a move lower (that is beyond the implied move) there is complete protection against 100 shares of stock from 135 down to zero. All of this costs less than 1% in the underlying. This is a great way to protect profits against disaster while allowing significant upside on the event. The most likely scenario is losing the cost of the hedge of the stock is between 135 and 165. The ideal situation is a gap higher towards 165 but not significantly above. The hedge expires on Friday so it is simply isolating the event itself.