No matter how people voted in November, I suspect we all will be finding some common ground in the coming months with dissatisfaction about Washington (and concern about what appears to be growing tensions in hotspots abroad). Since the collapse of repeal and replace Obamacare legislation, we’ve seen the economic agenda come to a screeching halt, as it was the key to much of what was to come after. And since then we’ve seen a foray into geopolitics, which is unfolding on multiple fronts, and teases a bit more interventionist policy abroad. As well signs of a shift within the West Wing itself of which advisors are really shaping policy. These pivots are doing little to assuage the conservatives in Congress who stalled the domestic agenda (on health care and possibly soon on the budget) while constant skirmishes abroad may betray the ‘America First’ populist message that so resonated with certain voters. It’s possible the constituencies dependent for a new President to push through an agenda shrink in both number and size.

Which brings me to Mike Allen’s (one of the founders of Axios) morning newsletter. It looked at the high expectations on the economic front that we say going into and out of the vote from voters who bought into some of the more populist promises of the campaign. Of note, Allen highlights what might prove to be irrational economic exuberance of Wisconsin residents based on their November vote: 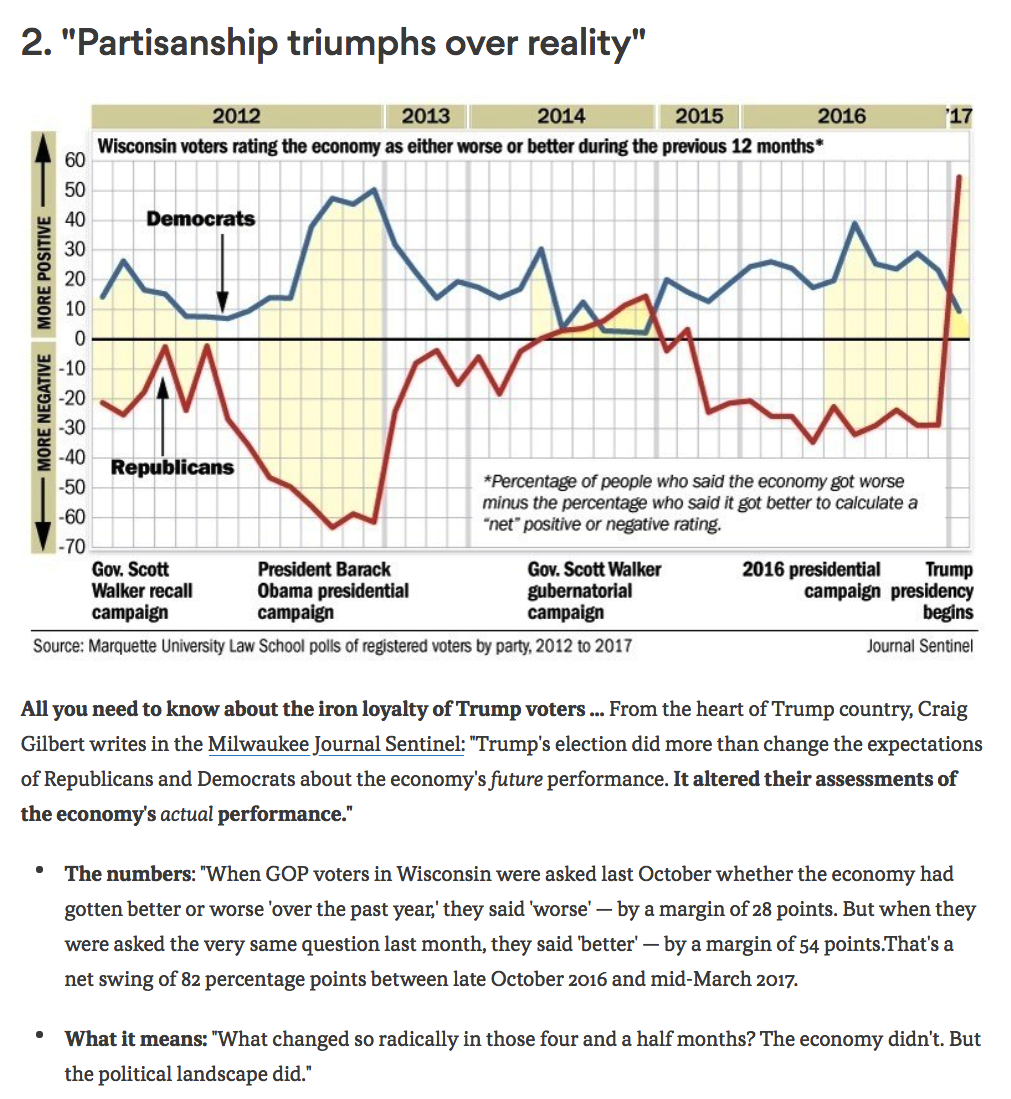 Wisconsin was one of the most hotly contested ‘Swing States’ in the election, Trump who lost the popular vote nationally by nearly 3 million votes, but did disproportionately well (to polling) in places like Wisconsin.

And that disconnect between how voters see the economy can play out in odd ways. We saw enthusiasm in markets and consumer/business confidence spike in the months after the election. But there has been very little evidence of any of that in the economy itself. And while the stock market quietly tripled in the past 8 years, there’s probably been more hype about the 12% rally in the market since November.

This sort of reality distortion field can be tough to sustain.

As we head into Q1 reporting season, we now have a backdrop of weakening economic data and uncertainty about the proposed pro-growth initiatives like tax cuts and infrastructure spending. And now with geopolitical uncertainty, we could see consumer and corporate confidence readings plummet in the months to come.