In early March we gave some thoughts on the retail sector, then in late March followed with this: 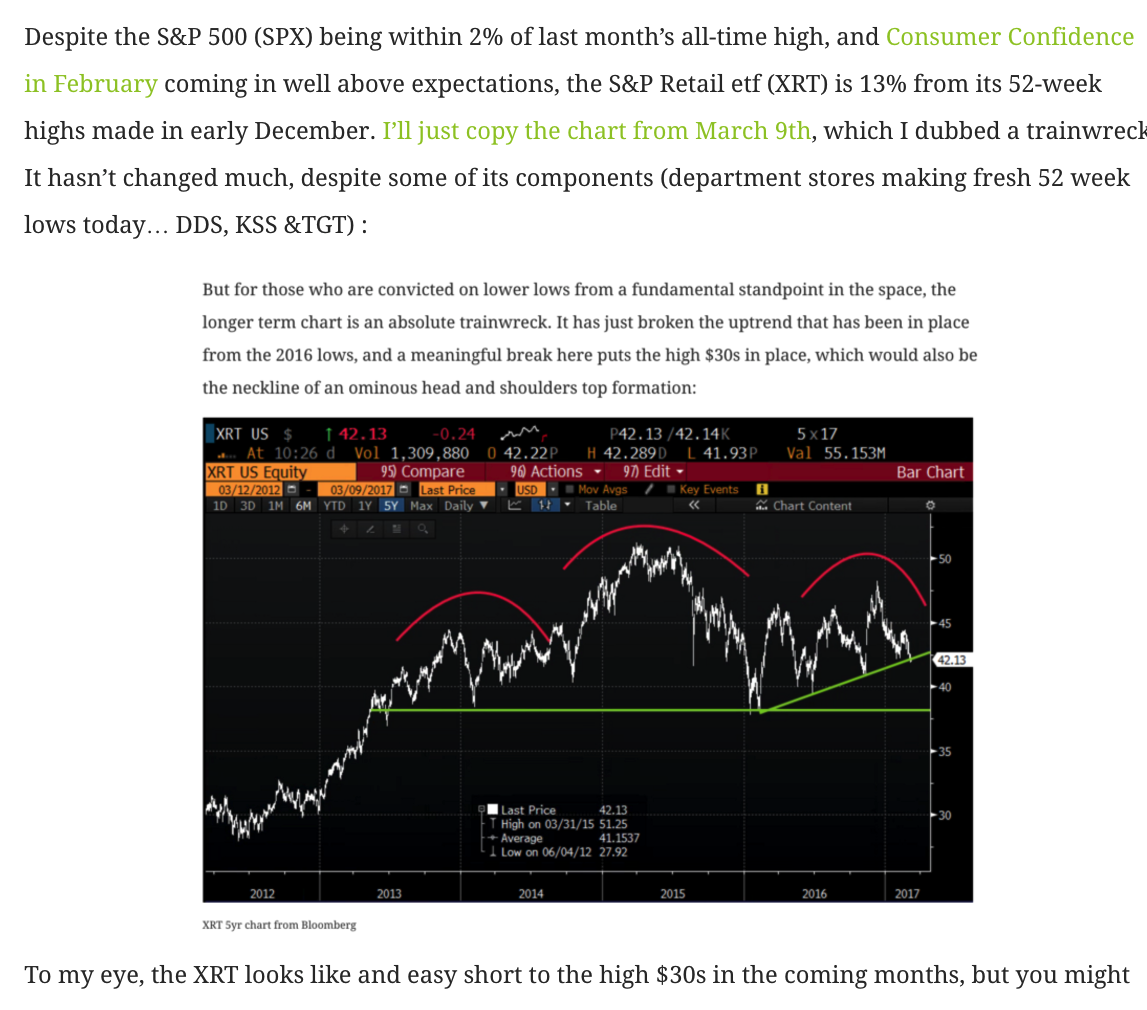 In a nutshell, my disdain for retail stocks in March has not subsided in April and the ever so slight bounce might offer a decent entry for a defined risk short playing for a retest of $40 in the near-term:

Which might put the high to mid $30s in play as we get to the bulk of retail earnings in May/June:

Earnings season (which starts this week), the potential for a government shutdown over the budget later in the month, not to mention increasing fears of geopolitical risks, the French elections and more slowdowns of any legislative agendas on tax cuts (or if tax cuts come with a border adjustment tax), all could put pressure on consumer confidence & spending. And with that, if we get cautious forward guidance, and dramatic cost cutting initiatives in the retail space, investors could be spooked once again. The bulk of retail earnings will come in May, days and weeks after Amazon (AMZN) will report their Q1 in late April: Macy’s (M) on May 10th, Kohl’s (KSS) & Nordstrom’s (JWN) May 11th, JC Penney (JCP) on May 12th, Home Depot (HD), TJ Maxx (TJX) on May 16th, Target on May 17th, Walmart (WMT), Gap (GPS), Ralph Lauren (RL) on May 18th, Best Buy (BBY) on May 23rd, (LOW) May 24th, Costco (COST) on May 25th.  While expectations are low for most, the stakes are getting higher by the day, which is why we might see one of the S&P’s weakest sectors finally have a bit of bloodletting.

So what’s the Trade? Ideally, I would like to trade a put calendar, selling a shorted downside put to buy a longer dated one, but with implied vol so low, short-dated out of the money puts are too dollar cheap to sell and at the money puts a few months out too cheap not to own. Which leads me to a slightly more complicated trade, a diagonal calendar:

Breakeven on April Expiration and rationale – This trade does best with the stock at or near 40.50 on April 28th. The ideal situation is for the short April28th 40.50 puts to expire worthless and the June puts can then be further spread, reducing risk into the bulk of the retailer earnings announcements. The risk is if the ETF goes higher between now and April 28th as the difference in strikes means it’s a more aggressive trade on short deltas than a same strike calendar. (it is -25 deltas at entry). The gap risk lower does not exist as even if the stock is below 40.50 on April 28th it will still be profitable, but gains would max out at 1.50, but that’s a small probability and can be adjusted if the ETN goes lower in the next 2 weeks.