OK, it’s time to discuss the pop in implied volatility. I last discussed the VIX on March 30th (Volatile Compounds 3/30 – VIX, XIV, VXX VIX Futures). At the time the spot VIX was just north of 11. Since then we seen the broader market drift mostly sideways. Today, in what could turn into something worth watching, the SPX is below its 50 day moving average for just the second time since the post-election rally began. What has been very interesting to watch over the past week was the sneaky drift higher the VIX made into today’s selling. We hit an intraday low on the spot VIX of 10.90 on April 5th. The next 3 trading days saw the market go sideways, yet the VIX went bid and worked its way higher to 14 yesterday. On today’s break below the 50 day moving average in the SPX, the VIX is up 12% on the day to 15.75.

So what’s going on? Up until today what we were seeing in individual stocks was something I discussed last week in this space (Volatile Compounds 4/5 – 30 Day IV) Basically it looked like vol was rising as low April vol was rolling off 30 day measurements of implied volatility and May was becoming more heavily weighted, and May captures earnings season.

But something else has happened that’s really interesting, and that is in the VIX futures. You’ll remember in the March 30th post I talked about contango/backwardation in the futures. At the time, we were in a small contango situation of about 5%, where near-term VIX futures were lower than intermediate term VIX futures. That curve of about 5%, looking 30 days out, is important for the Vol ETNs like XIV and VXX, as it works like decay each day, with XIV collecting and VXX losing each day. 5% was not much of a curve though, and I had this to say:

As far as owning the XIV itself, a contango level of only about 5% is probably not the best time to own, not to mention you’d prefer to catch this thing after a serious spike in the VIX where this would correct in a significant way. The ideal timing to buy the XIV is following a market selloff where the VIX spikes, the VIX futures go into backwardation (the front month is higher than back month) and backwardation is about to reverse to its normal contango.

We are now in backwardation. Here’s a current look at the VIX futures: 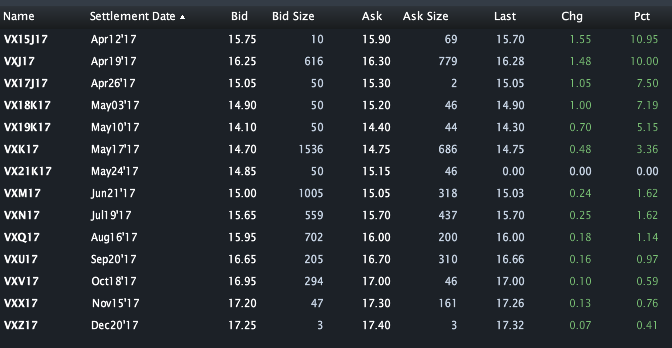 You’ll notice the April 19th VIX futures are higher (16.25) than the May 17th (14.70). That’s backwardation. But you’ll also notice that’s just near term. Looking farther out the April futures are the outlier, from May to December the futures are still in contango. (May 14.70, Dec 17.25). So something is going on near term. Obviously there are a bunch of news the market has seemingly shrugged off over the past month or so, maybe its starting to catch up.

Or maybe it’s just more buyers than sellers, looking for protection while it’s still cheap, as the SPX threatens a rollover through it’s support following a long period of consolidation since the Jan/Feb breakout. We’ve seen similar patterns the past 2 years, one that got ugly in Dec ’15 before putting in a double bottom and then another brief rollover into the election which held the 200 day moving average and hasn’t looked back:

So back to the contango turning into backwardation. As you can see the XIV has taken it on the chin the past few days, down about 13%: 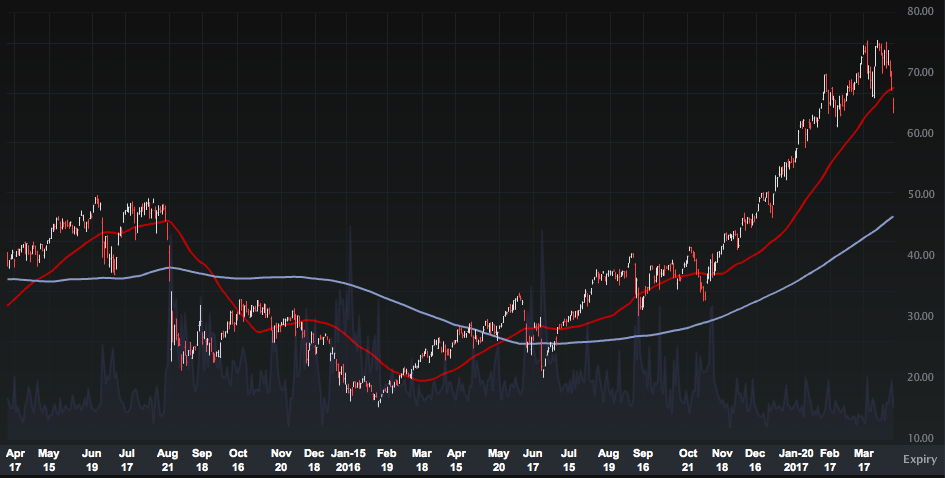 In the grand scheme of things that’s nothing. The more important thing for short vol strategies is whether we see a follow through on the VIX pop, a VIX above 20 would do some serious damage to the XIV, and that would be compounded by he fact that its for now in backwardation. That backwardation is temporary, as from May on out the curve is still in contango. But if May futures were to catch a bid, and go into backwardation vs farther out months, XIV would be facing a headwind in the form of daily decay and that could last weeks or worse. So keep an eye on May futures, if the market holds you could see April futures decline and then we’re right back into contango near term, and would remain in contango from May on out. But not only does May capture earnings season, it also captures the French election and who knows what else. Why are the Aprils popping so much more than May at the moment? ¯\_(ツ)_/¯

So VXX is higher the last few days, and benefits from backwardation and a rise in vol. Is it a buy? No. It’s almost impossible to make money in that thing. Just don’t. But let’s check in our long VIX futures options idea which we like immensely more than VXX. Here it was from March 30th:

With the VIX 15.75 this is worth about .55 (up .55 mark to market from even entry). While the May VIX futures near 15 there’s very little risk here and a ton of potential reward (can be worth $6 with VIX above 20). I’ll continue to update that trade idea and check back in on contango/backwardation and how it’s affecting the Vol ETNs after we see the next move in the markets.